Arrow In The Head: Do Not Disturb

My third Arrow in the Head review has surfaced, and it's for a movie that was actually released to theaters! It's like I'm famous or something. 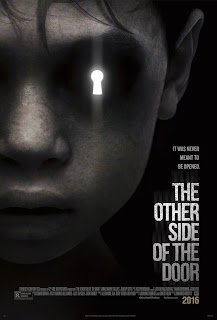 Check out my full review here!

Additional Notes: When my editor assigned this film to me, he apologized in advance if it ended up sucking. I told him that with reviews of The Sand and Dementia already under my belt, this movie was practically Citizen Kane. I was right, at least in the sense that it ended up being crazy boring. I thought an Indian-set supernatural flick might have something unique to offer, but I was dreadfully wrong. At least it’s kind of fascinating in the sense that it unwittingly acknowledges Hinduism as the One True Religion while obscuring its tenets into oblivion beneath a generic, Catholic-lite possession story.

The Other Side of the Door is chock full of clichéd nonsense: lots of shadowy figures pointing at spooky things and seemingly innocuous children with their faces turned away from the camera that the movie pretend you can’t predict are gonna be revealed to be creepy. We even black out our paranormal bingo cards with a ghost-sensing dog and a mystical ethnic servant. It’s an embarrassment of riches!

In my review, I mentioned the film’s ear-bleeding ADR, but let me get into devilish detail. Dog growling is superimposed over a happily wagging tail, and that’s just the beginning. Creepy observers keep making a strange chant that constantly fails to match their lips (it’s more than a little like an Ariana Grande music video), but these people are so strictly non-supernatural that the sound only emphasizes how haphazardly conceived the film is. It’s a dull slog that devolves into a sloppy and confusing third act. One to avoid.

TL;DR: The Other Side of the Door is a bland, milquetoast venture that's hardly worth anyone's time.
Rating: 5/10
Word Count: 1169
Also sprach Brennan at 10:05 AM