Now that I’ve finally whittled down my backlog to nothing, I’m free to be a movie glutton once more, necessitating another set of mini reviews. These two pieces are about island-set zombie films, both screened for Zombie History Month on the Scream 101 podcast.

The Serpent and the Rainbow (Listen to the Scream 101 episode here.) 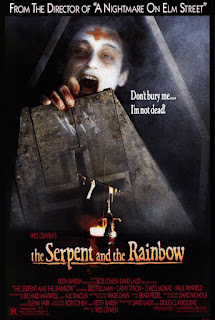 Dennis Alan is sent to Haiti to search for a drug that supposedly brings the dead back to life and gets himself embroiled in voodoo rituals and wicked politics along the way.

And thus continues my unstructured marathon to fill in the gaps of my Wes Craven viewing following his tragic passing. The Serpent and the Rainbow is one of the biggest titles I had not yet seen (the film community isn’t exactly clamoring to reclaim Cursed), and it’s one I missed due to a chronic disinterest in the subject matter. My first exposure to cinematic voodoo was I Walked with a Zombie, a stultifying affair that did not leave me slavering for more. However, I’m happy to say that my experience this time around was exceedingly pleasant.

Another factor that made me dubious was the fact that Craven didn’t write the script himself, something that only seemed to work with the Scream movies. That may have been the case, but this material (including the nonfiction book it was based on) is so compatible with his sensibilities that it’s no mystery why he chose to pursue it. The film was hobbled by an immensely difficult production (while the final product was a Wes Craven movie, the behind-the-scenes struggles could have made a great Hitchcock thriller), but it’s just as idiosyncratic as any of the director’s 80’s flicks.

The Serpent and the Rainbow has one of the loosest narratives in Craven’s career (remember this is the man who wrote Shocker), but this allows him to work at a level of pure style that’s undeniably effective. His obsession with nightmares continues full force here, but his “rubber reality” is far less intrusive than it had been in his non-Freddy flicks (not to throw Shocker under the bus again, but…). It arises organically from the material, steeped in mysticism and illicit drug use as it is, providing a stunningly eerie atmosphere and some of his best imagery ever. One nightmare sequence, which features Bill Pullman trapped in a coffin that’s slowly filing with blood, is a masterpiece of dream logic that’s as visually arresting and viscerally intense as anything in A Nightmare on Elm Street.

The scenes set in reality are hardly less jarring. Two violent moments are particularly stomach-churning (let’s just say Bill Pullman’s family jewels are put on display in a bad part of town), and a third act collision between the upper-crust white world of Boston and voodoo principles is a gleefully dark spectacle that calls to mind the best of Sam Raimi.

Moments like these peppers the film, making up for the near total lack of a plot with their boundlessly creative saging. You see, thanks to behind-the-scenes shenanigans, The Serpent and the Rainbow has some gaping narrative holes that are papered over with an intrusive Blade Runner Director’s Cut-esque voiceover. It’s like the missing jigsaw pieces of the film are filled in with random bits from the Maltese Falcon puzzle. There are definitely some solid themes present, including a Craven trademark – science vs. faith – but the film’s structure is less Empire State Building and more Leaning Tower of Pisa.

These plot flaws crop up especially during the rushed finale, when the truly menacing political tyranny/voodoo master morphs into a dime store Freddy Krueger and is defeated pretty much instantly by some deus ex stupida faux-mystical nonsense. As you can see, the film is far from perfect, but as a gallery for a talented cinematic mind working at full steam, it’s tremendously effective. Imagery from The Serpent and the Rainbow will stick with me forever, even as the actual story has already faded to a miniscule blip on my mind’s horizon. 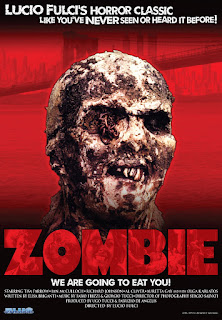 
Anne Bowles is distraught when her father’s boat washes up in the New York harbor. She teams up with a reporter and two vacationers to find the island where he disappeared, whereupon they are attacked by a plague of zombies.

Zombie is both the second Lucio Fulci film I’ve screened for the podcast and the second I’ve seen in my life. Obviously my frame of reference is not vast, but here’s my fast and loose takeaway. The Beyond is better, but Zombie really whet my appetite for further Fulci exploration. One of the first Italian zombie flicks to burst from the gates after the massive success of Dawn of the Dead (recut in Italy by Dario Argento and titled Zombi, hence this unofficial sequel’s Italian title – Zombi 2), Zombie set the precedent for the years of gore and undead mayhem to follow.

Though Zombie doesn’t feature as much of the inimitable Fulci style as his other works, it starts off with a bang- quite literally. The very first shot mimics the end of The Great Train Robbery. A gun is pointed directly at the camera, pausing menacingly before it shoots a covered figure in the head. Before any credits, characters, dialogue, or discernible locations have been introduced, Zombie has already made an indelible mark, proving itself as a violent, jarring movie from the get-go.

Of course, it takes a long time for Zombie to regain that momentum, entering as it does the “setup” part of the first act. In a traditional movie, this is the section where we meet the characters and discover their personalities, goals, and conflicts. In a Fulci movie, it’s where we watch meatbags prepare to head to the place where they are destined to get punctured. Zombie’s setup is a particularly drawn-out one, mindlessly wasting valuable minutes on Fulci’s biggest weakness: characters. Tisa Farrow may have a Mia in her bloodline, but her go-to trick of bulging her eyes and pretending her head is slowly filling with helium does little to offset the stolid blandness of the obviously-too-old male lead Ian McCulloch, whom the movie strains to pretend is a strapping hero type.

However, once the engine revs up after a couple sputtering stalls (including a scene where a zombie fights a shark that defies the laws of movie physics by somehow being kinda boring), Zombie kicks into high gear. The red tempera paint flows freely as the undead rise for a solid half hour of zombie carnage. A siege on a hospital gets a little repetitive, but if there’s one thing you can’t say about Fulci, it’s that he lacks diversity in his violence. We get neck biting, arm ripping, head splitting, and the iconic “splinter through the eye” sequence, which has the weakest effects in the whole film, but by the point they arrive, you have already been sold by the tension and that dazzling shot of the eye in alarmingly close proximity to impalement.

The gore isn’t the vast smorgasbord that The Beyond presents, but if anything the film is even more Italian. The movie literally stops in its tracks for some topless scuba diving, and a showering woman is thoughtfully reflected at all angles by a thoughtfully placed vanity. This is a crass, over-the-top, exploitative husk of a film that occasionally slips into a sort of feverish artistry (a scene where the characters realize they’re camped in a graveyard is a deliciously slow-drip spine tingle, and certain shots –a vertical angle through a boat’s sails, a shaft of light on a wall widening as a door creaks open… - are undeniably suave), and that’s the perfect evocation of the Fulci cinematic philosophy.