Children, Have You Ever Met The Boogeyman Before? 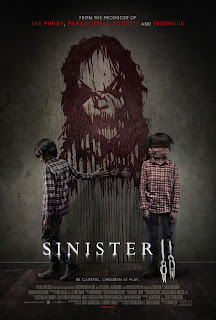 I had reasonably high hopes for Sinister 2. The first one was somewhat of a leaden affair with a twist that assumed we either slept through most of the first half and/or had a subhuman IQ, but the trailer at least made its sequel look like a tighter flick with less expository baggage. And that’s why they should hire trailer editors to actually edit the movies, because that’s the exact opposite of what happened. 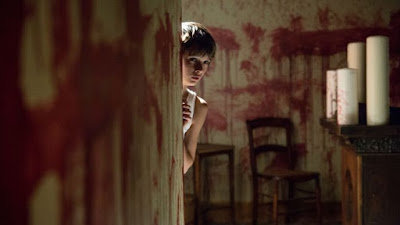 And once again my horror movie optimism is battered mercilessly. My inner Pollyanna is on life support.

Sinister 2 isn’t so much a continuation of the first film as a direct assault on its established mythology. Ex-Deputy So-And-So (James Ransone), the film’s only returning character, is now a private detective who, in his spare time, is finding properties that have been haunted by the evil child-corrupting demon Bughuul and burning them down. As he approaches a supposedly abandoned house in Illinois, he learns it is being inhabited by Courtney Collins (Shannyn Sossamon) and her twin sons Dylan (Robert Sloan) and Zach (Dartanian Sloan), who are on the run from an abusive father.

Of course, Bughuul has targeted the kids, despite his established MO actually placing him somewhere near California, according to Sinister. The spirits of his captured children are hard at work corrupting the boys by showing them nasty home video footage of them murdering their families, supposedly flipping the script and displaying Sinister’s plotline from the child’s perspective rather than the parent’s, even though it really doesn’t make much sense at all. The kids are led by Milo (Lucas Zumann), who looks like the preppy dude from The Purge if he was a decade younger. 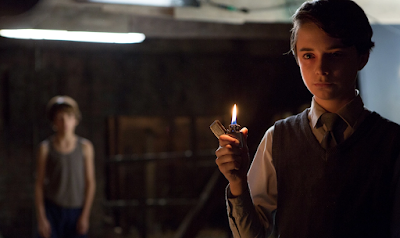 And skipped a couple acing lessons.

I think the biggest tragedy of Sinister 2 is that it actually could have been a pretty great film. All the ingredients are there: a dysfunctional family, an eerie parallel for abuse, rival twins with split devotions, and a possible treatise on how holding a camera can separate us from moral culpability, à la Nightcrawler. The sculpture is hiding in that chunk of marble, but someone down the line forgot to pack the chisel, leaving them to make do with a handy sledgehammer.

In the Blumhouse canon, Sinister 2 is Thor: The Dark World. Following a rote original that didn’t really bring anything new to the table, it’s a sequel that looks and acts like all of the other movies, yet to an astonishing degree is pretty thoroughly an unmitigated failure. Now, Marvel’s lows are considerably higher than Blumhouse’s, so let’s not get carried away with that comparison, but it needs to be said that Sinister 2 is pointless to the degree that it actually compromises the meager quality of the original. 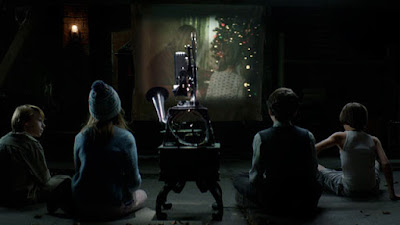 Which, as you may recall, isn’t even a movie I enjoyed as much as freaking Unfriended.

Everything good about the original is twisted into an unrecognizable shape and the malformed lumps that marred it are now diamond hard kidney stones squeezing through the urethra of your mind. Exhibit A: The genuinely bone-chilling murder tapes have been perverted into a dull slog of deaths that are well-rendered, but either too ordinary to be memorable (freezing to death) or so ludicrously outré it feels like Baz Luhrmann guest directed them (an alligator leaps from a swamp to devour a hanging family). Gone is the uncanny, haunting imagery. In its place is workmanlike efficiency and a genuine confusion about how the first movie actually functioned.

And that was something I actually liked. Don’t even get me started on how the original’s dumbass predictable twist is actually repeated as though it were a new revelation instead of something that has been patently obvious since the trailer back in 2012. Or how the shoddy, disjointed climax is now just a catwalk of annoying horror tropes that aren’t even necessarily from Sinister’s subgenre. Or how… You know what? If I don’t stop here, I may never stop. 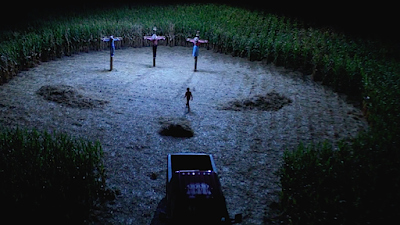 Step one is admitting you have a problem with Sinister 2.

Sinister 2 isn’t the worst horror movie ever made (as if anything could ever beat Zombie Diaries 2: World of the Dead), but it’s just such a programmatic slog that it ceases to be scary in any way, shape, or form. Of course, it’s mainly asking us to be spooked by fully lit children with ash smeared on their faces and a demonic symbol dripping Flash-animated Goosebumps blood on a laptop (apparently the ancient demon Bughuul has been taking computer classes), so there’s that.

But even the famous Blumhouse jump scares are telegraphed entire reels ahead of time, require characters to perform sublimely idiotic acts in order to manifest, and just generally reek of pallid flop sweat. Plus a bunch of kids make the “shh” motion approximately 900,000 times because it’ll look cool in the trailer, and not out of any actual need to be quiet. One little girl ghost actually does it twice in thirty seconds to a kid who hasn’t discernibly moved. It’s about as exciting as a tall glass of Tab.

The one saving grace of Sinister 2 is James Ransone, who gracefully makes the transition from wisecracking comic relief to bedraggled hero. His character scenes are genuinely funny, and his presence provides a real human anchor for the cardboard goings-on. In fact, none of the actors, especially Shannyn Sossamon, do a bad job. It’s just that their motivations are so murky they tend to flounder with their characters.

My advice would be to not even bother with the Sinister franchise. The first one is just barely good enough for a recommend, and if the series continues in the way it’s headed, it’s already well past its prime (which peaked somewhere in the series’ first three minutes). You’d be better off with the Insidious movies, even taking into account the second film’s general execrableness. Anything is preferable to this plodding, drab nonsense.