Merry Christmas! Once again, Santa Claus has snuck down our chimney to deposit a bloody good holiday shocker under the tree. I hope you left out cookies, because at Popcorn Culture, Santa gets a little axe-happy. 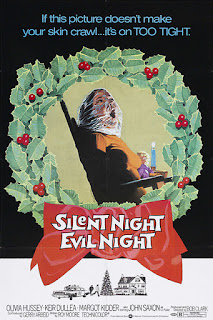 1974, man. In a year nowhere close to the landmark dates of slasher history (roughly 1960 with Psycho, 1978 with Halloween, and 1980 with Friday the 13th), two enduring classics of the genre came into fruition. I, of course, have already spoken at length about the former, Tobe Hooper’s sweaty masterpiece The Texas Chain Saw Massacre. But our second proto-slasher is one that gets significantly less admiration but deserves perhaps even more: Bob Clark’s Canadian thriller Black Christmas.

Now, before you ask, yes that is the same Bob Clark who directed the seminal holiday classic A Christmas Story. 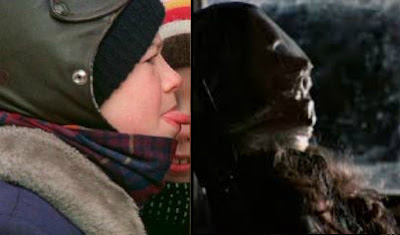 In Black Christmas, the Phi Kappa Sigma sorority is beset by obscene phone calls from a menacing stranger, whom we the audience have just seen climbing the trellis into the attic via a nifty POV shot, four years before Halloween officiated the marriage between slashers and Steadicam. One of the sisters, Clare (Lynne Griffin) is shortly smothered with a plastic bag and dumped in the attic the day before the girls leave for Christmas vacation.

The remaining sisters are Barb (Margot Kidder), the lascivious drunk; Phyllis (Andrea Martin), whose perm is her most dominant character trait; and Jess (Olivia Hussey), who is pregnant and wants an abortion despite the objections of her angsty pianist Jim Henson-haired boyfriend Peter (Keir Dullea). As the girls and the police search for Clare (nobody thinks to look in the attic because the movie needs to reach feature length), the phone calls and murders continue, much to the chagrin of Lt. Ken Fuller (A Nightmare on Elm Street’s John Saxon, already well on his way to being typecast as a cop). 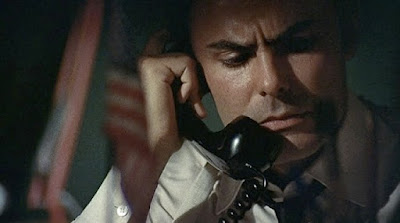 I guess it’s better than being typecast as a garbage man.

The things that make Black Christmas a classic are almost the exact opposite of The Texas Chain Saw Massacre. Where Hooper’s film was unpolished dynamite, Black Christmas is a tensely coiled, glistening piano wire. Where TCM was a visceral gut punch populated by cardboard archetypes, Black Christmas is a sophisticated slow boil filled with characters that aren’t exactly complex, but at least shaded and human. And while Chain Saw remains my favorite with is raw brutality, there is absolutely no doubt whatsoever that Black Christmas is a better made film by such a margin that it puts wide-ruled notebook paper to shame.

Actually focusing on story rather than torturing the audience, Black Christmas is a much more layered film. The tension it creates is built around characters, who are forging a path through a story that is still deviously simple but has quite a bit more drive than TCM’s nonentity. It’s the Range Rover to Hooper’s Prius. There are plenty of unique features of the plot, but two stand out above all else, the first being the film’s genuinely fun sense of humor. It’s not often that a slasher film elicits chuckles on purpose, but Black Christmas does so with aplomb, peppering the door murders with sweet holiday mayhem that makes the transitions between the two even more jarring. I hate to give jokes away, but let’s just say you’ll never look at your pet turtle the same way ever again.

The second key element of the script is that, piggybacking off the already extreme (for the time) nature of the horror material, Black Christmas seizes the opportunity to weave in a very controversial discussion about abortion and how it affected men and women in the 70’s. The film brings with it a stunningly solid sense of female reproductive rights while presenting a chilling parallel to the ironic viciousness of radical pro-Lifers in the unhinged Peter (who stalks around sulking, hair all in a tizzy). 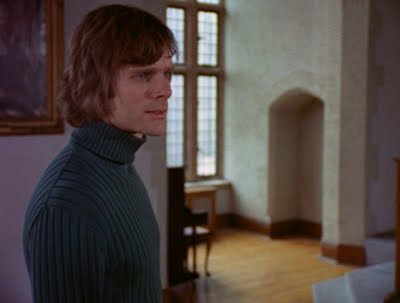 Tell me this guy couldn’t star in a Davy Jones biopic.

But even more than the plot, the film is a masterfully crafted piece of cinema. The cinematography and editing are superb, but the truly striking feature of Black Christmas is its sound design. Eerie nondiegetic tunes and dissonant in-scene sounds overlap and interplay in an exquisitely composed aural tapestry. In my favorite moment, the sound of Peter angrily smashing his recital piano becomes the score for the next scene, providing a crackling current of unhinged fear. There are dozen of innovative, chilling moments like this suing everything from electric generators to repurposed Christmas carols as an integral part of this sonic puzzle.

Partially because of the soundscape, partially because it’s just overall a damn good film, Black Christmas still has the juice to tingle the spine. Though there is some semblance of backstory for the killer stuffed in the cracks, he remains unexplained. Plus, the more we see of his actions, the more we learn that he’s utterly unpredictable, which lends the film an extra frisson of tension because it’s truly impossible to predict what he’s going to do or say next. His kills are filmed with kinetic artistry, so despite their lack of gore (a typical complaint for films of this vintage) they still strike a nerve with their visceral impact and the unsettling juxtaposition of their sheer beauty, especially in a pivotal scene with a glass unicorn-cum-impaling device.

Black Christmas is a nasty, unrelenting film that actively fights the cheery festivity of its set design and soundtrack. The combination of Christmas and bloody murder would be made again and again to varying degrees of success, but never would there be a holiday horror flick so admirably crafted as Black Christmas. The yin to Texas Chain Saw’s loud, rusty yang, Black Christmas is a deranged masterpiece that make me proud I chose to live my life within the slasher genre. After all, there’s no place like home for the holidays.