Cardboard Science: Over A Barrel 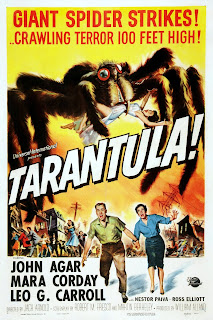 Year: 1955
Director: Jack Arnold
Cast: John Agar, Mara Corday, Leo G. Carroll
Run Time: 1 hour 20 minutes
It's that time of year again! The leaves are turning colors (if you live somewhere other than California, at least) and the weather has cooled (again, if you live elsewhere - it is currently 90 degrees as I'm writing this), and as Halloween approaches, I am once again delivering on my blood pact with Hunter Allen of Kinemalogue. That's right, it's time for the Ninth Annual (that number can't possibly be right) Great Switcheroo, where I give him three of my '80s slasher titles and he generously trades three '50s B-movies. Keep an eye on his blog, where those reviews will be coming a little later in the month. But I like to get a jump on things and start the month big, and what could be bigger than Tarantula?
Tarantula, in addition to being one of the films mentioned in the "Science Fiction, Double Feature" opening number of The Rocky Horror Picture Show, is chock full of folks who have cropped up in Cardboard Science entries past. This includes everyone's favorite squarejaw John Agar (the star of none other than The Brain from Planet Arous), Mara Corday (of The Giant Claw), and director Jack Arnold (who brought us both It Came from Outer Space and Creature from the Black Lagoon). 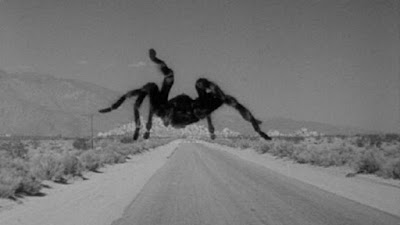 He's so prolific, it's like he's got eight legs or something.
Tarantula follows Dr. Matt Hastings (John Agar) of Desert Rock, Arizona, as he investigates the mysterious death of a man inflicted with an elephantiasis-esque disease. This brings him into the orbit of Professor Gerald Deemer (Leo G. Carroll), who is seeking to discover a nutrient that will feed the Earth's booming population, as well as his beautiful new live-in assistant, Stephanie "Steve" Clayton (Mara Corday). Of course the nutrient causes uncontrolled growth in animals and of course Deemer injects it into a tarantula, because why wouldn't you? There's a fire in the lab and bada bing, bada boom, you've got yourself a giant mutant tarantula taking to the hills. 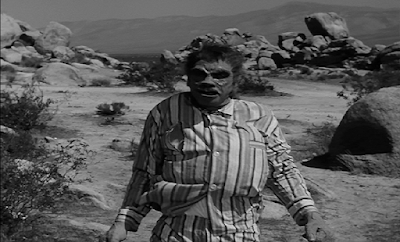 Pictured: The hills, as played by the same two mile stretch of California scrub where they shot every sci-fi movie for 12 years. And a mutant. We'll put a pin in that for now.
So, I've seen my fair share of giant bug films at this point. We had giant killer ants in Them! and giant killer locusts in Beginning of the End. It would be foolhardy to suggest that I expected the special effects in Tarantula to be any good at all. But I've got say, there's just not a lot of there there, even by the standards of these kinds of movies.
The shots of the spider roaming through the hillsides are... fine, though they are not numerous. The plate containing the shot of the spider seems a little fuzzy even at the best of times, his feet never really connecting with the ground properly. Now, don't get me wrong, this is all fine. They did what they could with the technology and budget they were working with.
What's most frustrating about the spider - other than the fact that it's kind of a negligible feature of a movie named Tarantula - is that they can think of absolutely nothing to do with it. There sure are a greatdeal of shots of twitching mandibles inching closer to screaming men, but those get old rather quickly, and there just isn't any pizzazz to the sequence where they battle the humongous arachnid. It really makes you miss the dazzling stupidity of something like The Giant Claw's final battle when all you get is three minutes of the military shooting bigger and bigger weapons at the spider until they succeed. 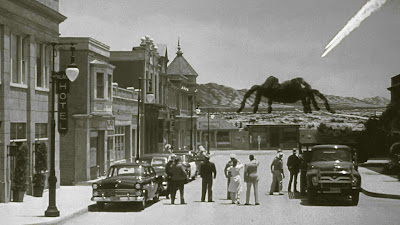 Third time's a charm!
It's not like Them! had a particularly academically rigorous third act, but at least it had folks in the trenches fighting big monsters! Here we are watching people watch a spider get shot three times, and it's a huge radioactive snooze. The movie thrives when it gets smaller, ironically, as there is an incredibly random subplot of human test subjects developing strange mutations. Those effects are solid in exactly the B-movie way you want, and there are also a few shots of caged animals in early stages of growth hormone injection that look quite terrific by any standard.
It's too much to ask that the human plot really carry the weight of a project like this, but the characters here aren't particularly interesting either (with the exception of an extremely minor character - the snooping receptionist Josh). One's knowledge of the genre (as well as the absurdly over-the-top score) might lead one to expect that Agar and Corday are destined to fall in love and at least provide the requisite "they're kissing at the end of the movie even though they've known each other for all of 12 seconds" moment, but that's not in the cards either. Which is transgressive, I suppose, but I rather think it's an accident deriving from the fact that the screenwriters don't seem to care one whit about any of these characters.
Carroll is doing fine work here, providing his scenes with a twinge of menace that the rest of the film is sorely lacking. Otherwise, unfortunately, it's boilerplate all the way down, without enough flavor to make it memorable or even memorably bad.
That which is indistinguishable from magic:

*Forget the tarantula, these people need glasses. They drive down the road and then an ominous sting announces the arrival of the tarantula - from the same direction they were driving in. It's physically impossible to not have noticed it.

*There's something tremendously 1950s about the opening sequence, where a dying man who is wandering through the desert in his pajamas is still wearing dress shoes and socks.
*John Agar's assertion that being in the desert is so boring it makes couples want to fuck is probably still solid advice. His disgusted comments on giving women the right to vote leading to them becoming scientists less so.
*The worldwide population number that has thrown Leo G. Carroll into such a tizzy is 3 billion. Imagine.

*The most terrifying scene in the movie is an early shot when John Agar enters his office, and an extra on a bench is just watching him with lifeless eyes and the broadest grin on his face, like he's advertising Smile 65 years ahead of schedule.