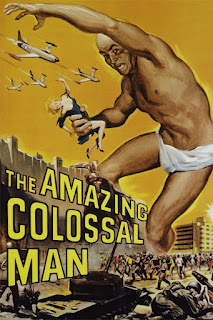 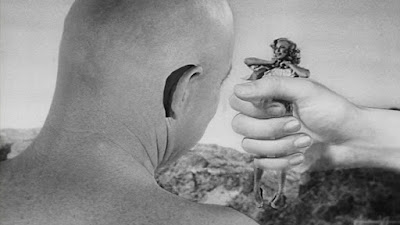 And you know what? It reads exactly like a movie written by both the Cyclops guy and the 50 Foot Woman guy.
The Amazing Colossal Man opens with the military testing a brand new plutonium bomb in Desert Rock, Nevada (not to be confused with Desert Rock, Arizona from Tarantula, a film that has provided fodder for an incredibly specific double feature this month). After the bomb's chain reaction has been set off, it doesn't detonate properly, and the soldiers who are holed up in a nearby trench for some reason are forced to wait until it either goes off or enough time has passed that it becomes disarmed. Unfortunately, this is the exact moment that a small civilian aircraft crash lands right at the foot of the bomb, so the intrepid Lt. Col. Glenn Manning (Glenn Langan) disobeys orders and rushes to the rescue right when the bomb goes off, exposing him to a whole hell of a lot of radiation.
For his troubles, all of Manning's skin and hair is scorched off, though doctors are astonished when it grows back within a single day. Unfortunately, the new out-of-control growth of his body's cells is paired with an inability for his old cells to die, causing him to grow at a rate of 8 to 10 feet per day (something that doctors have established after he reaches a total height of 18 feet in 2 days, which - considering the fact that he certainly started at a height of about 6 feet - leads me to suspect that maybe we actually shouldn't take their word for it). While his fiancée Carol (Cathy Downs) attempts to keep him tranquil while doctors seek a cure, he begins to despair that he will never return to the world that is rapidly shrinking away from him. 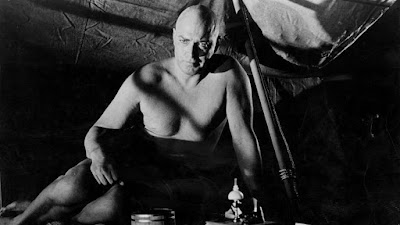 What a hulk! One might even be tempted to call him incredible!
Any time math or science is touched on, The Amazing Colossal Man accomplishes the amazing feat of making every other '50s sci-fi movie look like a pristine, peer-reviewed thesis. I wouldn't dream of sitting here listing all the ways this movie calls upon square-jawed actors to utter the most garishly stupid thing you've ever heard as if it's a basic fact of the world. Especially because there's already a place for that later on in the review. But trust me, it's outrageous, and really won over my bad movie-loving heart.
In every other respect, The Amazing Colossal Man is actually... kinda good? It's certainly good on the scale of this kind of low budget B-movie, even if it can't achieve the elegant heights of actual great movies like Invasion of the Body Snatchers or The Blob. For one thing, it's able to include the title monster a lot more often than a lot of similar projects, because there's no makeup necessary for Langan (nor really a costume - he's in a big 'ol loin cloth for 85% of the movie), and they can make him look big as long as they shove him in a room with some tiny props and keep people from joining him in the frame too often.
For another thing, Langan is delivering a committed and rather unusual performance. Although the character loses his mental faculties at about the point that he goes on a rampage around old-timey Las Vegas, he is otherwise completely coherent while considering his fate. In the hands of any other B-movie actor or screenplay, Manning would probably either face his fate with grit and determination or maniacal panic. Langan finds a completely different route, channeling Manning's rage into the quiet simmer of a man who has already realized his fate is sealed and is only capable of bottling his feelings within gallows humor. This is a much more quiet and contemplative character than a movie like this should even be capable of delivering (see The Cyclops, which handles more or less the exact same character by turning him into a vicious groaning ogre). The last time a movie performance zagged on me so hard from what I would have expected from the character on paper, it was Rebecca Hall in The Night House, and I don't just throw around that comparison lightly. 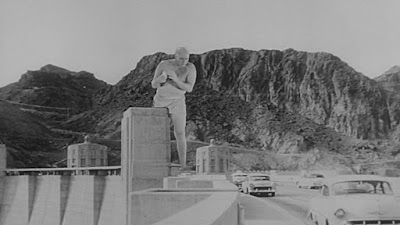 Although Manning could probably throw ANYTHING around lightly, if he wanted to.
Also, The Amazing Colossal Man is quite capable of drumming up moments of tension, which are generally few and far between in Cardboard Science. While almost every entry we've covered is nominally a horror film, it's not often that the films can reach through the many decades of horror cinema between then and now to really shake up any modern viewer. But it has a little something for both gorehounds (some excellent burn makeup, for one thing, and a war flashback with a gruesome scene shooting an enemy soldier in the face) and people who love simmering tension.
That Schrödinger's Bomb opening is genuinely quite tense, and it's followed by a rather thrilling sequence of "women's picture horror" involving Carol trying desperately to find out what happened to her fiancée and is met with a brick wall everywhere she asks. She gets sidelined pretty quickly after that, but nearly everything in the first act works, and the scenes that follow might be patchier more often, but they always err on the side of enjoyable.
Not everything about the giant special effects has aged particularly well. There are moments of bad compositing that make it possible to see objects through the side of his head, for instance. And for some reason, the sound recording in any scene where Carol and giant Manning share the screen is shit awful. But all in all, The Amazing Colossal Man is both well executed within its limits and entirely entertaining. You certainly won't catch me complaining about that.
That which is indistinguishable from magic:

*I've already harped on the delightfully bad science, but this film also doesn't seem to realize that we already did use plutonium in atomic bombs, so it wasn't really necessary to test it out.
*Now that we're talking about it: Holy shit, how glorious is the reveal that his heart is growing slower than the rest of the body because - as everybody knows - the heart only contains one single cell?
*Another particularly fishy moment comes when Manning reaches 10 times his height and a total of 18,000 pounds because apparently he has the density of a dying star.

*When the men are waiting to see if a plutonium bomb within a couple hundred yards from them will detonate, one asks if he can smoke. And he's told "yes, of course you can!"
*It was deeply weird to see a Swift delivery truck show up in one scene, being all 1950s.

*Was naming the news reporter H. Wells stupid or charming? I vote both.