Cardboard Science: 3 Guys, A Girl, And A Sunken Place 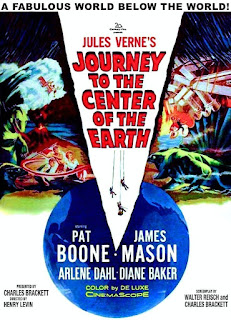 Year: 1959
Director: Henry Levin
Cast: James Mason, Pat Boone, Arlene Dahl
Run Time: 2 hours 9 minutes
An as quickly as it came, another October has gone. Happy Halloween, everybody! Here is the final entry in my annual crossover with Hunter Allen at Kinemalogue, where I assign him 3 Census Bloodbath slasher films from the 1980s and he assigns me 3 Cardboard Science sci-fi B-movies from the 1950s! He promised me he was going to go a little easier on me than last year, and so far he's one for two, considering I didn't really dig Tarantula but thought The Amazing Colossal Man was quite darling. I've heard it said that two out of three ain't bad, so let's see how he did! 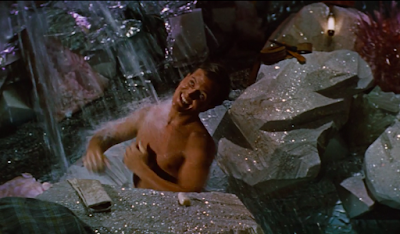 So far, so good.
Journey to the Center of the Earth is adapted from the Jules Verne novel of the same name, following the Scottish geologist Sir Oliver Lindenbrook (noted Scotsman James Mason) just after being knighted. His student Alec McEwan (noted Scotsman Pat Boone) celebrates this by giving him a present, which is a rock. Geologists sure know how to party. When Lindenbrook looks closer at the rock, he realizes it is evidence of a scientist who vanished many years ago while searching for an access point to the center of the Earth.
Mere moments after getting engaged to Lindenbrook's niece Jenny (noted Scotswoman Diane Baker), McEwan is whisked off on an expedition with Lindenbrook to a remote mountain in Iceland. Along with rival scientist's widow Carla Göteborg (Arlene Dahl), local farmer boy Hans (actual Icelandic person Peter Ronson), and his duck Gertrude (Gertrude), they embark on an expedition that will take them deep underground for the better part of a year, in which they will face countless dangers including rock slides, flooding, giant lizards, and the evil Count Saknussemm (Thayer David), who claims this land as his own because his father got there first and then immediately died.

This is just how white people do things.
So, here's the thing about Journey to the Center of the Earth. These fools had money to burn. Rather than being an insignificant little tossed-off B-picture filmed in black-and-white in the scrubland outside Santa Clarita, 20th Century Fox threw a huge budget at Journey and shot it in Carlsbad Caverns in CinemaScope with full color. This film is big, both in the literal and figurative sense. The CinemaScope frame emphasizes the grandeur of the real-life cave settings and the soundstage sets alike, frequently making the characters only minor presences onscreen in order to allow the audience to drink in everything around them. There is also just a generally strong visual sense, even in the pre-journey sequences (in fact, my favorite shot is probably Mason reading a newspaper while walking down the street during a bagpipe parade).
Does this mean it's inherently better than the B-pictures I've covered for this project? Fuck no. It's no Invasion of the Body Snatchers or The Fly or even It Conquered the World. Those films are scrappy and force their lack of budget to work for them, as opposed to this one that is just dripping in sheckles and doesn't feel the need to bother with anything so substantial as well-rendered creatures or a thrilling conflict. Although the characters do get in their fair share of scrapes, the film (as necessitated by the source material) is incredibly episodic and doesn't really lead anywhere. It just kinda gets bored of doing stuff and then ends, after two rather long hours.
This is not necessarily a bad thing, though I think you'd be forgiven if you were upset that Journey to the Center of the Earth was more interested in being a shaggy hangout movie rather than a proper swashbuckling adventure. However, here's the thing. It knows its strengths. The adventure portions of the film start just fine and feature some very nice cavern photography goosed up by otherworldly production design, but they get more and more anemic as it goes along (this is especially true when the "Dimetrodons" show up, as played by poorly composited lizards that look palpably bored to be there, but the moment they actually reach the titular center of the Earth is perhaps the flattest in the movie), but the character dynamics hold up throughout, even if twenty minutes easily could have been cut out of the final run time. 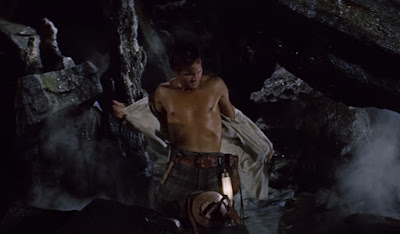 Well, from other scenes. Not from this one.
When you boil it all down, Journey to the Center of the Earth is a tremendously goofy movie, affably kidding around with plenty of out-and-out comic moments. Some of them are pretty cartoonish, even, like the scene where the two leads are trapped in a silo and hear Gertrude's beak tapping against the wood, whereupon they assume someone is delivering them a message in Morse code. And some of them are more clever and dialogue driven, including a play on the word "inadvertent" that I rather enjoyed. It is not often that a Cardboard Science features a single joke that lands, let alone a slew of them. While comedy is one of the most subjective mediums there is, this really worked for me personally. But I can't imagine any person with a good heart failing to enjoy a scene that presents, for instance, James Mason sliding down a ramp into a pile of feathers.
This makes its failings as a genre film more forgivable, especially when compounded with the fact that it Journey generally luscious to look at in any scene that doesn't feature giant lizards. I suppose I should mention the actors as well. Dahl and Mason both know exactly what kind of movie they're in and calibrate their performances well, as Boone delivers a charmingly dopey lead performance while drifting in and out of a Scottish brogue as gossamer thin as a cobweb (Mason wisely does not attempt an accent even a little bit). They shoehorned in some songs to keep Boone happy, and those moments are always extremely peculiar, but they do at the very least provide texture to a film whose runtime demands some.
All in all, I had an extremely enjoyable time sitting through Journey to the Center of the Earth. Will you? Fuck if I know. If you're looking for a more action-packed affair, stick with the Brendan Fraser one, but if you're just looking to take a nice warm bath in some late '50's nonsense, you could do a whole hell of a lot worse.
That which is indistinguishable from magic:

*The cartoon fwing noise that the magnetic poles make when divesting the characters of their gold is truly adorable.
*I'm sorry, but I fail to see how those backpacks are big enough to carry a supply of salted beef that would last 256 days.

*Sir Lindenbrook takes every opportunity when talking to Carla to make this film into a terrible sitcom about the battle of the sexes.
*It is heavily implied that the Count is evil because he is (gasp) a socialist.
*You may have already noticed the flavor of the screenshots I have been sharing throughout, but there's a word to describe this film and it's not hetero-erotic. 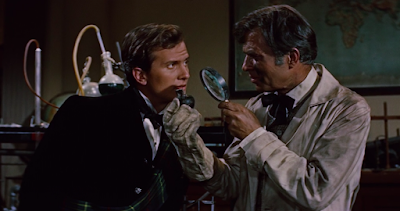 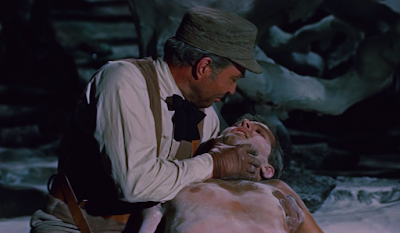 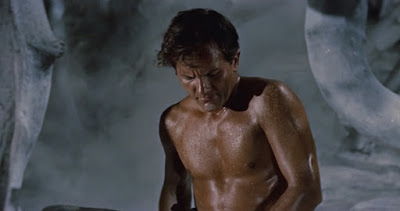 I can't quite put my finger on it.
Sensawunda:

*Producer Charles Brackett reportedly said he wanted to make a film this silly and adventure-driven because "I'm tired of all these films based on thoughts at the back of sick minds." He must not have been a fan of Queen of Outer Space, huh?
*There is an incredibly random moment where Count Saknussemm quotes Poe's "little slices of death" line, uncredited. I really don't know what to do with that, so I'm putting it here.