Reviewing Jane: None Of Us Want To Be In Calm Waters All Our Lives 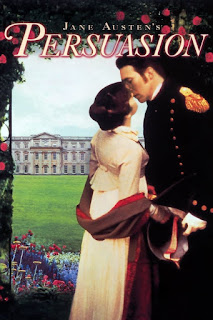 Year: 1995
Director: Roger Michell
Cast: Amanda Root, Ciarán Hinds, Susan Fleetwood
Run Time: 1 hour 47 minutes
MPAA Rating: PG
As I've discovered over the course of this marathon, 1995 seems to be the cornerstone year that was responsible for bringing Jane Austen back to the rabid mainstream popularity she continues to enjoy today. That year gave us perennially popular Pride and Prejudice miniseries, the iconic Emma adaptation Clueless, the Golden Globe-winning Sense and Sensibility, and Persuasion. It's only natural that one of them should be the least impactful, and Persuasion just so happens to be the unlucky winner. 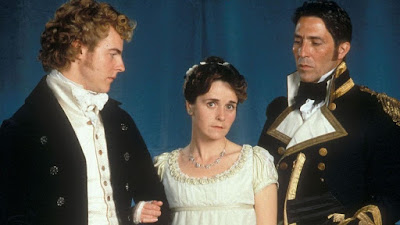 But we're not here to review SOME of Jane Austen. We're here to review ALL of it, dammit!
Persuasion, based on Austen's posthumously published final novel, tells the tale of Anne Elliott (Amanda Root), Austen's oldest heroine by a long shot. In her youth, she was convinced (perhaps one might say persuaded) by her parents to reject the proposal of Captain Wentworth (Ciarán Hinds), but she has never found a more suitable match in the intervening years. When Wentworth returns to town, there are a variety of romantic travails that throw other men and women in their path until they can rekindle their dormant romance. 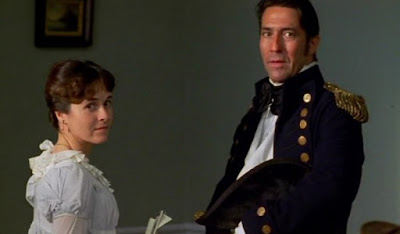 "Romance" (noun): Two human beings staring awkwardly around themselves while standing several feet apart.
We've encountered plenty of BBC TV movies in our time in the Jane Austen sphere (and even though we're approaching the end of this marathon, there's at least one more coming down the pike - never underestimate the BBC's ability to dig back into that Regency-era costume closet), but this is the first one that's actually just an episode of a television show, specifically anthology movie series Screen Two. Any mention of Screen Two was scrubbed from the publicity material for American release (presumably capitalizing on the success of the aforementioned much more popular Austen projects), but the ghost of its origin remains, if only in the visibly meager budget.
But regardless of its slightly unique creation, I am well trained on how to deal with these BBC TV movie adaptations: by yawning and fluffing my pillow. Persuasion is as flat and affectless in its presentation of Austen's novel as you can get, delivering the dialogue in clipped, dry tones and hustling through all the material it can without raising a fuss. When it's time to go, it makes sure to tidy up a bit and slip quietly out the door. It is not here to challenge, get creative, or even entertain. 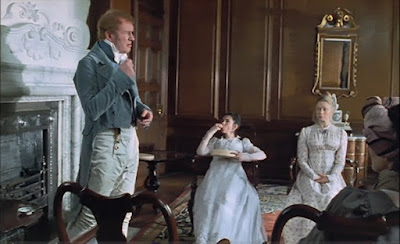 It's an audiobook wearing a frock.
Persuasion does come briefly to life in some of the funnier moments of the novel, the only one presented with any sense of visual flair being a montage of women gossiping to a visibly bored Anne, all while clutching the same color teacup. But it can't even do anything interesting with one of only two scenes in Austen's novels that could considerably be called action scenes: where a young woman falls off a stairway at the beach and hilariously knocks herself into a coma.
This scene is presented in enthrallingly tedious slow motion, without a scrap of music underneath. We just see a woman slowly falling past the screen as if floating in zero gravity, with the non-slow motion  soundscape of seagull squawks and crashing ocean waves not doing anything but reminding you of just how long this shot has been holding.
And while I wouldn't call the performances bad, they certainly aren't delivering enough heaving romance to make the stiffness of their surroundings worth it. Ciarán Hinds is certainly capable of great work, but he isn't asked to do much besides stand stiffly and recite lines in a staid, measured (read: boring) tone. And Amanda Root has fallen into a bad habit of exaggeratedly bulging out her eyes and staring at the people around her. It's like watching a block of wood romancing a surprised owl.
Jane Austen films can either be funny, romantic, or both. When it has neither, it's not worth watching. And Persuasion isn't nearly funny enough to get over how wan and uninteresting the romance is. It's not the worst straight Austen adaptation I've seen (for my money that's still 1999's Mansfield Park), but it's certainly not one I'm adding to the shelf.
TL;DR: Persuasion is as cheap and bland as a straightforward Austen adaptation can get.
Rating: 5/10
Word Count: 747
Other Films Based on Persuasion
Persuasion (Michell, 1995)
Bridget Jones: The Edge of Reason (Kidron, 2004)
Also sprach Brennan at 9:05 AM