Reviewing Jane: I Shall Be Miserable If I Have Not An Excellent Library 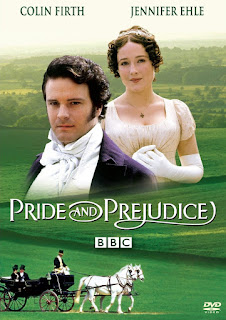 Now now, you didn't think that watching every single available motion picture based on Jane Austen would end the marathon, did you? I've steered clear of series, web series, and miniseries adaptations because I do value my time somewhat, as hard as that may be to believe. But I couldn't leave this marathon dormant without exploring the reason almost everything we've covered even exists: the 1995 BBC miniseries Pride and Prejudice.

The miniseries, which ran for six episodes between September and October 1995, became an instant worldwide phenomenon, selling out the entire run of 12,000 video sets within two hours, going on to sell an additional 58,000 by the end of the week despite the fact that, in the words of a BBC spokeswoman, "viewers [were] able to tape the episodes at home for free." Jane Austen has always existed in the popular consciousness (certainly if this wasn't the case, we wouldn't have had a lush production of Sense and Sensibility, a modern teen adaptation of Emma, and a considerably less lush mounting of Persuasion hit that very same year), but if all the material before and during 1995 was the foundation, Pride and Prejudice was the fucking massive skyscraper bursting out of it. 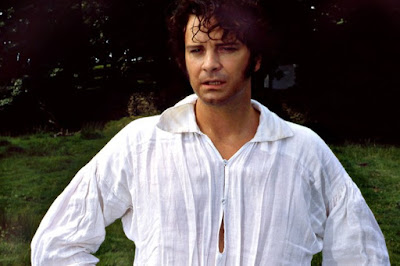 Speaking of massive skyscrapers, we couldn't have panned down, Mr. Langton?

Yeah yeah, the plot of Pride and Prejudice. Let's not waste too much time on this. Lizzy Bennet (Jennifer Ehle) has a gaggle of unmarried sisters, Jane the eldest (Susannah Harker) falls in love with new rich neighbor Mr. Bingley (Crispin Bonham-Carter), whose best friend Mr. Darcy (Colin Firth, who would go on to play another Mr. Darcy in Bridget Jones' Diary, one of the aforementioned many films that owe their very existence to this miniseries) is kinda mean to her. They fall in love eventually because fixing a man is the ultimate romantic fantasy! 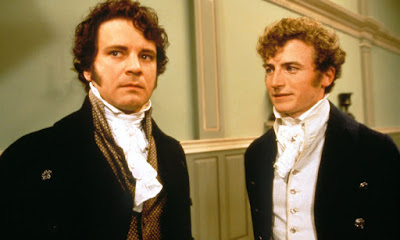 Also yes, Crispin Bonham-Carter is related to Helena Bonham-Carter (they're third cousins), because there are only like five families in England.

We have a lot more ground to cover than usual, so let's get cracking. I'll be reviewing the series as a whole rather than as individual episodes, because they were all directed by the same man and also because the way the story is sliced into sixths seems pretty arbitrary. The benefit of this structure is getting to spend a lot more time with the cast of characters, most of whom are splendidly performed.

One person you'll wish you has spent less time with is Mrs. Bennet (Alison Steadman), whose cartoonish pantomime buffoonery does get a little grating by the finale despite being a pretty accurate depiction of the character as written. But the other cartoon character of the piece, the sniveling reverend Mr. Collins (David Bamber) is by far the best iteration of that particular role I've seen. And trust me, I've seen many. Timothy Spall owes his entire career to this greasy, conniving, skin-crawling performance.

And obviously I should go no further without talking about Colin Firth. I'll admit I'm not a devotee to any particular iteration of Darcy (in fact the only Austen hero I give a particular rat's ass about is Colonel Brandon in Sense and Sensibility because I ship him and Elinor real hard), because the men in these stories are uninteresting pretty objects to be presented to the heroine once she has completed a romantic journey (Jane Austen, my feminist queen!). But Firth really nails the "standing in corners brooding" angle something fierce.

Unfortunately, I think the biggest liability in the cast is Lizzy Bennet herself. Nothing against Jennifer Ehle's skills. In fact, I think she imbues her Lizzy with the most real, tangible wit I've seen in any iteration. You can see the cogs turning in her mind when she's about to crack wise. But she has a certain movie star stiffness that drags you out of the story, which recalls Greer Garson's portrayal in the 1940 Pride and Prejudice. She has the advantage on Garson that she's not a clear decade and a half older than her character, but you wouldn't know that by the way she carries herself. Ehle is giving a Movie Star performance, all glittering eyes and catlike poise and best sides turned to the camera just so. You can see the artifice in her acting, and while that works in certain circumstances, those circumstances do not include a period piece that demands a kind of realism from its leads (if not its side characters) to properly ground them in the Regency era. 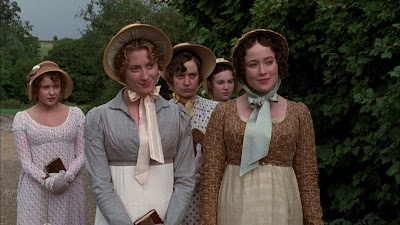 See that face she's giving? I hope you like it, because you're about to see a LOT of it.

Another benefit of the miniseries format is that the screenwriter is not obliged to cut all the comedy bits in favor of heaving romance. Finally we have someone who looked at the novel and said, "why not both?" And this Pride and Prejudice is quite genuinely funny, despite everything implied by stiff, starched BBC sets and costumes.

The romance, on the other hand, does unfortunately suffer a smidge from some truly dreadful 90's TV moments. Episode 4 in particular is very ill-used by goofy-ass cross-dissolves to flashbacks of scenes we just saw and alarmingly clunky superimposed shots of Darcy's face. And while I appreciate its attempts at jazzing up the many scenes of characters reading letters, the way that characters react in perfect timing with the voiceover reading the letter is more disconcerting than compelling.

But what Pride and Prejudice needs to get right, it does: have two beautiful people eye-fucking over a pianoforte. So really, who could complain?