Reviewing Jane: We Certainly Do Not Forget You, So Soon As You Forget Us 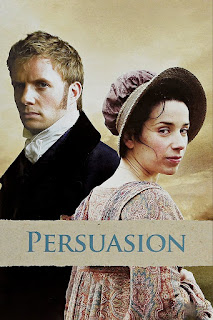 Oh frabjous day! Callooh! Callay! This is the final feature film of the Reviewing Jane marathon! Of course, like any marathon I do, that comes with a big fat asterisk. The second they make another one of these things, it's back to the drawing board (and even with the pandemic, I'm sure Hallmark will find a way to crank out a dozen or so this Christmas). And also I haven't included 1948's Emma, which I've been unable to find anywhere, not that I need another Emma adaptation in my life when we have two more or less perfect ones on our hands as it is.

And though I've sworn off including miniseries (I'm not a TV reviewer, and also including them would increase the length of this marathon by a nerve-shattering margin), I wouldn't be doing the genre justice if I didn't review the 1995 Colin Firth Pride and Prejudice sooner than later. But asterisks aside, this is a big day! Let's dive into the final adaptation of Jane Austen's final novel, 2007's Persuasion. 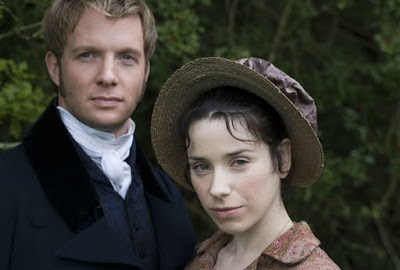 And of course, every single publicity still features the couple standing with each other even though this is the story where they're actually together like 1.5% of the time. 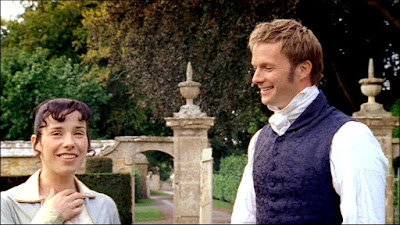 For all we know, Wentworth is also her cousin, but at least he isn't Mr. Elliott whose proposal involves his fervent wish that she not be forced to change her last name.

So yeah, we covered a different BBC TV movie adaptation of this same novel literally yesterday, but at least this one stars Sally Hawkins, who's a consummately terrific actress. Terrific enough that the lazy crutch of having her write diary entries in voiceover to narrate her internal thoughts and feelings almost doesn't fail to work.

Honestly, every aspect of this one is a step up, even if it's just a half step. The character humor here is much more well-rendered, and provides a jovial spirit that buoys the more somber autumnal tone of the romance. A special standout is Amanda Hale as Anne's hypochondriac sister Mary, whose illness gets more or less severe depending on whether or not she wants to do what she's asked. She plays the character like a drunken pantomime witch, and it's certainly not "realistic," but it's perfectly pitched camp hilarity.

This adaptation likewise more capably handles the "action" sequences that the previous one rendered as wet noodley as possible. Louisa falling off the step on the beach and launching herself into a coma (still the most hilarious Austen scene to see adapted to film) is more sudden and shocking, and there's a scene where Anne resets a child's dislocated collarbone with a sickening snap unlike anything I might come to expect in a period piece romance. 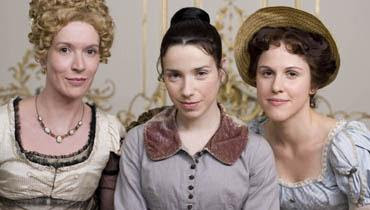 These ladies aren't messing around.

The only real flaw I can find with this Persuasion is its curious tendency to present scenes in a stuttery, color-leached handheld style that wouldn't be out of place in an early 2000's J-horror film. But otherwise every element has the "good not great" quality of the best BBC adaptations.

I will say the romance here is more felt than last time, though it is still necessarily chilly, being as it is about a romance that is already beyond the point of its passionate first blush. And Sally Hawkins certainly displays a depth of feeling that a screen Anne Elliott hasn't shown before, even if she can't quite sell the prelude to a kiss that asks her to slowly creep her face closer to Wentworth, millimeter by millimeter for literally 30 seconds.

Persuasion is not my favorite Austen novel (in fact, it's my second least favorite behind Mansfield Park), and none of its adaptations have been my favorites either, but this was a perfectly adequate film with which I'm quite happy to close off the biggest leg of this marathon.

TL;DR: Persuasion is certainly the best adaptation of Jane Austen's final novel, but that's not a high bar to clear.
Rating: 6/10
Word Count: 796
Other Films Based on Persuasion
Persuasion (Michell, 1995)
Bridget Jones: The Edge of Reason (Kidron, 2004)
Persuasion (Shergold, 2007)

Also sprach Brennan at 8:57 AM