Reviewing Jane: That Is His Notion Of Christian Forgiveness 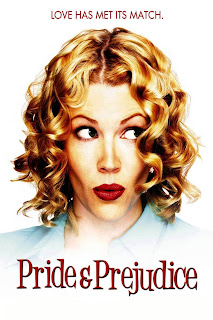 The run of Mormon Jane Austen adaptations had less juice in it than the run of Bollywood adaptations, but the sheer amount of money in the latter industry might have more to do with it than anything. But gosh darnit, those Mormons (who quietly pumped out Scents and Sensibility, which we recently covered) won't seem to let our girl go, and our topic today is their first outing: Pride & Prejudice: A Latter-Day Comedy. The thing is, if I didn't have my qualms about letting box office money get into the hands of a religion that systematically treats LGBTQ people like dirt, I'd say let them have it. The adaptations might be toothless and banal, but so are the endless slurry of Hallmark movies based on Austen's novels, and these are a damn sight better than those, pound for pound. This movie even has the slightest idea that people of color exist, which Hallmark hasn't quite figured out yet. 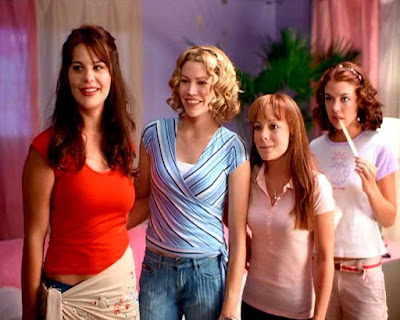 "Colorism" they've certainly heard of though, considering that the woman on the left is their entire Latinx representation.

Pride & Prejudice transplants the classic tale into modern day Utah, and unlike every other modernization of the story, all five Bennet sisters are major characters. They're not all related in this version, but they at least live together and are all constant agents of the story. Obviously our focus is Elizabeth Bennett (Kam Heskin), a BYU student with dreams of being a big writer who enters an intially tense flirtation with handsome British snob Will Darcy (Orlando Seale), but we also get some Jane (Lucila Solá), an Argentinian with an open heart who falls for handsome lunkhead Charlie Bingley (Ben Gourley); Lydia (Kelly Stables), a boy-crazy, spoiled girl whose rich parents let her think she's the landlord for everyone else; Kitty (Amber Hamilton Russo), Lydia's younger sister who is Joey Tribbiani dumb; and Mary (Rainy Kerwin), a painfully nerdy bookish girl who has terrible luck with men.

Elizabeth's happy ending with Darcy meets roadblocks in the form of another potential interest, the persistent but charming Jack Wickham (Henry Maguire), and Bingley's snooty and capricious sister Caroline (Kara Holden), who has her own designs on Darcy.

Also in the way is Elizabeth's pride, which won't let her believe that her manuscript needs work.

Much like Scents and Sensibility, this film does a lot of work to hide its Mormon origins (in fact, the Latter-Day Comedy subtitle is only used in very specific markets), but there is just enough sprinkled in there for the eagle-eyed viewer to catch the dogwhistles. Again if not for my severe, genuine problems with the organized church of Mormonism, one could imagine this film being even better if it had more references other than a more particular focus on church than other adaptations. Having the story take place in this particular milieu gives it a unique texture that helps it stand out, and if there's a better fit for Austen's chaste romancing in modern America than the Mormon community, I haven't seen it (nor would I wish to).

And you know I love a modernization that actually seems aware of the characters and motions that make the original narrative click, because if I see one more adaptation of this novel that boils it down to "woman fixes a grumpy man," I will have no recourse but to write a strongly worded letter to Colin Firth. The movie even sees fit to use title cards with Austen quotes that highlight the main point of that chapter of the film (the ones that quote such lines of Pride and Prejudice as "One week later..." are a dire insult, however). These cards, all presented in pretty colors, also highlight the quite lovely production design of the movie, which is all rosy tones and smeared floor-to-ceiling pastels. 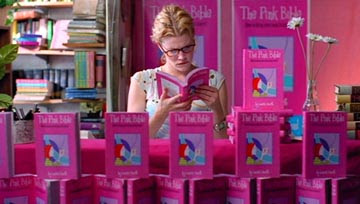 It's the Suspiria of Austen adaptations.

And that's as far as I can reasonably go with praising the movie. These Mormon adaptations never for a second flutter below a 5/10 (where the acting usually resides, especially in the case of Gourley and Russo), but they have a hard quality ceiling at 6/10. They are excruciatingly charming and pleasant, but fail to actually rouse themselves to become good.

It certainly makes an effort, with stylistic fillips every now and again involving fantasies produced by Elizabeth's fanciful imagination (which makes me think the producers of this film noticed that that Scrubs show was probably going places), but it's too fearful of being challenging to rise in the ranks.

And frankly, for the very same reason, the comedy here sucks on ice. It's altogether too cartoonish and wacky, proudly repeating and repeating and repeating gags like "Bingley has a failed business venture about making classical music CDs for dogs." The only moment that got a genuine belly laugh from me is a very strange scene where the music cuts off at a party and Mary tries to tide everyone over by singing "My Bonnie Lies Over the Ocean" poorly. Someone offscreen in the crowd shouts out "You suck! And therefore this party sucks!" which is so absurdly articulate and random that it tickled me. I'm not sure what they were going for there, but it sure worked for me.

At the end of the day, I'm never going to rewatch any of these Mormon adaptations anymore than I will the Hallmark adaptations, but at least both of these films had me in a pleasant reverie the entire time rather than questioning every life choice I've ever made.