Reviewing Jane: I Come Here With No Expectations 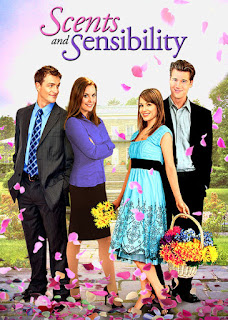 It seems like all the most popular Jane Austen titles have their own fallow period. Emma received three film adaptations between July 1995 and November 1996 alone. And while Pride and Prejudice has been pumping out nonstop reimaginings since the success of the BBC miniseries, that title hit that same number of adaptations in just a five month span in 2018. Well, it seems like Sense and Sensibility's fertile patch came in 2011, when two adaptations hit shelves before the midpoint of the year. First came From Prada to Nada, a Latinx spin on the classic story, followed swiftly by today's subject: Scents and Sensibility, which while not specifically a Mormon adaptation did come to us thanks to Mormon money. 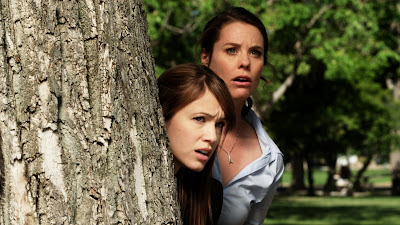 White people just couldn't bear letting it out of their hands for more than a season.

In Scents and Sensibility, socialite sisters Elinor (Ashley Williams) and Marianne Dashwood (Marla Sokoloff) are brought to their financial knees when their father is arrested for embezzling. Their mother instantly leaves the house to get a job with their aunt, taking their younger sister Margaret (Danielle C. Ryan) with them. In this adaptation, Margaret is a sickly child suffering from Movie Disease where she is perfectly energetic and capable of doing whatever she wants except she's a little pale and apparently at death's door unless she gets her Medicine, which is very expensive and only talked about when the screenwriter remembers it.

Marianne, an English major and amateur lotion-maker, gets a job as a copy clerk at a Business Firm, where she begins a flirtation with handsome Senior Executive of Business, Brandon (Nick Zano). Elinor finds her work experience at Dashwood Enterprises (or was it Dashwood Investments? Who could care, we never find out what they do) suddenly a stain to her name and the only job she can get is as a custodian at a spa run by the capricious and cruel Fran Farris (JJ Neward). However, her lawyer brother Edward (Brad Johnson) takes a liking to her. When customers at the spa get wind of Marianne's new lotion recipe, which make one woman's feet feel like they did "when I was 20 years old," they might just get a foothold back into making the money they need if Fran and her duplicitous employee Lucy (Jaclyn Hales) don't get in the way. 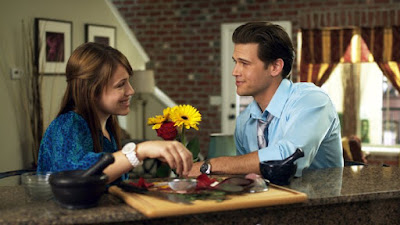 Also is love with the pair of handsome white man in the cards? Yes? What a shock!

One thing that helped this particular adaptation stand out from its contemporaries (I'm including the Hilary and Haylie Duff modernization Material Girls from five years before in this assessment) was that it (mostly) used the actual names from the novel for its characters, showing that it had a bit more interest in actually representing the material from the novel. Not that Austen's heroines were trying to break into the lotion business, but the world is littered with enough faithless adaptations that I'll take what I can get.

The plot gets away from itself by the end, and the relationship with Brandon really has no relation to any element of the novel (though we are gladly spared the huge age gap this time), but beyond that it does its best to actually dress the core of the novel in modern clothes, which I really appreciate. It doesn't succeed at much more than the bare minimum, but I've come to learn that expecting even the bare minimum from something like this is to seal your doom.

Scents and Sensibility is at least entirely watchable and enjoyable the entire way through, even if it doesn't push itself beyond that for a single millisecond. There are no laughs, no tears, no romantic swoons to be had, but it's mildly charming in its banal plainness. It's the kind of movie you put on when you need white noise to hide the sound of you and your partner furiously necking on the couch. 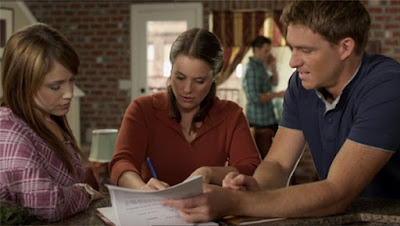 A use which the Mormon producers almost certainly did not intend.

The cast is game to provide exactly the amount of nothing that the film asks for. Ashley Williams is probably the standout, a tireless workhorse never being less than appealing and sweet during every second she's onscreen. She's an uncrackable Formica countertop of charm, and while her resolute positivity prevents the stakes from wrenching any sort of drama from the material, she capably tempers Brad Johnson's maniacally cheerful Edward.

Come to think of it, maybe the ultimate appeal of Scents and Sensibility is in fact how ruthlessly generic it is. If you're looking to be challenged exactly zero times by a motion picture, you've come to the right place. And its goofy approach to anything resembling a real world enterprise (business, medicine, patent law, lotion making) by taking pains to be as nonspecific as possible is quite endearing. I think I finally get why straight people have the impression that Mormons can be so charming. This film is toothless, jovial, and completely unwilling to leave you with a single unpleasant thought.

That's not the instinct that leads to great cinema, but Scents and Sensibility didn't have to be great cinema for me to enjoy it. It just had to be better than Material Girls and From Prada to Nada, which is a low bar indeed.