Reviewing Jane: Some Work In Which The Greatest Powers Of The Mind Are Displayed 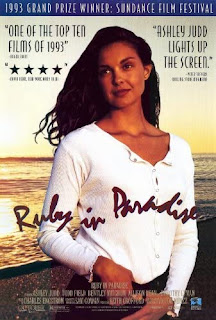 Ruby in Paradise came two years too early. If it had been released in 1995 or later, the fact that it's loosely inspired by Jane Austen's Northanger Abbey would have been front and center in all the press materials. Of course, it then would have had to compete with the banner year that brought us the Pride and Prejudice miniseries, Sense and Sensibility, Clueless, and Persuasion, thus launching Austen back into the media stratosphere.

But maybe this would have pressured it to be a little more Austen-y. It is obviously under no obligation to be so, given that most movies aren't made specifically for the purpose of fitting perfectly into a blogger's marathon 27 years later. But I must say I'm frustrated to be writing a review of a leisurely character drama (gross) and not an actual bona fide Jane Austen movie. Oh well, it's not like I'm in a drought of those. 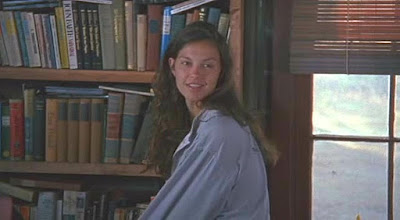 Pictured: The scripts for every Jane Austen project in the late 90's.

Ruby in Paradise tells the tale of Ruby Lee Gissing (Ashley Judd in her first major film role), a young woman who leaves Tennessee after the death of her mother and takes up residence in an off-season Florida beach town. While urban decay and stagnation surround her, she finds a job, finds friends, finds a man, loses some of those things, and in general tries to find herself. 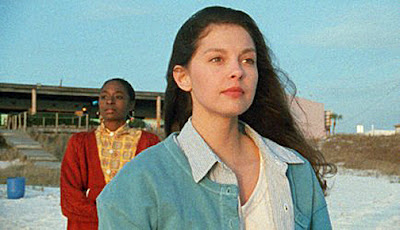 Let's wrap up this Jane Austen shit right off the bat. As much as writer-director-editor Victor Nunez claims this inspiration, frankly I don't see it. There is an assortment of women and an assortment of men that Austen scholars have feebly tried to map onto the characters of Northanger, but it's a wasted effort. There is an extended sequence where Ruby picks a book out of the library of her lover Mike (Todd Field, who would go on to earn three Oscar nominations by directing Little Children in 2006) and that book so happens to be Northanger Abbey.

They do dwell on the book for longer than an average movie would (before moving on to quoting Emily Dickinson a whole bunch, and I wonder why they didn't claim this movie was based on her writing as well), but the biggest connection they make is that Catherine Morland is an unlikely heroine who doesn't come from means. Ruby goes "wow, just like me," completely ignoring that Catherine is also an utter fool who is frightened by a pile of receipts in the bottom of a wardrobe. It reeks of somebody striving for respectability but turning in a book report after reading only one sentence of the novel.

And boy, does Ruby in Paradise strive for respectability. I am shocked to learn that the film is not Victor Nunez's first directorial effort, because it reeks of a young scab fresh out of film school shoving all his big, deep philosophical ideas into one laconic screenplay. It does have a mature assuredness about the way it presents these ideas, where it's not in any rush to get anyplace, but the overused voiceover explaining all the themes of the movie is exhausting. 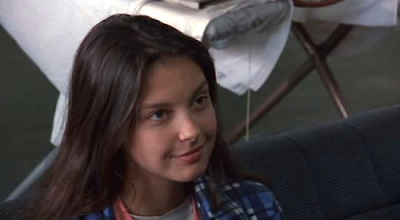 Dear Diary, all my thoughts are very Deep and Important.

Ruby in Paradise has another huge liability in the form of Mike, who thankfully isn't treated as some sort of great, world-defining love affair, but is still beyond irritating to spend time with. He's like Ryan Gosling in La La Land learned about negging, constantly exerting his superiority over the few comforts and enjoyments that Ruby has. I'm especially irritated by a scene where he forces her to watch shitty religious programming on TV, saying "I watched your crap, now you can watch mine." He didn't watch her crap. He complained loudly during a movie she took him to, then made her leave halfway through because he's a big drama queen. That's not putting in effort, Mike! You don't get brownie points! Also the sound effects of the unseen film they're watching feature both swords clashing and laser blasts, so frankly it's probably a 10 out of 10.

Maybe the movie is successful because I also felt like I went on a shitty date with Mike. But I feel like the screenplay is too willing to forgive him. Just because he's not assaulting her like her other shitty boyfriend doesn't mean they're automatically a good match.

But I digress. The visuals of the movie are strong. A particular standout for me is the opening credit sequence, a road trip presented as a view of the road behind the car, rather than in front. I feel like this is an excellent way to put a visual button on the way this movie chooses to be reflective and introspective rather than rushing forward into the vast expanse of narrative possibility. There's also a much more obvious metaphor of a bridge that was half torn down, leading to nowhere. We get it, Victor. But it's still well shot!

And then there's the reason anybody gave a shit about this movie in the first place (including Roger Ebert, who put it in his Top Ten for the year): Ashley Judd. She gives a terrific, measured performance that is all subtle interplay and reactions. Her one big dramatic scene is similarly held back, completely lacking in the self-indulgence that riddles the screenplay. You're compelled by the way a smile lightly plays across her lips, almost threatening to break her facade, or how hard you can see her trying to keep her composure in a moment of great torment.

I can't say I previously had any fondness for Judd (I couldn't name a single one of her films), but she blew me away here. Her performance alone is reason enough to seek out the movie, but for the Jane Austen completists out there, don't waste your time. This is a completely different, albeit good, experience than the one you're looking for.