Reviewing Jane: I Found Myself, By Insensible Degrees, Sincerely Fond Of Her 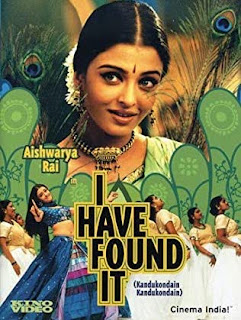 Now I wouldn't exactly say I am the most qualified critic to be reviewing Bollywood cinema, even though I spent the better part of this year familiarizing myself with the form before reviewing Aisha (I did this for fun, not for Aisha, but it's a happy coincidence nonetheless). But I am DEFINITELY not the most qualified critic to be reviewing Kollywood, the Indian Tamil-language cinema out of Kodambakkam. Although this particular entry, a Tamil adaptation of Sense and Sensibility titled Kandukondain Kandukondain (I Have Found It), shares a lot of its DNA with the Bollywood films I have seen, there is a distinct dreamlike quality to the film that I will dive into in greater detail. I can't say for sure whether this is an aspect unique to Kandukondain Kandukondain or Tamil cinema in general, though I do hope I have further opportunity to educate myself on that.


I'm just saying, I will be approaching this review specifically as a Jane Austen adaptation rather than as a piece of Tamil cinema. I am completely ready to weather any criticism of me misunderstanding what it means to be the latter. 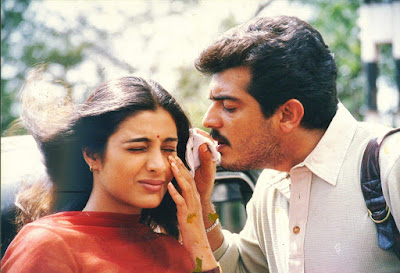 You should ALWAYS take any movie review with a grain of salt, but I'm just saying that in terms of personal experience you should perhaps trust my judgment on, say, 80's slashers, more than Indian musical romantic comedies, though both have given me great joy in my time.

The sensible Sowmya (Tabu) and the passionate Meenakshi (Aishwarya Rai, who also starred in the Bollywood-style Bride & Prejudice in 2004, so I guess she found herself a niche) are two sisters in a palatial Indian estate whose mother is constantly trying to marry off. Sowmya worries that the gossip about her being unlucky might turn out to be true, because her first fiance committed suicide after an affair in America, and her new lover Manohar (Ajith Kumar) has refused to get married until he finishes his first film, which is beset with problems. Meenakshi, on the other hand, is aware that wounded veteran Bala (Mammootty) is hopelessly in love with her, but she spurns the older man in favor of the dashing banker Srikanth (Abbas), though she is unaware that his constant poetry-quoting and sweet nothings are partially an attempt to distract her from the fact business is on the brink of ruin.

When their grandfather dies, leaving the estate to a capricious uncle and his wife, who kick out the family, they must start from scratch. Sowmya finds menial work at a software company despite her great computer skills, and Bala helps Meenakshi get a job at a music college. 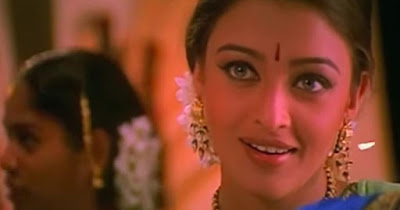 Because one of her great talents, aside from crying, is singing.

What's truly remarkable about Kandukondain Kandukondain is that, despite the requisite 2 and a half hour run time, the plot moves at a blistering clip. Especially when it comes to the heaving drama of Meenakshi's storyline (which tracks, because she's the resident Marianne), hardly a minute goes by where she's not stumbling into some new disastrous predicament or other. Some of this might have to do with the interesting choice to rearrange the order of events from the novel, not plunging the sisters into poverty until about halfway through rather than at the very beginning. We get to spend time with their romantic travails before their sink into ruin and watch how those dynamics shift afterward as well.

Despite playing it fast and loose with the chronology, this is actually the modernization of the material that captures the flow of the novel best, actually realizing every major moment of the romantic arcs rather than just paying lip service to "rich sisters are poor now, whoops." Perhaps one other reason the plot appears to move so quickly is the fact that it needs to squeeze itself between the extended musical numbers. This is hardly unusual from the Bollywood movies that I've seen, but Kandukondain Kandukondain has an even more fixed devotion to unreality. Although the Bollywood musical numbers I've seen could hardly give a rat's ass about things like visual geography or narrative realism (to their credit, I might add), Kandukondain Kandukondain does them one better by having its numbers take place in what I would almost describe as a dream space, transporting its characters to new locations entirely, ones that we've never seen before and never will again, rather than having song and dance break out in the general setting in which the film takes place.

It's like a series of music videos keep breaking into the movie and running away with the characters. Some of these videos are Salvador Dalí nightmares (Meenakshi's first solo song sees her accompanied by backup dancers in a series of increasingly surreal costumes, including blue and black body paint, elephant heads, and big flat masks of the same turbaned man), some of them are gothic romance (including a dream ballet in a crumbling castle), some are classic Hollywood (one takes place on a giant film set of a boat, even though the movie Manohar is making is about a train) and some are... on train tracks in front of the Sphinx? They average out at about six minutes long apiece, and they pepper the film with a surreal quality that is compounded by how many opportunities there are to have musical numbers in a 150-minute film.

I don't think I disliked it at all. In fact, I might have loved it. But I certainly don't fully understand it. It's languorous and weird, and not given clarity by the film's tendency to transition between completely unrelated scenes introduced by characters we've never met with reckless abandon, but the music is generally pleasant and while the dancing is not particularly inspired, especially by the standards of what I have seen come out of Indian choreographers, it's certainly an inimitable experience.

Look, I've seen a loooot of movies. If you give me something I haven't seen before, that counts for a lot. Even if it's... whatever this is.

Even though the storytelling frequently leaves me flummoxed, the visual eye that brings the musical numbers together is clearly at play during the dialogue scenes as well. There's a beautiful, heart-rending sequence at the grandfather's funeral that fades to the workers cleaning his funeral petals off the floor in an empty ballroom, and the camera sometimes launches into wild positions to match the mood of the scene, capturing lonely anguish from an isolating bird's eye view or diving deep beneath the water when you least expect it.

Kandukondain Kandukondain also hits the mark by once again showing that Jane Austen's works, despite the tutting of certain pretentious folks who take her work altogether too seriously (this coming from a guy who's reviewed 26 movies based on her novels), are hilarious romantic comedies. The film embraces that spirit with moments like the wacky Hollywood satire on Manohar's film set, a romantic moment involving Sowmya being hit in the eye with a piece of paper, or a scene of mistaken identity that provides a cringe-inducing spot of mirth.

Altogether there is a lot to like, and perhaps even love, about Kandukondain Kandukondain. I certainly have my doubts about lifting it into the rafters as a minted classic Austen adaptation (once again, the age difference between the Colonel Brandon and Marianne characters doesn't translate too too far past the 1800's), but as a detour into an avenue of cinema I didn't even know existed until turning it on, it was certainly a delight.