Reviewing Jane: I Sincerely Hope Your Christmas May Abound In The Gaieties Which The Season Generally Brings… 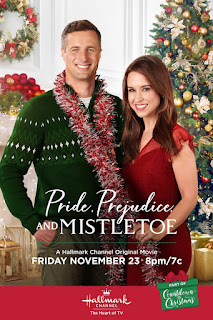 Merry Christmas Eve, everyone! Its continues to be that very special time of year when Hallmark's endless shitty Jane Austen adaptations collide with Hallmark's even more endless shitty Christmas movies! This one is also based on Pride and Prejudice because it's the only novel anybody at the network or in the audience has ever read, apparently. 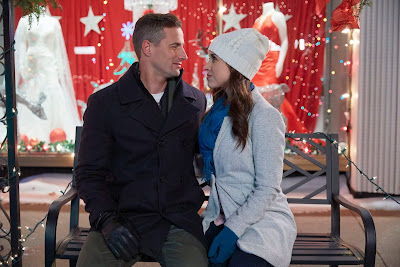 Also, I hope you like this hat, because you're going to be seeing a lot more of it.

I sure hope you weren't using this movie as an excuse not to do your reading for senior year English, because this movie is about as based on Pride and Prejudice as a Three Musketeers bar. Essentially the only elements salvaged from the wreckage of Austen's masterpiece are the character names and... yeah, no, that's it. In a saucy twist, our lead is Darcy Fitzwilliam (Lacey Chabert, a girl!), a high stakes stock market person in New York. She has been so hardened by her big city lifestyle that when she offers to open an investment portfolio for the guy who runs the coffee cart on the sidewalk even though he only has like five cents that she insists she pay for the coffee he offers her for free. Cruel witch! Oh, and she has a big client named Mark Spencer (Paulino Nunes), which is not an Austen name, but it is a British department store so shoutout to screenwriter Nina Weinman having herself some fun.

Anyway, she returns to her hometown of Pemberley, Ohio the week before Christmas to help her mom (Sherry Miller) plan the annual Pemberly League Holiday Auction. It turns out that the caterer her mom just hired is none other than her high school debate rival Luke Bennett (Brendan Penny), and they're going to be working very closely together over the next couple days. They instantly ruffle each other's feathers (She is nice and he is kind! They're too different, it will never work!), but eventually they fall in love or whatever. Shocking. Also the only person of color with a major role is Darcy's work partner Austin (Robinne Fanfair, and what a terrific name that is), a conniving jerk who wants to shove her out in the cold while she's on vacation.

Little does she know, out in the cold is exactly where Darcy needs to be right about now.

Well, this movie certainly is a Hallmark movie. It opens jingle bells a-blazing over a city skyline, the lead must move from the city to a small town and never return, and all flat surfaces in the background have every square inch cross-hatched with Christmas lights and tinsel. There's literally a shot reverse-shot conversation in a single small office and there's a fully decked-out Christmas tree in the background of both shots. That's two discrete trees in two discrete corners of one office large enough to fit one person. God, I love Christmas movies.

Hallmark is so nervous about ruining your holiday cheer that they carefully avoid any conflict more potent than a light breeze. There's a love triangle so empty I literally didn't even include the second dude in my plot synopsis, and beyond that it's just about two overly nice people in a town full of sickeningly nice people slowly realizing they're meant to be together.

For all the sweet this movie has to offer, there is a bit of tartness present that I'm highly pleased about. Sherry Miller swoops about this film like a grand dame, giving a "curt older woman" performance that Aunt Violet in Marrying Mr. Darcy could only aspire to in her wildest Xanax daydreams. There's a blissfully camp conversation she has with Darcy where she goes from informing her that the Christmas tree designer has cancelled to making grand accusations about her business acumen in three seconds flat. And whether it be that Luke's turkey pot pie (gross) is the "best meal she's ever had" or that she'll never stop by that store again, every choice she makes is final. her snappy one-liners are full of piss and vinegar and she is a true delight whenever she tromps onscreen. 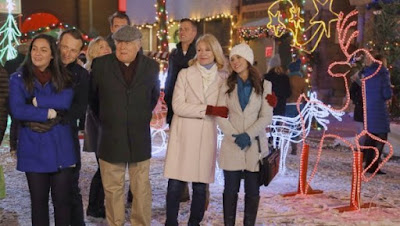 There's my angel, second from the right. (This is the only promotional photo I could find that wasn't Lacey Chabert and Brendan Penny making moon eyes at each other.)

Beyond that, what more could there possibly be to say? This is a Hallmark movie! The script is full of delightful snippets of dialogue want to appeal to octogenarians (Luke compares the gossip in a small town to "the Information Superhighway"), Darcy is obsessed with roasted chestnuts with a force no human being has ever been able to muster in human history, and the ways they paper over the gaping plot holes are hilarious and sometimes even illegal (they force a children's choir to be the waitstaff at the event when the catering company falls through at the last minute).

It's like settling into a delightful warm bath of Christmas-flavored camp. You know exactly where every scene is going so there's no need to worry, and it's never going to descend to the level of true crap because you're in the capable hands of Lacey Chabert. She's not terrific, but the movie isn't asking her to be. She's just one cog in the giant Hallmark machine, but she makes it seem like she's having a great time doing it all. And that's no small feat considering she's already been in half a dozen of these Hallmark movies (and that's just counting the Christmas-themed ones). It's all surface and no substance, but think of it like a Christmas ornament. It's completely empty on the inside, but it sure makes it feel like the season.