Reviewing Jane: It Was A Foolish Precipitation Last Christmas 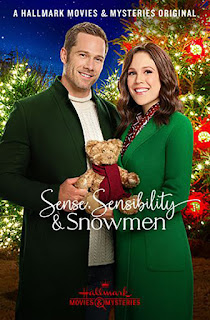 Merry Christmas, everyone! Its continues to be that very special time of year when Hallmark's endless shitty Jane Austen adaptations collide with Hallmark's even more endless shitty Christmas movies! And to cap off this special trilogy we have the pleasure of visiting a film directed by the man who previously brought us untold Austenian pleasures with Hallmark's dog show romance Unleashing Mr. Darcy. It's Sense, Sensibility, and Snowmen, the only one of the five Hallmark Austen movies not to be based on Pride and Prejudice! What a treat! 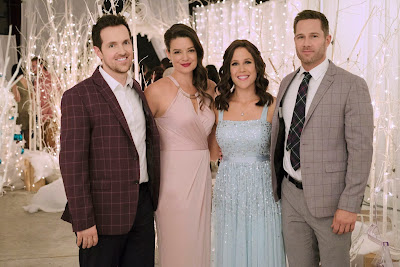 It's still brought to us by infinite white people, however.

OK, so it may not be based on Pride and Prejudice, but it's not based on any Sense and Sensibility I'VE ever read. Yes, we have the sisters Ella (Erin Krakow) and Marianne Dashwood (Kimberley Sustad) and their love interests Edward (Luke Macfarlane) and Brandon (Jason McKinnon). But in this one Ella is the flighty nymph ruled by her emotions, and Marianne is the one ruled by logic and sense, in an unmotivated switch that causes the novel's plot to crumble from underneath the film like the stone floor in an Indiana Jones adventure. Also Edward is not Ella's cousin (not complaining), but rather the cousin of Brandon, who is aged down by a good 15 years (maybe a little complaining on this one, because I'd love Hallmark to tackle a nontraditional couple and having gay people is obviously out of the question).

Also the story is now about party planning because of f**king course it is. Edward has taken over as CEO of his father's toy company, which is inexplicably called Ferris Wheel. He is being visited by French suppliers whose business will put the company in the black, but he needs to win them over with heart rather than statistics and numbers because apparently the French are terrible at business. Unfortunately, he is a cold corporate automaton, so he hires Ella (who is trying to prove to Marianne that she is capable of committing to their party planning business rather than run off to backpack across Europeor whatever for the millionth time) to plan a huge Christmas soiree for the company despite the fact that they've already had an awkward encounter where she mercilessly mocked him for having no Christmas spirit.

Will his business acumen allow her to grow into the sister Marianne needs to be? Will her free spirit allow him to loosen up, enjoy the holiday, and land the account? Will they fall in love along the way? Of course! This is a Hallmark movie! 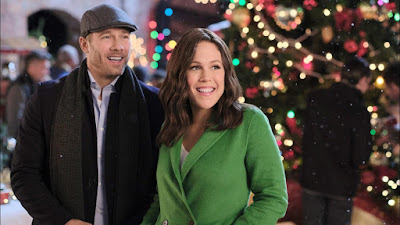 And this is the moment where we must tragically recognize that this movie IS in fact also just a Pride and Prejudice riff, because the only thing these movies remember about that novel is that the couple doesn't get along at first, which is palpably NOT the case in Sense and Sensibility. And this movie doesn't even remember to have the sisters start off rich and then lose all their assets which is the one nugget that modern adaptations absolutely must remember to retain. P&P is the couple at odds, S&S is the poor sisters. You don't even need to read the books to get that! But Hallmark has clearly read neither, so perhaps we're better off not getting too upset here and avoiding having this caption become longer than the review.

Honestly, after watching three of these movies in a row, it's hard to even muster the strength to identify any unique attributes it has. It's simultaneously exactly like all the other Hallmark movies, and yet comes off more deeply generic and tedious than any of them. The brief thrill of recognizing Austenian names coming from the mouths of characters gives way instantly to a cookie cutter Christmas movie. And no, I don't mean the 2014 Hallmark movie literally called A Cookie Cutter Christmas that also stars Erin Krakow. They really just keep lobbing me these softballs, it's almost embarrassing.

Literally the one thing that's exciting in any way to someone who has seen more than their fair share of these (a number I have long since surpassed) is the fact that the narrative takes place entirely within The City. Specifically Chicago, as played by Vancouver. Rather than The City representing a skyscrapered purgatory of corporate greed and soulless automatons that must be overcome by the heart and humanity of Small Town Living, it's just the setting for the movie. 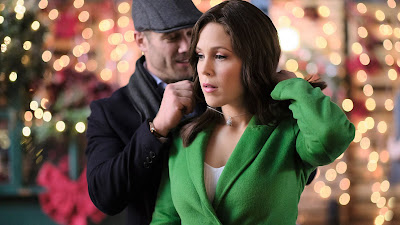 And I guess they try to get playful with the sheer lack of humanity that the character of Edward has (something that is constantly undercut by the goofy charisma of Luke Macfarlane, who is charming but wildly miscast). When he arrives at one of the many Christmas carnivals that are around every corner in the Hallmark Cinematic Universe, he can't understand why they're sipping hot chocolate and waiting for the Christmas Tree Lighting and asks "so, what's the objective?" He's not a fish out of water, he's a fish launched into the reaches of deep space.

He understands absolutely nothing about human social behavior, and it's a shame because he doesn't seem to understand anything about running a business either, which is the one thing he's supposedly focused his life on, at the expense of learning literally anything about the world. Hallmark movies don't typically have a strong grasp on the details of office culture other than Business Meeting, Report On My Desk By Monday, Spreadsheet, etc. But the wild gaps in logic here (Ella's warm spirit inspires Edward to use children for the first time in the focus groups of his toy company) are gaping chasms that the characters can't possibly climb their way out of. Edward's a lost cause, obviously (he also announces the contract with the French company at the holiday party before they even have anything in writing), but even Ella is kind of a mess. Her plans for expanding the company include, and I quote, "more staff, expanded marketing, and loans." I'm no Business Boy myself, but you might think that the best business plans would avoid one having to owe money to people.

But beyond picking apart their business acumen, the characters have almost nothing to offer in terms of entertainment. Marianne exists only to provide easily clearable conflict hurdles, rather than participate in the romance other than a background flirtation with Brandon. And speaking of Brandon, he's stripped of absolutely every element of his character on the page. He's not even been given the gift of a different character from the novel's personality like Ella, so he phases through the movie like a ghost, making absolutely no mark.

It's not unpleasant to watch at any time, but Sense, Sensibility, and Snowmen is completely comatose. If you're home with the flu and don't have the capacity to focus while slipping in and out of a fever haze, then this might be the perfect fit for your needs, but beyond that I'd recommend literally any other Hallmark Austen movie, and that's not something I say lightly, because most of them are quite dreadful.