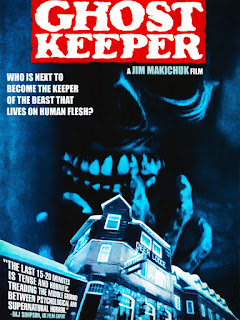 Holiday-themed movies are anything but uncommon in the 80's slasher genre. The only thing odd about encountering one set on New Year's Eve as we continue our journey through 1982 is the fact that the entire film isn't built around the holiday. In fact, I've never seen Ghostkeeper on any list of holiday slashers. Sure, it barely uses any tropes or signposts of the holiday beyond a couple mentions of the year to come, but that doesn't stop people from recognizing that same year's Humongous for taking place on Labor Day, something only mentioned in a title card. To find out why this movie isn't getting its name out there, let's dive in deeper, shall we? 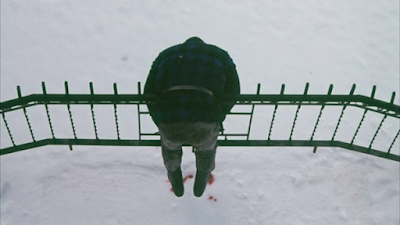 Ghostkeeper is not as lurid as the title might make it sound, but it's still a slasher that goes pretty damn far off model. For one thing, the potential body count is stymied by an incredibly small cast. Three city folk - Jenny (Riva Spier), whose only character trait is that her mother was institutionalized and she worries about her own mental health; Marty (Murray Ord), Jenny's boyfriend who is an unbelievably douchey prep; and Chrissy (Sheri McFadden), a sexed-up blonde who transparently wants to sleep with Marty - go off snowmobiling while bored on the morning of New Year's Eve. When the snow starts coming down hard, they hole up at Deer Lodge, an abandoned ski resort higher up in the mountains.

They think they're alone, but they soon meet an old woman credited only as Ghostkeeper (Georgie Collins), who spends a lot of time refusing to answer their questions in anything but gruff, elliptical vagaries. She also mentions she has a son hanging around her somewhere. Naturally, the young folks begin dying, but with such a small platter of meat, this takes a bit longer than usual. It begins to come to light (pretty much only because of a title card explaining it before the credits even roll) that this lodge is now the home of a windigo, described in this case as a "ghost who lives on human flesh." This doesn't really matter because the director ran out of money before being able to include pretty much anything actually with the windigo, who is depicted in the few shots he's in as a man with a bunch of dirt on his face. 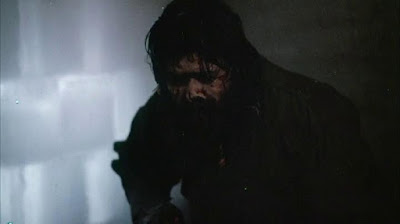 Ghostkeeper is an early 80's slasher hailing from Canada (which I could have told you even without looking it up, thanks to the copious "sore-y's," "eh's," and the presence of composer Paul Zaza), and that's usually a good sign. But there's a reason it ain't ending up on any Canadian slasher lists either: nobody wants to claim this movie for themselves.

The movie starts off by banking a whole bunch of goodwill. The chilly, snowbound atmosphere is a fun wintry blanket to wrap yourself up in, and the Deer Lodge is an excellent location. There's something deeply alluring about abandoned places, and the trio's exploration of empty restaurants and ballrooms is eerily enticing. If anything, this setting draws a straight line between the elegant chills of The Shining and the frigid slasher efficacy of Cold Prey.

Unfortunately, once the plot kicks in, Ghostkeeper almost immediately begins to squander all that goodwill. The slasher movie mainstay of having characters wander down dark hallways arrives in full force here, padding the time that should have been filled with more kills, then the time where there should have been a monster. Essentially, if there's a genre we can call "Hallway," Ghsotkeeper fits into that way more than it does "Horror." 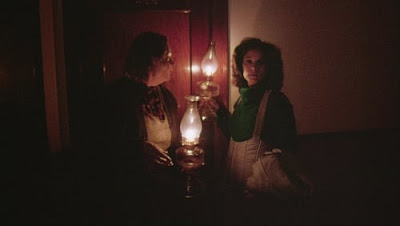 It's a shame, because there are some solid elements floating around in the primordial ooze that could be creepy if they were implemented properly. For a film so cheap and so devoted to not actually killing anybody, there are some really decent gore effects. They don't push the envelope in any way, but they're rendered with more realism than one might reasonably expect from a C-picture like this. And I do want to commend the work of Georgie Collins, whose hoarse whisper and erratic physical performance craft a character who is uncanny and exhilarating to be around.

Unfortunately, her screen time is relatively small, and the other characters are wallpaper when they're not being exquisitely irritating. Jenny's constant monologuing about her vague sub-Hereditary backstory fail to crack onto any sort of pathos, Chrissy is shallow and vapid, and Marty is perhaps the most casually cruel individual to ever walk the earth. It's a curiosity why any woman would be interested in anything about him other than his jawline. He mercilessly mocks any living being he finds himself in close contact with, and has two moments alone with Jenny where he behaves almost like a mad dictator.

Ghostkeeper is a profoundly empty movie, a fact that's made even more painful by the way it squanders an excellent setting and a promising villain. It's far from the worst slasher I've watched for this project. It's not even the worst slasher of the summer of '82. But I can't think of any reason to recommend it to anybody at any time. Maybe if you're a completist of the smallish sub-subgenre of New Year's Horror, but I'm afraid if that's the case, you're even more far gone than Yours Truly.

Killer: Ghostkeeper (Georgie Collins), her son, and oddly not the Windigo
Final Girl: Jenny (Riva Spier)
Best Kill: Chrissy is drowned in the bathtub, but when the movie cuts back to her she's still alive for some reason so her throat is slashed, in a pretty solid effect.
Sign of the Times: The waist of Jenny's pants might literally be high enough to cover her nipples.
Scariest Moment: During a fireside hangout, Marty begins to sing a horribly racist parody of the Mexican song "Cielito Lindo," which is a pretty deep thing to know if you're gonna be a bigot.
Weirdest Moment: After Jenny kills the Ghostkeeper's son, Marty goes completely mad and rubs grease all over his face, babbling incoherently.
Champion Dialogue: "I should learn never to go places with geological engineers."
Body Count: 6; 2 by the son, 1 by the mother, 2 by Jenny, and 1 by an act of nature.
TL;DR: Ghostkeeper starts off strong, but deflates slowly across its tedious run time.
Rating: 3/10
Word Count: 1114
Also sprach Brennan at 9:45 AM