Tears For Fears: The Lonely Road 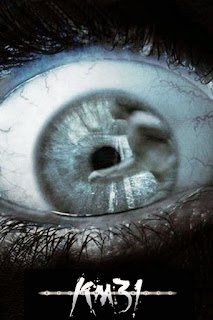 We're going to be spending quite a bit of time with La Llorona in the 2000's, but the interesting thing is that so far, no two films have matched. We've gotten a family melodrama and a cabin-in-the-woods slasher so far, and many more interpretations are coming down the pike. To further prove the flexibility of the Llorona legend, here we have KM 31. It is many things, but first and foremost it's a modernization of the character as a roadside urban legend. 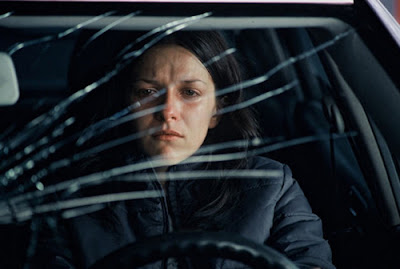 I know cars don't seem especially modern, but this legend is oooooold,, my friend.

KM 31 takes place on and around the 31st kilometer of a highway spanning the Desierto de los Leones. When driving up to visit her twin sister Catalina (Iliana Fox), Agatá (Iliana Fox) runs over a young boy whose body vanishes seconds before she's hit by a truck and left in a deep coma. Catalina teams up with her Spaniard friend Nuño (Adrià Collado) who is obviously totally smitten with her, and her sister's boyfriend Omar (Raúl Méndez) to find out what happened. Over the course of a twisted psychosexual love triangle and a lot of ghostly shenanigans, they trace a series of mysterious accidents to the source, La Llorona, the ghost of her drowned son, and their dominion over the river that runs underneath the highway. 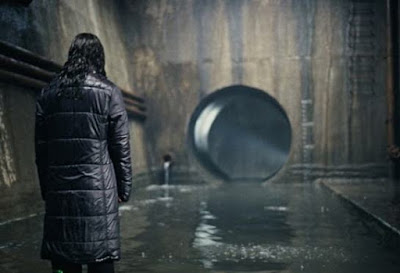 Being from L.A., I was shocked that the river hadn't just dried up and become a road, because that's pretty much how it goes over here.

The first thing that comes to mind about the film is that it's fabulously luscious when it comes to visuals. Director Rigoberto Castañeda and cinematographer Alejandro Martínez work together to create a slick and gorgeous environment, with a camera that glides with ethereal ease through every space. They splash the landscape with cool blues and mysterious shadows that actually create atmosphere rather than blocking out your ability to see anything like some movies I could mention.

It's pretty obvious why they're doing this: The Ring was a huge hit in 2002, and they're doing everything they can to imitate what Gore Verbinski was doing there. But it's a good look to want to steal, and they steal it well. And that's not where the J-horror influences end, nosireebob. The ghostly boy that takes the place of La Llorona in many scare sequences is straight from The Grudge, and the entire storytelling style is in general very Eastern. To the point that the third act makes hardly a lick of sense, but that pretty much comes with the territory with Japanese horror imports.

If somebody tells you they understood the ending of, say, Ringu 2, you've just met a liar.

KM 31 is a blend of cultures I could never have expected, but in execution it works quite well. It lends an air of spookiness and supernatural gravitas to the proceedings that La Llorona has lacked since at least 1960. The scare sequences are well-crafted (they work wonders with shadows and implication - the vague shape of a woman behind a curtain in the hospital is chilling), and the practical effects work is subtle but effective. I especially love a moment in the third act involving dozens of hands bursting from the water.

Unfortunately, the reveal of La Llorona herself involves some especially tragic 2006 CGI. It's dodgy and rigid in all the worst ways, and it completely deflates every ounce of tension the movie has built up over the course of a narrative that already has a tendency to meander a little more than you'd want.

While we're on the subject, Castañeda certainly has an eye for direction but his screenplay leaves a lot to be desired. It populates its tale with interesting characters with layered motivations and compelling conflicts both internal and external. All of whom are portrayed by capable, engaging (in some cases unspeakably attractive) actors. But it leaves most of its toys in the box, preferring to play with the "Catalina hears or sees something that isn't there" gag more than anything else.

Its character arcs show promise, but they're stunted by the need for them to be bent into a J-horror framework that values ghostly spectacle over well-drawn human beings. Thus, the movie leaves you with the feeling that it was enjoyable but thin, an impression that the invigorating aesthetic certainly doesn't deserve. This sort of waste is a cruel fate for a movie that has so much to offer, but I can't wish away its problems. KM 31 is solid, but it deserves to be so much more than merely enjoyable.