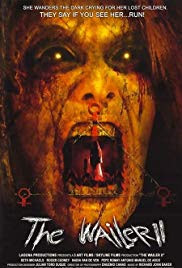 Well, here's a first for the Llorona marathon! A sequel! Look, it's no shock that a crappy direct-to-video horror movie got a sequel. Crappy direct-to-video sequels are the backbone of the genre. It's only surprising that it took this long to get one. We've been making these things since 1933, for crying out loud! Anyway, this is our first and it won't be our last, but we finally get to compare one of these films to a previous one that was actually made by the same production team with the same intent. Won't that be fun? 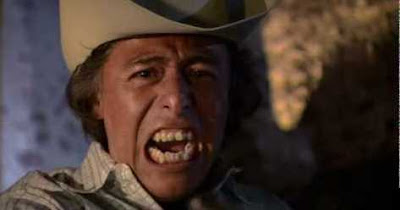 A word of warning: The screenshots are going to be exactly as low quality as the previous one. Already we're being consistent, wouldja look at that!

The Wailer 2 actually picks up exactly where the previous left off, with the lone survivor Julie (now played by Nadia van de Ven) now possessed by the spirit of La Llorona and wandering around the town of San Jacinto seducing and murdering random men she finds on the street. You know, typical behavior for the ghost of a woman who drowned her children. Julie's father Professor Tomas McBride (Roger Cudney) has come to Mexico to find her and follows this trail of bodies along with helpful cab driver and anthropology student Chava (Seth Michaels). 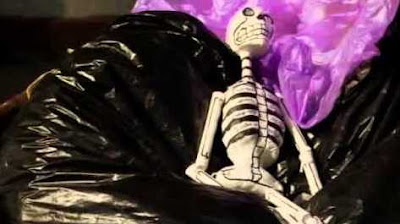 This is an actual screenshot from the scene where Tomas buys a handmade skeleton from a a kid at a street fair. The juxtaposition of death and a pile of garbage was just too strong a metaphor to ignore.

One thing I immediately noted when the movie began is that, somehow, it's better than the original. In the way that a slice of moldy bread is better than a slice of very moldy bread, but still. That's not nothing. For one thing, it's better shot. Shadows are used for more than just obscuring the actors' faces (were we trying to preserve their anonymity in the last one?), and more than a few times the camera does tricks (canted angles, backlit figures in fog, etc.) to increase the tension instead of just plunking itself down a few too many paces away from the action. The tricks director Paul Miller uses are the oldest tricks in the book, but at least he's read the book.

And while I'd hesitate to say that the acting is good, it's also a marked improvement. Roger Cudney seems to have been told he would be auditioning to play Liam Neeson's role in Taken, but his gravel-voiced intensity provides a consistent WTF factor that is engaging, and Seth Michaels is totally decent, alongside Antonio Manuel del Asco and Pepe Romay who play his uncle and his uncle's compadre (the two of whom receive a totally uncalled for emotional beat shoved into the middle of this movie, a surprisingly tender and moving scene that actually made the uncle's death have an impact - a first for this franchise).

Lastly, the kills are a massive improvement. Instead of smearing characters with strawberry preserves offscreen, we get a couple reasonably well-executed effects gags, including a drunk's head being ripped right the hell off his shoulders. 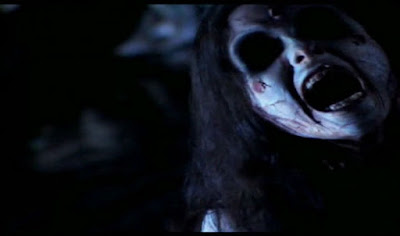 Unfortunately, even though this still uses a slasher format (just expanded to a city-in-panic subgenre instead of the classic cabin in the woods) The Wailer 2 has embraced tropes of the genre that are even more misogynistic and poisonous. For one thing, the hag/temptress dichotomy that La Llorona exploits in her kills is a hoary and unpleasant cliché. From The Shining to American Horror Story: Murder House to a million other titles, a scene of a sexy young vixen suddenly transforming into an aged crone has been done to death, constantly reinforcing negative stereotypes about female aging, manipulation, and fears of women expressing their sexuality.

On top of that, the film literally objectifies Julie as a vessel to be filled up by La Llorona and nothing else. The screenwriters couldn't care less about her as a character or a survivor of trauma. [Spoilers] As soon as La Llorona is exorcised from her, she is shunted bodily offscreen so the surviving men can complete their character arcs. It's a horrible habit for a horror franchise to fall into, and it doesn't do much to make an already mediocre film more watchable.

You see, even though it's incontestably an improvement on the first entry, it's still not a particularly fun time. The film moves too slowly through its plot, and a random scattering of pretty good deaths doesn't do much to give it enough energy to cross the finish line. Especially when the finish line is a third act that introduces a trio of old women out of nowhere for a bit of deus ex nun-ina who save the day for reasons that are totally unclear to me.

What I'm saying is don't watch this. I did, and I wasn't in active pain for any amount of time, but that's not really worth a recommend, is it?