Reviewing Jane: What A Shame, For I Dearly Love To Laugh 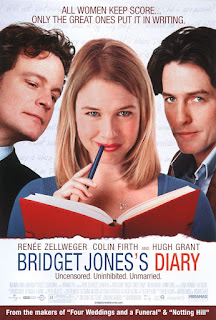 When I announced that I would be doing a marathon of films inspired by the works of Jane Austen, I had quite a few friends eagerly ask if Bridget Jones's Diary would be included. And of course it would be! The famous British rom-com, based on the bestseller by Helen Fielding, is notoriously a riff on Pride and Prejudice, because people who love Jane Austen still haven't read more than the one book apparently. I was excited to finally catch up with this film, which is one I had never seen until this point. But as we shall learn, apparently I was in the right to postpone it as long as possible. 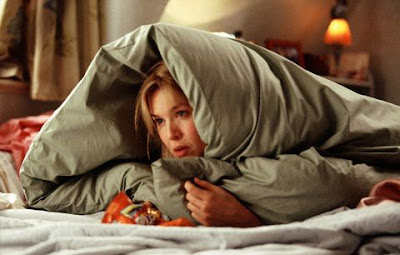 Pictured: Me, rightfully, hiding from this franchise.

In Bridget Jones's Diary, a thirtysomething "singleton" named Bridget Jones (Renée Zellweger, adopting a superbly flawed British accent) begins a diary for New Year's, documenting her efforts to lose weight, drink less, and find herself a man. While the diary is obvious an important framing conceit for the novel, it's more or less completely forgotten after a couple scenes, after two men almost instantly throw themselves at her. The first being her boss Daniel Cleaver (Hugh Grant, who also appeared in Sense and Sensibility), a charming rake who between this and Love, Actually is the king of British rom-coms about inappropriate office relationships.

The second man is a divorced lawyer, Mark Darcy (Colin Firth, and did you know he played another prominent Darcy? I don't remember in what, but it definitely rings a bell...) with whom she has a terrible first impression. And that's about it. The two men orbit her as she gets drunk repeatedly and makes a fool of herself, and eventually she ends up with one of them. 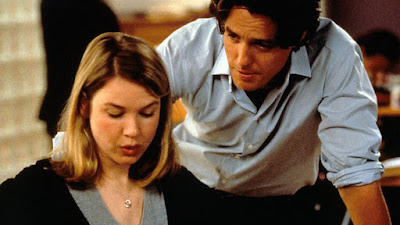 Because the love triangle between Wickham, Lizzy, and Darcy is TOTALLY the thing one thinks of first when one remembers Pride and Prejudice.

OK, first things first. Naming a character "Darcy" does not a Jane Austen movie make. There is no attempt at lining this story up with the original text beyond the idea that it's possible to fall in love with someone even if they don't seem particularly nice at first. It's an even lazier adaptation than Unleashing Mr. Darcy, and that was a Hallmark movie about dog shows, for shit's sake. No, much more than Jane Austen, this film reminds me of a text from a different titanic literary figure: Roger Ebert and his tome I Hated, Hated, Hated This Movie.

Sifting through the elements of Bridget Jones's Diary that make it a colossal irritant is a Herculean task, but let's throw a dart and pick an element at random. Like, say, the soundtrack, which at every turn makes the most immediately obvious choice like a Suicide Squad for the on-the-couch-with-Ben-and-Jerry's set. We begin with the requisite needle drop of "All by Myself," the anthem of single people in rom-coms, but "It's Raining Men," Aretha Franklin's "Respect," and two separate instances of "Ain't No Mountain High Enough" likewise flog subtlety to death. And then a scene with Bridget's mom is scored by "Me and Mrs. Jones" and you snap the DVD in half and throw it out the window.

This movie is marred at all levels by a complete lack of creativity. Plot beats so predictable you can convince your friends you're Nostradamus? Check. A character we're supposed to believe is "fat" and undesirable even though she weighs less than anybody you've seen all day? Check. A sexless and encouraging gay best friend (James Callis of Austenland, the only Austen connection this movie wasn't trying to milk for all it was worth, if only because the film hadn't been made yet)? Check. 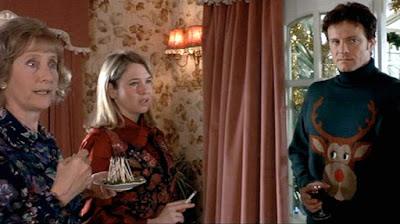 What was Colin Firth's motivation for being in this movie? Check.

Bridget Jones is dramatically inert, with the men in her life not so much causing conflict as jockeying into position at the random whims of the screenwriter, one after the other. It doesn't help that Grant and Firth are both coasting entirely on their established screen personas and not locking into anything actually compelling or interesting about their characters on paper. The single biggest moment of tension in the movie involves Darcy running out on Bridget after reading her diary, a moment of drama more forced and drummed-up than a Bachelor promo on ABC which deflates within seconds in service of a "romantic" explanation featuring behavior that no human being on Earth would consider appropriate.

But the real problem is that the film is also comedically inert. The two biggest joke setpieces involve the most ludicrous contrivances just as a launchpad for aimless jokes with flabby, cliché punchlines (the most egregious being a party where the women are meant to dress like tarts, only the theme changed at the last minute so Bridget is dressed very sexy at what is now a genteel garden party - somehow this is shocking to a group of people who were perfectly willing to dress like tarts to begin with, if only the theme hadn't changed). The "humor" otherwise leans on its R-rating to do the heavy-lifting, scattering pointless F-bombs in every direction.

And this is a comedy movie from 2001, so of course there are the obligatory casual racist jokes and weird sexual assault overtones. Hooray!

Maybe this could all have been salvaged if the protagonist was in any way worth rooting for. While Renée Zellweger does her best despite drowning in that accent (in fact, I think she must be the only reason anybody liked this movie in the first place), Bridget Jones isn't a relatable mess. She's an abhorrent prick who drinks like a fish, misreads every possible social cue and rule of decorum, spits out homophobic insults, and makes sure she's the victim in every situation, even if she's the one who orchestrated her own downfall.

This movie was a real trial to get through, is what I'm saying. The only redeeming quality I can think of is that there's one point where her diary entries are displayed on the neon signs in Piccadilly Circus, a clever visual cue that reminds one of just how flat and boring the rest of the movie looks. So no. Not a good time, my friends.