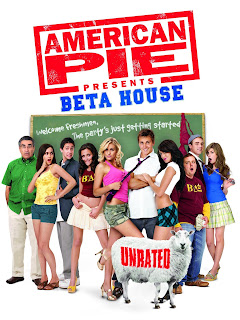 Yup, they kept making these and I'm gonna keep reviewing em. This is the circle of hell I have designed for myself. American Pie Presents: Beta House, which came just a year after The Naked Mile is the only one of the Pie spinoff movies to be a direct sequel, so at least there's that. And it's a sequel to the only film to show even a glimmer of potential, so I'm glad they recognized what they had for that oh so brief time. 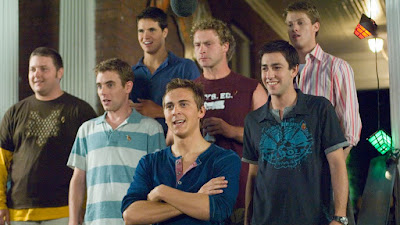 Plus, the intervening year at least gave everyone a chance to become just that much hotter.

So, here returns Erik Stifler (John White) and his friend Cooze (Jake Siegel), now at Generic College and ready to rush Beta, the frat run by Erik's cousin Dwight (Steve Talley), his right-hand-man Bull (Dan Petronijevic), and previously unseen party boy Wesley (Jonathan Keltz). We follow their romantic travails with a variety of sorority babes (Erik's girlfriend Tracy, around whom the entire previous film revolved, has dumped him unceremoniously offscreen), but meanwhile things start to heat up with a nerdy rival frat run by tech geek Edgar (Tyrone Savage), who want to see those dumb jocks kicked off campus. 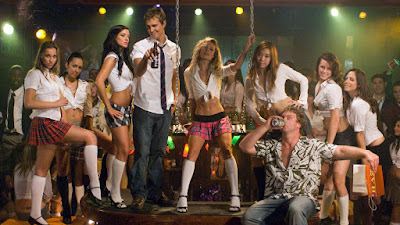 I can't say I blame them.

One thing Beta House benefits from is the fact that almost all the previous cast members have returned. I wouldn't say this is because any of them were particularly good, but we already have a relationship with these characters. Even if that relationship is "they didn't really make an impression on me," it's still easier to jump into this movie without having to meet a whole new slate of bland frat boys.

Of course, this being the same cast of characters also exposes us to their innumerable flaws. Beta House has a fearsomely long run of transphobic jokes to replace (most of) the jokes at the expense of little people that defined The Naked Mile, and there continues to be absolutely no reason that anybody should want to hang out with or engage in sexual congress with Dwight Stifler.

Unfortunately, beyond basic recognition of the people involved, the plot is radically un-engaging. The frat rivalry forms the central spine of the narrative, but the movie must have severe scoliosis, because that plot thread swerves out of reach in favor of a bunch of pointless romantic (read: "sexy") vignettes about all the boys and their raunchy escapades. When the plot finally kicks in with half an hour to go, it's not much better, using a frat Olympic games as an excuse to insert a chain of (admittedly decent) gross-out gags rather than gather actual narrative momentum. 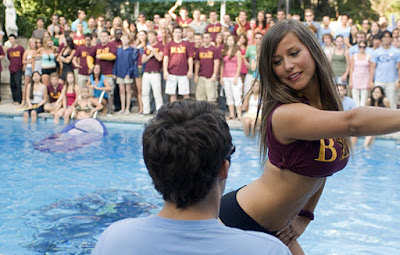 And I think I just liked the beautiful pool more than the challenges themselves.

The gags here were never going to be good, but most of them are built on foundations that make zero sense, and anybody with lived experience beyond high school graduation will instantly clock about a thousand tiny problems with the premise. Fortunately, that excludes the entire demographic of this movie's audience. But seriously, there is an entire scene about how easy it is to make a grown man ejaculate in his pants (spoiler alert: these men clearly have a medical problem), and also a lot of gags revolve around a co-ed bathroom, which just wouldn't happen. It's not a thing, I promise.

And Eugene Levy is really just in this movie, isn't he? I always expect him to show up for a scene and then peace out, but he keeps coming back again and again and again, in further degradation of his established character (apparently now he's a frat legend with a wild sexual history). To be fair, he certainly only spent maybe two days on set, but they really milk every second out of him that they can, and it just resolutely refuses to work.

Beta House is exactly in line with this entire franchise: just watchable enough to be a meaningless diversion, but not worth a single lick of your time. But on the bright side, there's only one of these left! Why am I doing this! Dear Lord, tell me why!