Tears For Fears: The Santo Clause

A caveat: This film is only available in Spanish with Spanish captions, so some slight nuance may have been lost. But it'll be much better than certain previous entries because I read the language much better than I can listen. 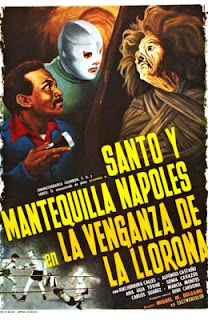 If you're not familiar with Santo, sit your ass down for a minute. A towering icon of Mexican culture, Santo was a luchador wrestler famous for never taking off his iconic silver mask. After achieving humongous success in the world of wrestling, he starred in over sixty movies using his wrestling prowess to defeat various evils, including zombies, vampires, "the Hotel of Death," and... La Llorona.   You can't just be a Mexican folk hero and not cross paths with La Llorona. 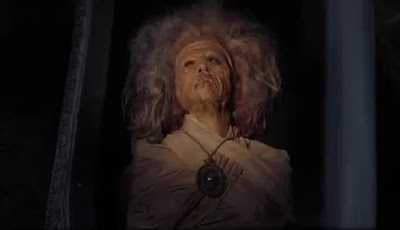 Which brings us to Santo y Mantequilla Nápoles en la Venganza de la Llorona (known in English as Vengeance of the Crying Woman, because people still haven't learned that translating "Llorona" is a lost cause). In the film, Santo (Santo) is a hero pure of heart. He is hired to dig up the tomb of Doña Eugenia Esparza (Kikis Herrera Calles), a spurned woman who murdered her own children and hid her lover's fortune away before taking her own life. Supposedly the tomb also contains a map to the treasure, but the people employing him assure him that they will use the money to support children's hospitals.

Not everyone is so scrupulous however, and Santo - along with his boxer friend Mantequilla (José Nápoles) - finds himself being crossed by the Mexican mafia, who want the money to themselves. Cue a whole bunch of wrestling, and the disturbance of the tomb releasing the ghost of Eugenia (now la Llorona) to go on a killing spree in town. Can Santo save the day? And, more importantly, will he do it without wearing an increasingly ludicrous array of 70's dad sweaters? 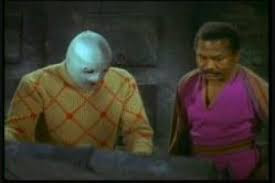 The dream of the 50's B-movie is alive and well with Santo, with all the pros and cons that might imply. And there are certainly cons, like the cave sequence where we get to watch multiple groups of people wander around in the dark for about five full minutes before anything actually happens. Or the fact that every twenty minutes or so the action screeches to a halt so either Santo or Mantequilla can sit in a family room and watch the other fight in a match on TV. And these matches, man... They're shot in a grey void, which no amount of piped-in crowd noise can convince me isn't just a soundstage in Mexico City.

But right there is where the crummy starts to blend with the sublime. Santo exists in that rarified B-movie air where every mistake or idiosyncrasy starts to add to its kooky power. Minus that hella boring cave sequence. The overdubbed dialogue of a six-year-old girl that is clearly a voice put on by either an adult woman or an elderly man? Charming. The ancient witch whose face is so beat with makeup she wouldn't be out of place in a season of RuPaul? Flat out genius. And don't even get me started on Santo's outfits, every single one of which is bestowed with his signature mask, whether he's in the ring or just at a business meeting. 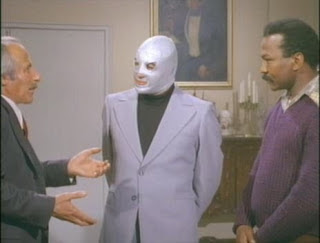 And while I wouldn't say the good stuff in Santo reaches a particularly astounding height (there's a definite quality ceiling for the budget level we're working with here), there is some marvelous material to play with. The score is an excellent bit of frothy adventure fun, the keening high notes mimicking the Llorona's cries over an irresistible 70's groove rhythm. And there's at least one moment of near-dadaist perfection: when one of the good guys is being slapped over and over again by a mafioso, the score erupts into a frenzied drum solo that's both hilarious and somehow perfectly in line with the intent of the scene. It's a heightened fantasy world where wrestlers save the world, good triumphs over evil, and gods and monsters wander the mortal plane, and the score knows exactly how to go about creating this world.

But now it's time to get down to brass tacks: I'm here for one reason only and it's La Llorona, but she is certainly not the reason the movie is here. We're much more focused on Santo wrestling mafiosos with the leaden repetition and obvious buildup of musical numbers in a not-so beloved Broadway play. While these fights can be fun (especially when Santo uses the people holding him back as launchpads to leap into the air and kick somebody else right in the head), they distract from the monster who's supposedly at the center of everything.

It's probably for the best that La Llorona doesn't get too much screen time because the mask they use to give her a wizened corpse face is so stiff and unmoving, it's almost like it was cast in concrete. Except for the one scene where her tongue keeps poking through the mouth slit, which is somehow even worse. But she is the coolest element of the film, her resounding cry of "Ay, mis hijos!" cutting through to the bone every time it screeches across the soundtrack, and any shot that focused her tattered dirty dress and mottled feet as they shuffle along is truly chilling.

This is a lucha libre movie first, a mafia movie second, a witch movie third (yeah, the Llorona is teamed up with an immortal witch who is a very random addition, though admittedly she gets the coolest, most threatening lines in the movie), and a Llorona movie dead last. So for the purposes of this particular marathon it's a bit of a dud, even if I did have a blast in the process.