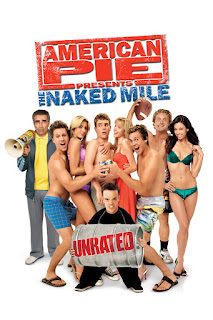 Now I know I just started my most ambitious marathon of the year with Tears for Fears, but you didn't think I'd just up and forget about my American Pie spinoff marathon did you? No, we've still got three of those left unfortunately. This time we're hitting up The Naked Mile, from the director of Sydney White, a college frat movie that I actually liked quite a bit as a kid. Let's see if that goodwill carries over, shall we? 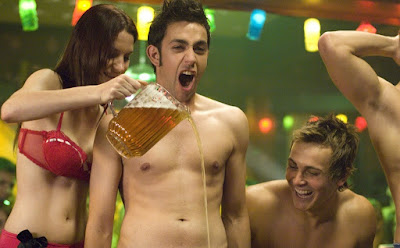 I'll give you one guess.

I suppose it's good that canonically the Stifler family is a bunch of f**k monsters, because the way these movies introduce relatives we've never heard of before is alarming and unsustainable. Erik Stifler (John White) is the cousin of Matt and Steve Stifler (the former of which appeared in Band Camp, the latter of which refused to appear in any of these), and has failed to live up to the family name because he's still a virgin. His girlfriend Tracy (Jessy Schram) wants to satisfy his desire to lose his virginity, but isn't quite ready to do it herself yet, so she gives him a free pass for the weekend, a choice she instantly regrets. 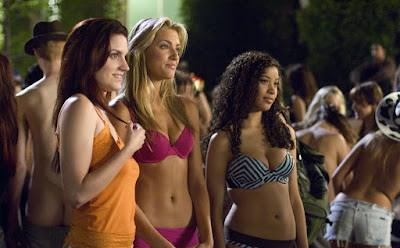 The parade of nameless women wait in the wings, their divine purpose to aid a man on his sexual journey sated for the time being.

For about ten minutes, The Naked Mile looks like it might just be an actual good movie, landing somewhere between the heights of the first two original films and the mediocrity of an American Wedding. There is a deep commitment to an extravagant gross-out gag that might not be to your taste, but shows a valuable fearlessness on the part of the screenwriters, and the conversations between Erik and Tracy set up a movie with an almost To Do List-esque progressive view on the double standards about men's and women's virginities, with the added bonus of a boy conflicted about being put into a box he doesn't really identify with simply because of the way his family is. And it does come back to it at least a little bit in the final five minutes. But oh, all that chaff in between the wheat...

The instant this film sets foot on a college campus, every ounce of narrative momentum, thoughtful character-building, or whiffs of progressive sensitivity are tossed out the window and left shattered on the side of the road, much like Erik Stifler's phone when his friend casually tosses it out the window so he won't see a message from his girlfriend revoking his free pass. There's so much wrong with this scene that I can't even begin to unpack it (let's hope phones were less expensive then, for one thing), but then again there's so much wrong with the movie proper too.

I reeeally don't want to get into the reprehensible representation of the rival frat as a house of little people, save to say that it's odious and that we need to make a little people remake of Citizen Kane or something to make up for what Hollywood has done to them since the beginning of the medium, or at least The Wizard of Oz on. 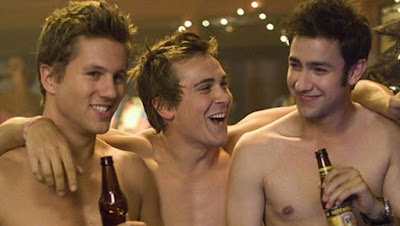 Not that I'd trust these guys with... well, any type of film honestly.

Not only is the college material nasty and dim-witted, it's obscenely boring. There is a football sequence that feels like it was shot by Béla Tarr, resolutely refusing to end under any circumstances. And the party scenes are much the same, forcing you through a never-ending gauntlet of mediocre actors adopting rictus grins of good cheer while performing irritating frat antics. It not only doesn't live up the promise of the opening ten minutes, it actively spits on that sequence and poops in its shoe.

And now for the requisite discussion of Eugene Levy. This is where his cameos really start to go downhill. The thin excuse for him being at the camp at least was a tenuously believable excuse, but The Naked Mile is where things actively start to break down his character as established by three movies that actually mattered. For one thing, he seems to know way too many teenagers who are at least six years younger than his own kid, but for another he is positioned as some kind of frat legend, which sacrifices a lot of character continuity just for the joke of a prudish parent being in charge of The Naked Mile. Spoiler alert, I guess, but who could possibly care.