Reviewing Jane: The Person, Be It Gentleman Or Lady, Who Has Not Pleasure In A Good Novel, Must Be Intolerably Stupid 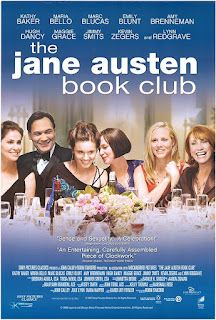 The menopausal rom-com Book Club hit theaters earlier this year to the delight of almost nobody, but one positive to its release is that it had me thinking about reigniting my dormant Jane Austen marathon, which slumbered a bit during my summer of slashing. Honestly, it's an excellent way of transitioning back between the two, because once again we revisit an older title that is in some way thematically linked to a new film. This time it's The Jane Austen Book Club, another film about how the literature that women in a book club choose to read bleeds out into their personal lives. Only this time it's a lot less elderly raunch and a lot more illegal activity with minors. 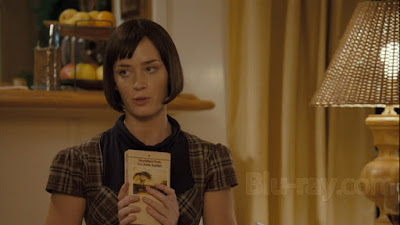 And wigs so bad they qualify as a capital offense.

In the Jane Austen Book Club, a group of friends who have no reason to hang out with one another and seem to actively hate each other most of the time start a book club. About Jane Austen. And wouldn't you know it, but their lives are kind of similar to Austen's novels. Sort of. At least, Jane Austen's novels as interpreted by a high school senior who skimmed her Wikipedia entry.

Each of the main characters leads discussion on a novel, which shockingly ties into their own storylines:

Prudie (Emily Blunt) is a clumsily-named high school teacher who is nursing a crush on a student (Kevin Zegers) and ignoring her useless husband Dean (Marc Blucas, of the least-liked season of Buffy the Vampire Slayer), but might just find a way to rekindle their romance á là Persuasion.

Bernadette (Kathy Baker) is six times divorced and the mother of the group, just like Pride and Prejudice I guess.

Sylvia (Amy Brenneman) is a librarian who is separated from her terrible husband Daniel (Jimmy Smits), and much like her book Mansfield Park, she... marries her cousin? OK, I honestly don't see the connection in this one.

Allegra (Maggie Grace) is Sylvia's lesbian daughter, an impulsive girl who lets her heart lead her like Marianne in Sense and Sensibility.

Jocelyn (Maria Bello) is a happily single dog breeder who acts like Samantha Jones on downers. When she meets clueless tech wunderkind Grigg (Hugh Dancy), she tries time and again to set him up with Sylvia, not noticing that they're perfect together. This one actually has a lot in common with Emma, so good on them. Also Grigg is a sexy idiot like Catherine Morland in Northanger Abbey.

This movie has an unmotivated pan all the way down to his crotch, which is in and of itself an argument for why more women should direct movies.

As I've already intimated, the screenplay for The Jane Austen Book Club is... not the best. Not only is it a jumbled mess that favors the worst, flattest characters in terms of screen time, it is replete with terrible Oscar monologues where a character sits someone down and tells them their entire backstory in one fell swoop. It's crudely constructed pabulum that whips up conflict out of nothing and always ends each segment with someone storming out of book club.

This quotidian style of drama might have been actually evocative of the storytelling of Jane Austen if the movie didn't insist on being ever so slightly edgy, in that way that pushes the envelope exactly zero point one degrees. It pulls its punches so radically that the lesbian character fades away like a ghost, the toxic heteronormative relationships patch themselves up presumably to the detriment of everyone, and Prudie's hideously inappropriate crush is treated like an actual viable option for her to pursue. The latter storyline is just sick when presented this way, and has no place in the middle of everyone else's more grounded subplot.

Emily Blunt the actress is doing a serviceable job bringing this cartoon character to life, but she's hardly the standout in a cast of people just barely making an impression, lost in a whirlwind of empty bloviating dialogue and Brits forcing American accents. 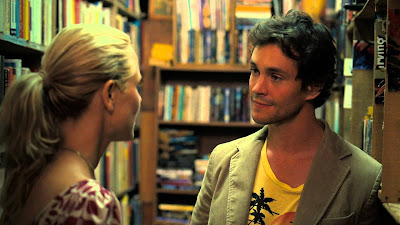 At least the movie is a drama, because the brief attempt at humor produced the ear-splitting pun "A Nightmare on Northanger Abbey Street," so the movie could have been much worse if it attempted to be funny all the way through.

The one thing I will say about the film is that, unlike Book Club, the characters actually do sit down for in-depth discussions of the books. I like the fact that the film assumes its audience is literary enough to understand references to Fanny Price and Captain Wentworth, and allows its characters to be intelligent and engage with the material. Maybe that doesn't make for a good script, but it's actually authentic, a quality that this movie desperately lacks at most turns.