Teen Homicide (Don't Do It) 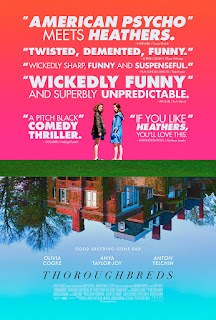 When you bill a film as the second coming of Heathers, you know I'll be first in line. Unfortunately, you can bill a film as whatever the hell you want. The advertisers weren't lying. Thoroughbreds is a pitch black high school comedy about murder, after all. But we should all know by now not to violate the cardinal rule of reminding audiences of a movie much better than your own. 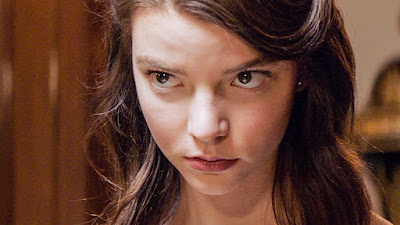 Come to think of it, you're reminding me of The Witch too. Stop it!

In Thoroughbreds, well-to-do teenager Lily (Anya Taylor-Joy) is paid off by the mother of the only slightly less well-to-do Amanda (Olivia Cooke, who also held a starring role in Ready Player One, so this is a pretty big month for her) to host a tutoring session in the hopes that they'll become friends. This actually works, but probably not in the way mom was planning. It turns out that Amanda is an emotion-free sociopath, and Lily takes advantage of her total lack of conscience to plan a murder.

She wants to take out a hit on her evil stepdad (evil is a malleable term here: we see him being generally disagreeable, but her perception of him is certainly skewed) Mark (Paul Sparks). They eventually draw in strung-out drug dealer Tim (Anton Yelchin, in what would seem to be his final role) to help with the plan. 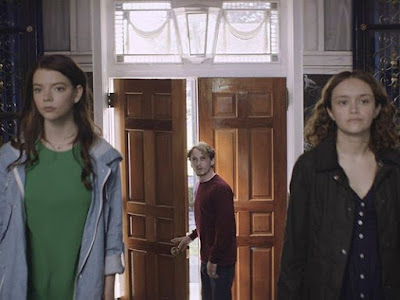 He's the only one in the movie whose income is below like 10 figures.

Thoroughbreds is the writing and directorial debut of playwright Cory Finley, and it shows. It has all the limitations of setting and cast that a low budget debut would traditionally display, but it's also restricted to an absurdly small range of motion per scene, a pretty obvious holdover from the fact that this movie was originally written as a stage play. It's a static motion picture, and it never throws off the shackles of its theatrical origins. There's nothing wrong with a lot of scenes that are just two or three people talking to each other, but it's not presented with any particular cinematic flair. It's like eating a Pop Tart without any frosting. It's still a Pop Tart, but there's something so fundamental missing that it's not the same experience at all.

Now the script is pretty solid, of course. It's not as richly comedic as I was hoping, but there are certain dark situations and dialogue beats that raise a worthy chuckle. And the ideas it raises about emotion/the lack thereof in the teenage population, or how easy it is for wealthy people to toy with the poor are fun to chew on.

It does tend to slip a bit too often into an over-literary mindset (this film is divided into chapters for absolutely no reason, other than to seem impressive and Smart), and the closing monologue leaves a lot to be desired - its attack on social media and technological advancements seems ripped from a completely different movie, because it has absolutely zero foundation in the story we've been watching. I don't think there's more than 90 seconds of actually even seeing a iPhone onscreen in the entire movie. 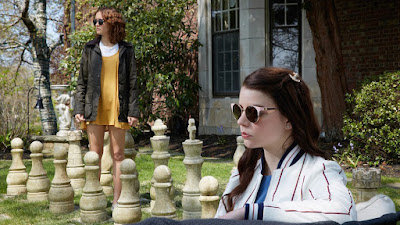 Look at these teens, so absorbed in their Chapsnats, not engaging with the real world, not going to Applebee's...

Everything in Thoroughbreds is kind of uneven in this way. Take the sound design, which sometimes creates incredible feats of audio, like the scene where the whirring of Mark's exercise machine keeps his stepdaughter awake. The noise builds and builds until she finally snaps, and you believe it. But most of the rest of the soundtrack is occupied with a truly unhinged score that sounds like composer Erik Friedlander is snapping rubber bands underwater. It's manic as hell, and while I secretly kind of like it, it's deeply distracting from the quiet dialogue-based story we're meant to be watching.

And then there are the two teen girls who lead the film. They're unequivocally great, and the fact that there are two teen girls bearing the entire weight of this movie on their backs is something tremendously fun and inspiring. Unfortunately, Anton Yelchin, who I like very much, seems to be acting in a completely different movie. He's being pushed into a cartoon character that would have worked in a film like Fright Night or even the bizarre Only Lovers Left Alive (he sure did make his share of vampire movies, didn't he?), but glances right off the grounded, intentionally flat performances of his co-stars.

Altogether I'm pretty sure I liked Thoroughbreds, but I'm absolutely certain that it takes someone of a very particular bent to love it, and I'm definitely not there. This movie makes me continue to be excited to follow the careers of Anya Taylor-Joy and Olivia Cooke, who I have seen and enjoyed in many previous genre efforts, but Cory Finley really needs to knock it out of the park next time to earn my trust.

TL;DR: Thoroughbreds has a solid dark comedy nugget at its center, but it's too stagebound to really do anything exciting with it.
Rating: 6/10
Word Count: 871
Also sprach Brennan at 9:26 AM