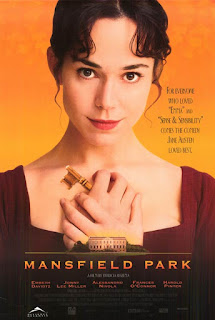 Mansfield Park has been described quite rightly as Jane Austen's most controversial novel, though not for the steamingly erotic reasons the marketing of the 1999 film would seem to suggest (and don't get your hopes up folks, suggestion is all there is). Mansfield Park is essentially a morality play, Austen's most po-faced and didactic work in her entire short career. The way it enforces the etiquette and strictures of Regency society can be punishing to modern readers, and requires a lot more context than most of her other work. It is not a novel for the impatient, so adapting a film from the story necessarily required a lot of adjusting and rearranging. Let's see how they did! 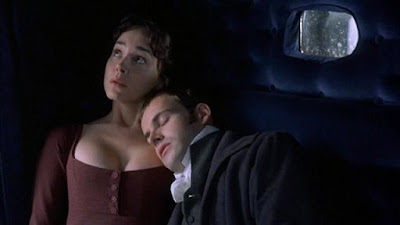 So far, so busty.

Mansfield Park tells the story of Fanny Price (Frances O'Connor), a poor young woman who was sent at the age of 10 to live with her rich relations: the tyrannical imperialist Sir Thomas Bertram (the playwright Harold Pinter), the lazy opium addict Lady Bertram (Lindsay Duncan), and their children, the entitled drunkard Tom (James Purefoy), the well-mannered nice guy Edmund (Jonny Lee Miller), and prissy, boy-crazy daughters Maria (Victoria Hamilton) and Julia (Justine Waddell). In the book, Fanny Price is a bland, passive character who is tossed around by these careless, larger-than-life personalities.

That didn't really work for making her the protagonist of a movie, so they have her a personality, and that personality was literally Jane Austen's. In a montage they show Fanny writing most of Austen's juvenilia (her early, posthumously published work), and they force her into the "anachronistically modern girl sarcastically fighting against the foibles of her time" mode in which most portrayals of Austen or her most beloved character Lizzy Bennett can usually be found. This completely and utterly destroys any reason this particular story had to exist, but whatever. Their lives get tangled up in lusty and romantic twists and turns when the seductive brother and sister Henry (Alessandro Nivola) and Mary Crawford (Embeth Davidtz) come to visit. Drama ensues. 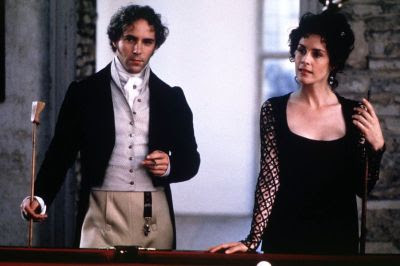 They're certainly dressed for it.

We do really need to dig deep into the character of Fanny Price. She's the moral center of the book, and while there's no denying that she's a boring stick in the mud, there's literally no point to the story if she's not boring. She's supposed to be the steady center amidst the chaos of youthful licentiousness and adult hypocrisy whirling around her. By making her interesting, the story loses its lynchpin and the wheels rattle off, sending it all crashing to the ground.

It doesn't help that the other changes made to the material are entirely superficial, like adding a fresh coat of paint to a wall that's full of sledgehammer holes. As I already mentioned, this film was billed as a sexy, steamy romance, that element mostly relegated to a pair of scenes that require an extremely  liberal reading of the source material to mutate Mary Crawford and Fanny's relationship into a bizarrely sublimated lesbian affair. It's nonsense that exists only to be provocative, and it barely succeeds at that because of the way it pulls its punches, demurely hiding behind its implication.

The other major embellishment on the source material is the addition of a much more prevalent angle on slavery. In the book, it is only mentioned Sir Thomas Bertram has property in the South American colony of Antigua, though readers at the time would probably be aware he held slaves. But that fact is drawn into the light here, making his slave-driving an important facet of the narrative and the drama between his character and Fanny Price. Unfortunately, Mansfield Park completely fails to make any point about slavery and the way the family profits from it. It's just one more ingredient to some overbuild melodrama, and the big conflict about it (involving some way-too graphic depictions of rape and torture) is resolved offscreen, so it's obvious once again that the filmmakers were too shy to actually go through with their bold reinterpretations. 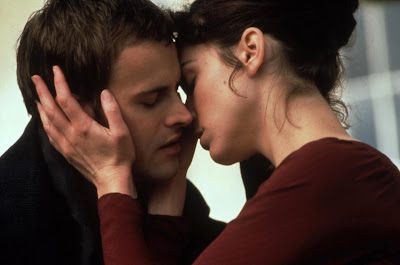 I mean, what's the point when we could be watching straight white people almost kiss?

Really, Mansfield Park is a thorough waste of time. But there's at least a spark of what the film could have been. It's still funny, as almost any Jane Austen adaptation has to be - at least briefly. The standout character is the same as the novel: Sheila Gish's manipulative, self-indulgent Aunt Norris. Her pert little reactions to hugely tragic situations are amusing to be sure, and any scene with her in it seems to perk up a bit, even visually speaking. She is present for most of the visually creative moments Mansfield has to offer. In fact, perhaps the best is a smash cut to the death of Mr. Norris, as described by Fanny in a letter to her sister (these letters, which are presented by Frances O'Connor speaking directly to the camera, are the only other times that the movie actually tries to accomplish something stylistically unique).

These sequences are few and far between, but the movie has the gall to end on a beautiful series of tableaux that gently break the fourth wall as we follow each of the characters' fates in the epilogue. When Mansfield Park actually uses the medium of cinema to breathe life into one of Austen's most lifeless novels, it accomplishes a great deal, but unfortunately they're mostly content to have the narrative crumble around them just like the walls of the titular manse.

The romance here isn't even compelling. Whereas in the novel, we see Fanny pining for her cousin throughout the entire story (gross), here her more active character causes him to pine for her, which deflates every scrap of drama that is supposed to be created by his fervent, blind interest in Mary Crawford. I'm not here to complain that they changed details from the novel. This is what movies do. But did they have to change the detail that fundamentally fuels the entire romantic conflict? It's monumentally fatiguing. Every choice that was made in this adaptation was the wrong one, and the budget doesn't provide for sets and costumes lush enough to redeem it by at least allowing you to sink into cozy period domesticity.

I obviously have a lot of patience with these things, so please don't take my warning lightly. Don't waste your time with this one.