Reviewing Jane: Think Only Of The Past As Its Remembrance Gives You Pleasure 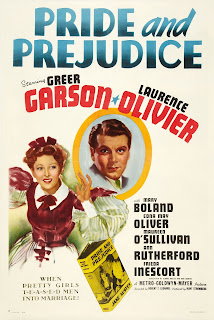 It's probably hard to believe, but the current elite status that Jane Austen holds in popular culture hasn't always existed. Sure, she was a well-known enough author that she was certainly read by scholars and taught in schools, but the Austenite fervor that warps the minds of the heroines of Austenland or The Jane Austen Book Club is a product of the 90's, and the boom of Austen adaptations that came in the wake of the massively popular BBC miniseries of Pride and Prejudice.

So this entry will be one of the very few points that our marathon will dip into a point outside of recent memory. Although TV miniseries versions of Austen's work have been around since the beginning of time (the first recorded one seems to be a 1938 UK production of Pride and Prejudice made during the advent of television that was - obviously - sparsely viewed), only two feature length adaptations floated their way across the cinema landscape before the 1980's: a TV movie of Emma in 1948, and the topic we'll be discussing today: the Best Art Direction Oscar-winning Pride and Prejudice, from 1940. 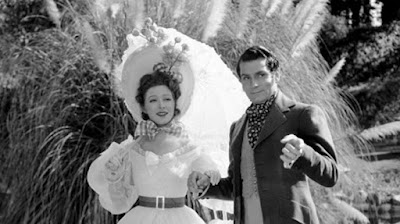 It's also a nominee for Best Ridiculous Hats in this particular marathon, but there's some stiff competition.

Please tell me you know the plot by now. In old-timey England (this particular adaptation, led by - of all people - screenwriter Aldous Huxley, who is perhaps best known for the classic dystopian novel Brave New World, seems to transplant the setting from the Regency era to the Victorian era, but the hats and the accents are pretty much the same if you ask me), Lizzy Bennett (Greer Garson) is the second eldest daughter of the five unmarried Bennett sisters. When her older sister Jane (Maureen O'Sullivan, who played another famous Jane in the 1932 Tarzan the Ape Man) falls in love with new neighbor Mr. Bingley (Bruce Lester), Lizzy must contend with his haughty and supercilious friend Mr. Darcy (Laurence Olivier) as they enter a will-they won't-they relationship based on mutual distrust and prejudice. 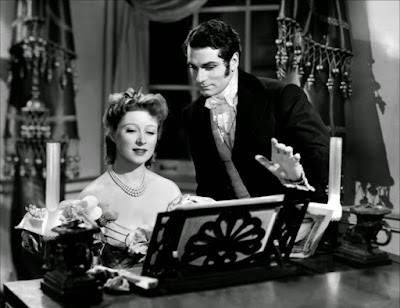 1940 sure was a different time for filmmaking, and the ways in which this Pride and Prejudice is different from, say, the 2005 incarnation, are endless and fascinating. Cinema under the production code had a sort of old-fashioned gentility that you'd think would lend itself to Jane Austen's work, but the tropes and performance styles that the era brought with it make for an incredibly strange concoction.

To that point, the two leads here are excruciatingly miscast. Greer Garson is nearly twice as old as her character (Lizzy Bennett is no older than 21, and Garson was 36 when she starred in the film), but that wouldn't matter if she understood the role one tiny bit. She gives exactly the performance that one would expect from a glamorous movie star of the time, with all the elegant posturing, mincing gait, and overenunciated dialogue that would imply. She's not chewing the scenery at all. She's swallowing it whole. While anyone who has read the book would know that young Miss Bennett is (to use an odious, but popular term) "not like the other girls," Garson plays her like Queen Victoria herself. It's a complete obliteration of the character as written, and makes for a dazzlingly uncompelling protagonist.

Someone who would seem to agree with me is Olivier himself, whose active disdain for the project soaks through every scene he's in. And this is no mere speculation. During my brief period of research on this movie, I discovered no fewer than a half dozen quotes, all colorfully displaying his disdain for the film and practically every decision made on set. He never gets a foothold on the character, and plays him like any generically handsome leading man. So we have an aristocratic Lizzy and an apathetic Darcy forming a huge black hole in the center of the movie where their romance should be. It's nothing less than tragic. 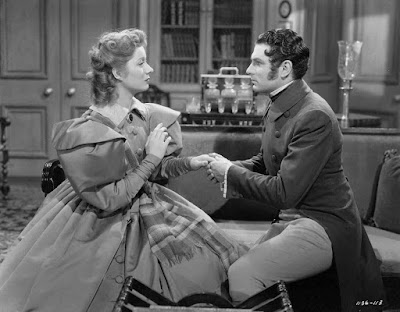 Well, I guess it's technically a black-and-white hole.

Although literally the whole reason this story is being told - the romance - is such a dud, there is enough material working around the sidelines that this Pride and Prejudice is far from a bust. If any other work of 19th century literature had been reworked as a broad romantic comedy, it might have been jarring, but this approach draws out the inherent character-based humor in Austen's work, and the raucous personalities that bounce off of Lizzy during her journey to true love are all splendid.

At the top of the heap is Mary Boland as Mrs. Bennett. She is third-billed for a freaking reason, because she is the glue that holds this entire movie together. The character gets a lot more screen time than any other adaptation I've seen (and I'm already on my way to seeing a medically unhealthy number of these), and her portrayal of the woman as a conniving, meddlesome puppetmaster pulling the heartstrings of her children is a triumph of classic rom-com confection.

She walks into every scene like she owns the place, and her lively, amusing energy is irresistible. Her transparent desperation is so overheated that there's literally a carriage race within the first twenty minutes of the movie. That kind of setpiece isn't exactly common in Austen movies, and she is the only reason Pride and Prejudice generates the off-kilter, cheerful adrenaline that it does. 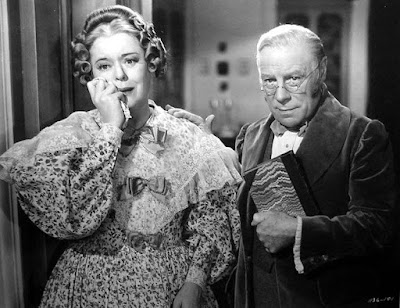 Mama sure does have a reason to be proud.

There are other characters worth looking at here (would-be cousin-husband Mr. Collins is especially pompous and obnoxious here, and younger sisters Kitty, Lydia, and Mary get their due; the former two as giggling tipsy maniacs, the latter as the uptight, try-hard geek she was always meant to be), but if this movie was a one-woman show with Mary Boland, it might just be the best comedy of the 40's.

Part of the reason these characters are allowed to sparkle so much more than other adaptations is Aldous Huxley's script, which restages many major scenes, embellishes some, and truncates others in the best combination possible. His additions to the script are clever and amusing, while still effortlessly fitting into Austen's tone and vernacular. The only damage he does is to make the bourgeois badass Lady Catherine more of a toothless goofball, but that would have required making the film even longer, and I don't think anybody particularly wants that.

All in all, Pride and Prejudice is a reasonably good time. The cheery library music and chewy British accents that remind you of nothing more than Georgia King in Austenland make for a mostly sweet walk through cinema history, and the fact that its terrible leads don't damn the movie to an early grave means that everything else here is working at full steam.