Reviewing Jane: What Are Men To Rocks And Mountains? 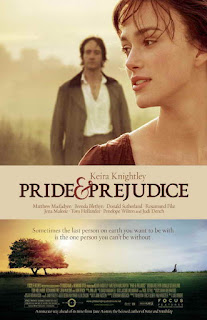 Pride and Prejudice is, without a doubt, the cornerstone of Jane Austen's brief but powerful writing career. Almost inevitably the biggest hit from an artist is never actually their best work, but while I haven't finished my readings yet (Emma and Persuasion, here we come!), I feel confident enough to say that the people aren't exactly wrong. There are other books I have enjoyed just as much, but there's no denying the magnetic pull of the Bennett family and their exploits.

The novel's fame has led to no dearth of adaptations, so prepare to spend a lot of time in Darcy territory. But there's no better place to start than the definitive film version of the story, the 2005 Keira Knightley vehicle from a pre-Atonement Joe Wright. The Colin Firth miniseries is generally hailed as the magnum Austen opus (more on that later), but this ain't no TV blog, is it?

I'm pretty sure the basic plot of Pride and Prejudice courses through the blood of Anglo pop culture, but how about a little refresher? Mr. and Mrs. Bennett (Donald Sutherland and Brenda Blethyn) have five unmarried daughters to wrangle. In descending order: Jane (Rosamund Pike), the fairest, who lacks the ability to find a single fault in another human being; Lizzy (Keira Knightley), a clever and sarcastic girl who doesn't take life and love too seriously; Mary (Talulah Riley), the plainest daughter who thus feels the need to be smarter than everyone else; Kitty (Carey Mulligan, who we've already crossed paths with in Northanger Abbey), a giggly flirt; and Lydia (Jena Malone), the giggliest and flirtiest of them all.

When the wealthy twink Mr. Bingley (Simon Woods) arrives in town, he immediately falls for Jane. The friend he has dragged with him, the taciturn Mr. Darcy (Matthew Macfadyen), falls less immediately in love with Lizzy, upon whom he makes a terrible impression with his prideful disdain of her looks and her family. Thus begins a genteel comedy of errors where these two crazy kids just can't seem to get it together. 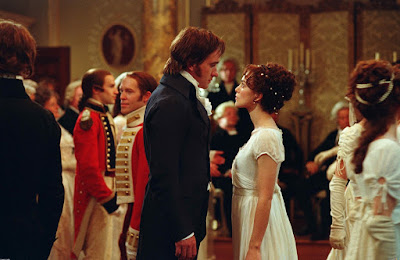 It doesn't help that he refuses to undo the buttons on his collar until like two hours into the movie.

The thing they don't tell you in high school is how hilarious Jane Austen's work is. They think that for a work of literature to be important, it has to be serious, but that chokes out everything that's most elegant and essential to the woman's work, which was a delicate satire of human behavior that is so universal that it rings true even outside the context of the prim, unrecognizable society of Regency England. Thankfully, Pride and Prejudice does not commit the sin of ignoring that humor.

I wouldn't be so insane as to call this film a comedy, but the actors and screenwriter really do capture the jovial, winking quality of the narrative that pulses beneath the romantic drama. The awkward fumbling of feelings that can sometimes feel dry on the page comes to savage, remarkable life here from top to bottom.

First in line to be commended should be Simon Woods, whose Bingley is a stammering, gleeful idiot that captures the heart immediately. But let us not forget Tom Hollander as the obsequious, oblivious Mr. Collins, a role he imbues with a constantly jarring intensity. But hey, there are leads in this movie, and I'm busy complimenting the supporting roles, as I am generally wont to do. Let me just say this: There is a reason Knightley is the definitive Lizzy Bennett and Macfadyen is not the definitive Darcy. I'm not knocking him (a scene where he can't figure out whether to sit or stand alone earns him my esteem), but Knightley floats across the top of this movie like an angel, delivering her dialogue with grace and wit that perfectly represents the way that every teen girl views themselves. 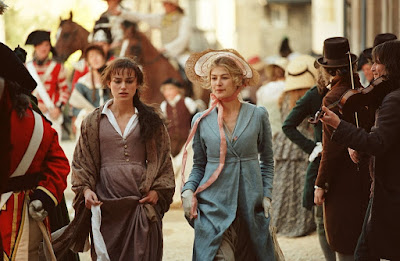 That said, I could do without QUITE as much brown in her wardrobe, but what are you gonna do?

Although Joe Wright obviously has spent a lot of time bringing these characters to life, he also cares about much more than merely delivering Jane's reliable ol' dialogue to audiences for the umpteenth time. He wants to craft a piece of cinema and while sometimes that eagerness spills over into bizarre excess like the rapid zoom that highlights an awkward moment in the Pemberley household, his vision is generally lush and stunning.

If Pride and Prejudice was just landscape and manor home photography without a single living creature in sight, it would be a pretty great movie. The dewy, romantic glow of England has never been more palpable. But there are people in this movie, and he shoots them so well! His Steadicam never fails to rove across the bustling halls of whatever estate our characters are occupying at the moment, sending viewers deep into his vision of the period with long, uninterrupted takes of life being lived. He also makes certain bold choices that burn themselves into the memory, most effectively a dance sequence that busts realism wide open to isolate Lizzy and Darcy and their sudden, yearning connection.

In short, Pride and Prejudice is a beautiful work of cinema, a lovingly thorough work of adaptation (he restages several scenes from the novel and truncates others, but the full breadth of the story and its emotional impact are entirely present), and a vivid resurrection of Austen's trademark humor that never for one second feels stuffy or dry. Really the only reason I'm marking the movie a little lower than this review would lead you to believe is the fact that I hated Darcy's hair, and couldn't convince myself that Lizzy would find him attractive during the first half of the movie.

Come on, this is a romantic comedy. We can afford to be a little petty with our lovers. It's still a good movie, leave me alone.

TL;DR: Pride and Prejudice is a valuable cinematic interpretation of one of literature's most deservedly enduring novels.
Rating: 8/10