What Would Bryan Bertino Do? 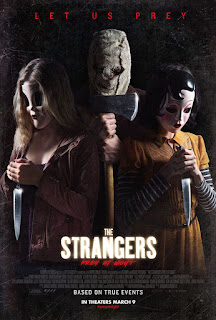 Honestly, the most surprising thing about The Strangers: Prey at Night is the fact that the 2008 home invasion shocker The Strangers didn't get a sequel immediately. As I pointed out in my review, it's not a movie that I love, but it wholly deserves its modern classic status and those instantly iconic villain masks should have already launched a sprawling franchise that we're just starting to get sick of by this point. But here we are. It's been 10 years, and now we're at the point where we can say, "wait, really?" 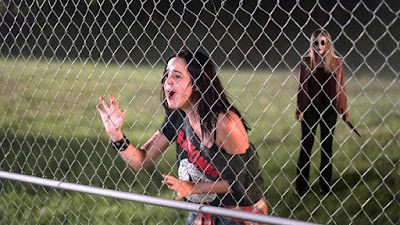 The times, how they change.

In Prey at Night (which - by the way - is a title I just can't abide. Is it a pun? On what?), a family is traveling to their uncle's secluded trailer park on the way to dropping off delinquent teen daughter Kinsey (Bailee Madison) at a correctional boarding school. Mother Cindy (Christina Hendricks) and father Mike (Martin Henderson) have their doubts about their decision, and brother Luke (Lewis Pullman) is just along for the ride.

As you might imagine, they never make it to that school because a trio of masked strangers descend on the park with flashing knives and an aim to wipe this family off the face of the Earth. 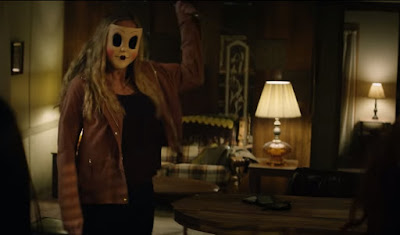 But not before repeating as many scenes from the original as possible.

Prey at Night is one of those "is it a sequel or is it a remake?" situations, and the answer is yes. It's a sequel to The Strangers. And it's a remake of every John Carpenter movie ever made. Director Johannes Roberts made a conscious effort to channel as much of the style and substance of 80's horror as it's possible to do in 2018 (turns out, it's very possible). Prey at Night grafts the score from The Fog onto the cinematography of Halloween onto a showdown from Christine - with some Scream and Texas Chain Saw sprinkled in for flavor. Sure, 80's pastiche in modern horror is about as uncommon as people shouting "who's there?!" but injecting it into this grim franchise is especially jarring and doubly refreshing.

You won't catch me complaining about synths being liberally slathered over a movie, and though this score (by Becoming Jane composer Adrian Johnston, for some reason) is by all accounts almost note-for-note The Fog, at least that great score is finally applied to a movie that's not boring as sin. Although, I do have my breaking point. The many 80's pop needle drops - provided by the male killer's obsessive, Baby Driver-esque need to have the radio playing while perpetrating murders - just don't do anything for me (save for one major scene involving just a splash of Bonnie Tyler, who makes any scene better).

The cinematography is also slick, fog-filled candy. It might be a little too reliant on dubiously long establishing shots and sluggish zooms, but its excellent, judicious use of swooping crane shots and dashes of neon are a starling improvement from last year's Roberts' feature 47 Meters Down, which had the most painfully ugly color scheme I'd seen in over a decade. 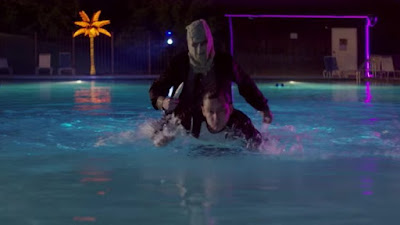 I could swim in the colors of this movie anytime.

Love the aesthetic of Prey at Night though I do, it's still just as flawed as the original film, in strangely similar ways considering how very different the movies are as a whole. The only true liability here is the Kiwi actor Martin Henderson, who attempts to hide his accent Walking Dead-style behind a Southern drawl that only draws more attention to how out of place he is in this cast, but oh what a liability. Any scene he shares with his son loses emotional impact by the ton, as their attempts at igniting hysteria mostly just look like they're working on their Beavis and Butthead impressions.

There's also the problem that these characters are complete, eye-gouging idiots. The decisions they make rarely resemble an action any human being has taken in recorded history, and the way they're forced through a litany of horror clichés doesn't even make them particularly interesting stupid decisions.

But Prey at Night has a secret weapon. I don't know how much weight this will carry with hardcore fans of the original film, but at the very least it's is certainly less of a dour slog. The audience I was with almost immediately got swept up in rooting for the protagonists, and there are a lot of moments that elicit cheers or groans. It's a roller coaster ride that pumps up the adrenaline more than a grim boot of misery stomping into your throat over and over again.

That's definitely more my style... But it's not really a Strangers movie, ya dig? If you loved the original, you might actually want to turn back before buying a ticket. That's probably not the sphere a sequel should exist in, but it's the truth. It's fun on its own terms, and those masks are still entirely terrifying, but they're completely different, equally fine movies.