Reviewing Jane: Now I Must Give One Smirk, And Then We May Be Rational Again 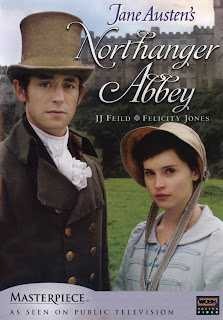 Jane Austen's novel Northanger Abbey is defined by a certain lack of plot and a coterie of hilariously biting, satirical characters, so it's probably the most likely entry to be adapted into a film that exactly fits my tastes. There's nothing I love more than a brisk, character-driven movie. But unfortunately, Northanger Abbey is perhaps the least known and least respected of her six novels, so it was never going to get the grandiose big-budget treatment of a Pride and Prejudice (take your pick which one I'm talking about). 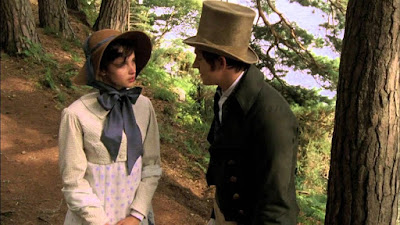 It's just one of the endless pitfalls of having good taste.

In Northanger Abbey (the 2007 Masterpiece production, and boy oh boy is it going to be important to specify which one we're talking about as we get deeper into this marathon - there's literally two iterations of Emma from the exact same year), Catherine Morland (Felicity Jones) is a young teen from a family of ten. She's invited on a trip to the town of Bath with some family friends, and she doesn't hesitate at her chance to get out and see the wider world, which she's only read about in books.

Unfortunately, her perceptions of the world and the people in it are entirely based on the plots of the Gothic romance novels she devours, so she has herself a bit of a vivid imagination that hasn't exactly prepared her for the mundane realities and pettiness of the people she meets there. Although she falls in love immediately with the handsome gentleman Henry Tilney (JJ Feild, who we just saw playing a Darcy analogue in Austenland), she encounters certain obstacles in the form of the lecherous boor John Thorpe (William Beck), who fancies himself in love with her; his sister Isabella (Carey Mulligan, who we will see playing one of the assorted sisters in Pride and Prejudice - get ready for a bunch of overlaps, because the British do not skimp on their Austen adaptations), a false-faced dilettante who fancies herself in love with Catherine's brother James (Hugh O'Connor), until somebody better comes along; and Tilney's father (Liam Cunningham), a dictatorial tyrant with a nasty temper. 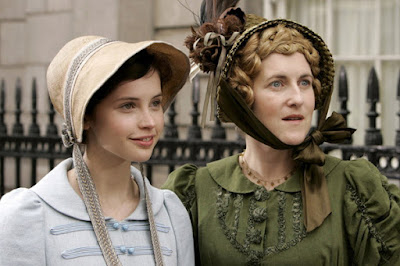 She is also exposed to a great number of terrible hats, such is the danger of the outside world.

Northanger Abbey is very clearly a low budget affair, but the good thing about shooting in England is that the whole country is basically a period piece, so it doesn't weigh on your wallet to find some grand crumbling castle or other to shoot in. So the locations at least provide a level of production quality that isn't reflected in, say, the lighting.

But one odd choice that makes itself immediately known is the way that Northanger Abbey sexes up the original storyline. This only rears its ugly head in a few cases - most notably in a dalliance between Carey Mulligan and someone who is patently not her fiancé, but also in some truly disgusting extras work that includes the line "she's a ripe peach ready for the plucking" - but it's a jarring decision that adds nothing to the work and doesn't commit hard enough to feel like anything more than lascivious window dressing. It's a horny movie, but it's still a Masterpiece Theatre production, so there's a very low ceiling for what is permitted here. It feels slightly at war with its own impulses, which I guess makes it in and of itself a perfect Jane Austen character, but definitely not a satisfyingly consistent narrative. 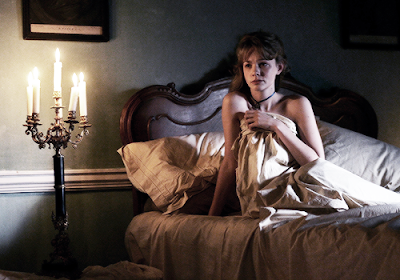 You can't just show SHOULDERS and expect to get away with it, Masterpiece!

Also there's no getting around the score, which is just tragically miscalculated. It's like the Harry Potter theme got co-opted by a Steamboat Willie short, and it cartoonishly underscores every minuscule movement onscreen. If it turns out it's not royalty-free library music, I'd definitely start to worry about the sanity of whoever composed it, because they clearly fundamentally misunderstand the tone of Jane Austen, and possibly humanity as a whole.

But hey, we can forgive a movie its budget if it's engaging, and Northanger Abbey is... well, it tries. The most important visual element introduced into the story is frequent Scrubs-esque cutaways to Catherine Morland's imagination of what any particular moment will be like. She recasts the important figures in her life into a grand Gothic soap opera that is tremendously fun to watch, and really highlights the character perhaps even more than the book manages to. Unfortunately, this element is dropped exactly where it is needed most - when Catherine's explorations of the titular home of the Tilneys lead her to some very dangerous, incorrect assumptions about the Northanger patriarch.

The plot of the third act suffers mightily from a lack of these fantasies, telling rather than showing the entire conflict that drives the climax. You need to have read the book to get even a drop of tension out of the plot at this point, and if your movie's success relies on a viewer having read the least well-known Austen novel, that is a gargantuan failure. 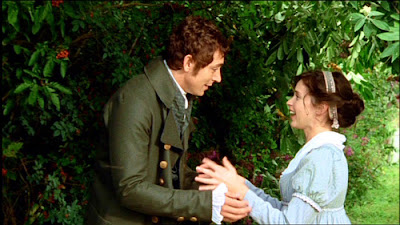 JJ Feild's face isn't a failure though, so that helps smooth things over.

But Northanger Abbey isn't all bad. The pacing is fleet-footed, zipping past so quickly, you couldn't possibly be bored. And while nearly the entire ensemble gives the kind of flat, utilitarian performance you'd expect from a Masterpiece production, the three leads all provide something exciting to watch.

Felicity Jones, on the one hand, is kind of awe-inspiringly terrible, and that's not nothing. She has a rough-hewn movie star charisma that you can't help but watch, even as she indulges in a routine of indicative gawping every chance she gets. It's like she's trying to be a mime or something, and it's fascinating, but you can see the potential for her to become to blandly functional leading actress we know her as today.

Acting circles around her are the real reasons to watch the movie: Feild and especially Mulligan. Feild's Tilney is rakish and charming without seeming too much like a romantic cypher, and he and Jones have a genuine chemistry. But enough about men. This is a Jane Austen novel, and Carey Mulligan is pulling out all the stops here, burying her character's hopeless self-absorption in a series of fluttery little genteel movements that are just aching to be watched rapturously by any fan of a good diva.

All in all, Northanger Abbey is a reasonably satisfying first venture into the world of Austen, if not particularly inspiring. There are going to be a lot of future movie stars lurking about these here parts, and that excites me, but turning her most shallow novel into an even more shallow movie doesn't exactly lend me toward recommending it.