Reviewing Jane: It Is A Truth Universally Acknowledged That A Movie Fan In Possession Of A Blog Must Be In Want Of A Marathon 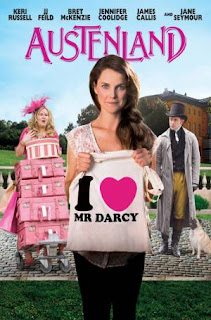 Yup, folks, this blog is about to get Jane Austen-ified. The boyfriend is taking a class where he has to read all six of her novels, and I thought I'd read along with him because like most humans on this planet, I'd only ever read Pride and Prejudice. We're halfway through already, and I've been enjoying it immensely. So you know what that means, readers... 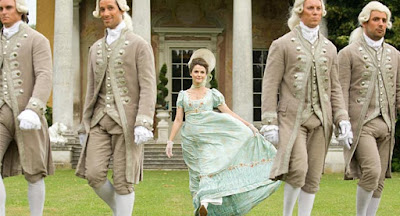 Get ready for a buttload of gentility!

In Austenland, Jane Hayes (Keri Russell) is hopelessly obsessed with the works of Jane Austen (I can't relate to that at all). Against the better wishes of her friends, she has sunk almost her entire savings into the trip of a lifetime: a resort that replicates Regency era romance with a troupe of actors and promises a (fictional) engagement by the end of the trip. But for somebody who has already immersed herself so thoroughly in Austen (although the screenwriters only seem to be aware of Pride and Prejudice and like one scene in Sense and Sensibility), the lines between reality and fantasy might just begin to blur.

Along with her fellow guests - the crass Miss Elizabeth Charming (Jennifer Coolidge) who seems to think she's at some sort of fantasy whorehouse, and Lady Amelia Hartwright (Georgia King), who is freakishly thorough in her commitment to role playing - Jane (adopting the name Miss Jane Erstwhile) must battle for the affections of the foppish Colonel Andrews (James Callis), the rugged explorer Captain George East (Ricky Whittle), and the standoffish Henry Nobley (JJ Feild). But sometimes, when the fantasy becomes too overwhelming to her, she falls into the arms of employee/stable boy Martin (Bret McKenzie), whose modern sensibility and scruffy reality she finds refreshing. 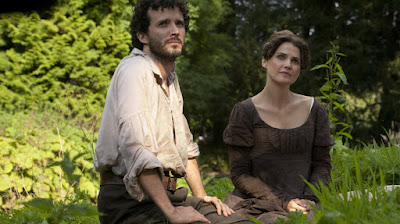 Austenland is one of the most conceptually broken romantic comedies I've seen in a good long while. Because honestly, Jennifer Coolidge is kind of right. There is something really creepy and manipulative about this whole process, not to mention the fact that it probably breaks a half dozen laws and statutes. And don't even get me started on the fact that a trio of customers does not the rent on a Regency manor pay. But economics and ethics aside, we should probably allow a movie its concept, especially when it's one as audacious and bizarre as this one.

The comedy that the film is peddling - while not in the least bit in the vein of something Austen might actually write - is at least charming enough to keep the whole boat afloat. It's quietly silly in a very British kind of way, and it takes a bit to ramp itself up into something genuinely sparkling, but it hinges on a handful of truly great performances. Jennifer Coolidge, of course, provides an endless source of off-the-wall humor (according to the filmmakers, she could barely be pressed to memorize her lines and just said whatever she felt like), and although her character is entirely one-note, the delivery is still sublime.

But for once in her beautiful life, Coolidge isn't the best part of this project. No, that would be Georgia King, whose body-and-soul commitment to her character's commitment is the most hilarious thing I've seen in a long time. It's a loopy performance, providing a funhouse mirror interpretation of British gentility from someone who has absolutely no idea what that actually entails. She physically dominates the screen with a series of prim little hops and exaggerated gestures, all marinated in an extremely peculiar, chewy accent that never fails to astonish in its inadequacy. 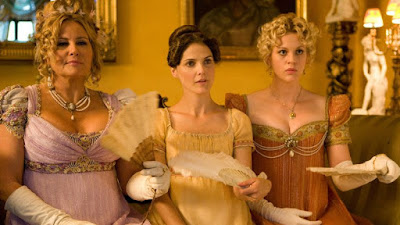 Look at all this comedy gold! And Keri Russell!

OK, to be fair to Keri Russell, the lead of a romantic comedy very rarely gets to be actually funny. She does her best to generate chemistry with every male lead and she succeeds, and that's the start and end of her duty to this movie. The men are of a piece less interesting than the women, though since when has that not been the case?

Beyond the actors, there's not much to look at in the film. It's presented in the rather flat, well-lit style of a comedy director who doesn't really feel like getting in the way. The soundtrack is pretty great, but digging any deeper past the characters isn't really worth your time. Austenland isn't about aesthetics. It's barely about plot! (And given the fact that it laughs off a sexual assault scene like it's a goofily eccentric bit of behavior, it's probably good that the plotting doesn't get center stage here) It's also a shallow scrape at the world of Austen, really underserving characters that really should at least pretend to know more about her books than the fact that Mr. Darcy was a grump.

But insofar as it's about wish fulfillment and charm, it gets the job done. Sometimes you don't need depth in a movie. You need to laugh at talented actresses doing their best to tickle your funny bone, and there's more than enough of them populating Austenland to have a good time from start to finish.

TL;DR: Austenland is a bit nonsensical, but charming in a way that - while almost antithetical to the work of Jane Austen - keeps you from disliking a single minute.
Rating: 6/10
Word Count: 926
Other Films Based on Jane Austen in General
Becoming Jane (Jarrold, 2007)
Miss Austen Regrets (Lovering, 2007)
The Jane Austen Book Club (Swicord, 2007)
Austenland (Hess, 2013)
Also sprach Brennan at 10:32 AM