I intend to run a post every month or so highlighting the films you should really be checking out in theaters, but considering this is March, the pickings have been a tad slim. let's just say I've seen seven movies theatrically since we last touched base, and though I didn't vehemently hate any of them, I only have one to recommend. Womp womp. 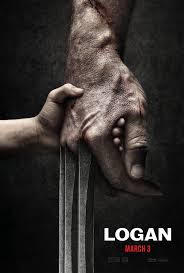 There may only be one, but it's a hell of a recommendation. Drawing strength from the success of the R-rated Deadpool, Logan leans in on its adult themes, creating a grim and dangerous world with immensely satisfying emotional payoffs for fans of the X-Men. Don't bother seeing the previous Wolverine solo adventures before this one, you won't need them. Hugh Jackman and Patrick Stewart revel in exploring new sides of their iconic characters and Dafne Keen gives a debut performance for the ages. A must-see.
Word Count: 149
Also sprach Brennan at 8:43 AM

Email ThisBlogThis!Share to TwitterShare to FacebookShare to Pinterest
Labels: Rewind