In which we review the cumbersomely titled Alien/Predator mash-‘em-ups in back to back mini-reviews, because Lord knows I don’t want to spend a second longer with them than I absolutely need to. 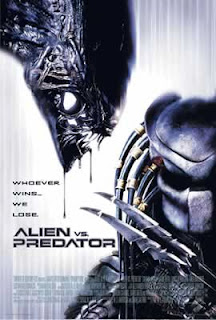 A group of explorers stumble into a buried pyramid in Antarctica that is also the site of an ancient battle between the predators and the Xenomorphs.

It’s such a miracle of licensing management that any crossover film ever gets made that I really want to like them. I really do. But Alien vs. Predator, no doubt sparked into life by the runaway success of Freddy vs. Jason, doesn’t even reach that film’s level of base mediocrity. To be fair, with mid-2000’s franchise horror it was either go torture or go home, so the sci-fi tinged property was already dead on the vine, but I’m not sure it’s physically possible to come up with a worse justification for the meeting of these two genre giants.

That being said, I also didn’t think this ludicrous mash-up could possibly be boring, but against all odds I continue to be wrong. Even when you add a shifting, labyrinth-esque puzzle box of a pyramid and some Thing throwback Antarctic mayhem, Alien vs. Predator can’t shake off the doldrums of tedium that wrack it to its very core.

This probably has a lot to do with what it has in common with Alien: Resurrection, namely a brobdingnagian slate of names cardboard soldiers that fail to be anchored by the presence of a stately character actor (in this case Lance Henriksen, who slums it for an appallingly large amount of time. But it also has to do with Paul W. S. Anderson’s royally clunky staging and liberal application of exhaustingly prolonged slomo. The Xenomorph effects were clearly limited, so it was difficult to frame an Alien and a Predator in the same shot without flop sweat, and the bleak grey color palette made it pretty much impossible to discern what was going on regardless.

AvP is a choppy, generic movie that just doesn’t seem to care one whit about either of its source materials. Plus, its convoluted mythology leans far too heavily on the side of the Predators that it’s impossible to view this as a clash between two equal, evil factions. Its wan action is buried under hideous clichés like the Academic Who Can read Dead Languages like the Back of a Cereal Box.

Fortunately, being a Paul W. S. Anderson movie does leave AvP with its fair share of ignoble popcorn flick charms. Every 15 minutes or so, it briefly perks up with a scene so mind-bogglingly stupid, you can’t help but admire and enjoy it. You won’t catch me complaining about the mid-glacier-climb phone call or the jump scare featuring a penguin, because they at least show a spark of life in the dead-eyed monstrosity. And [SPOILERS] I have little to no opinion on the Predator as a villain, so the controversial climax where our heroine befriends one of the hulking kill beasts brings me nothing but frothy delight. [END SPOILERS] 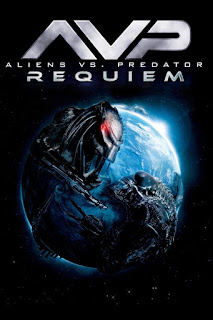 A Predator-Alien hybrid is let loose on a small Colorado town in British Columbia.

The films where acid-blooded moon beasts and technologically advanced dreadlock monsters duke it out just should not be boring! How does this keep happening? This movie whose name I refuse to type a second time and shall now refer to as AvPR isn’t spectacularly bad in any showy, immediately recognizable way. Instead it’s insidious, sinking into your bones like a rot.

It has a lot going for it. This is the first time the Xenomorphs have made contact with anything remotely resembling the real world (as Dawson’s Creek-y as the human cast gets, it’s set in a recognizable modern American town). The franchise has returned to its R-rating, doling out gross deaths by the bucketful. And there are even a couple tidbits about civilian life in post-9/11 Patriot Act America, if you look hard enough.

But between its hopelessly tangled laundry list of characters (this is basically a Garry Marshall movie with Chestbursters) and unrelenting nastiness, AvPR is just unpleasant to spend time with. People live and it’s hard to care about their unexplored personalities. People die and it’s pointlessly brutal. A Predator and a Xenomorph have a tussle in the street while the camera swoops gracefully past a huge Papa John’s sign a couple dozen times. It’s just crude.

And the worst crime of all is that it wastes cinematographer Daniel Pearl, by far the most experienced person on set including the two directors and every member of the overpopulated cast. While Pearl attempts to create the slick, mottled look he crafted in Texas Chainsaw and Friday the 13th that was inescapable in the 2000’s, it’s clear he was given no more than two lights to work with, leading the entirely film to be clouded by a murky gray fog.

It’s a dreary, dilapidated mess that had no reason to exist in the first place, and it hardly justifies itself with its leaden action sequences, dull pacing, and complete lack of interest in anything slapped onscreen. If Alien vs. Predator was one to miss, AvPR is one to hit… with a flaming arrow that launches it into oblivion, so you never have to think about it again.