Popcorn Kernels: The Vampire Strikes Back

Please enjoy this savory sampling of mini-reviews from the second half of Scream 101’s vampire month.

Fright Night (For our Scream 101 episode about this film, click here.) 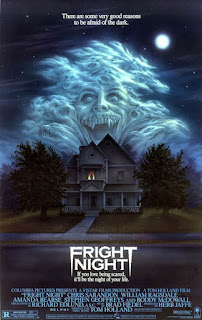 A teen boy begins to suspect that his new next-door neighbor might be a vampire.

I’ve had a pretty bad run of luck when it comes to visiting classic vampire flicks I’ve never seen before. Sometimes a lack of nostalgia can be devastating, which seems to be the case whenever I watch Tom Holland movies. Just like Child’s Play before it, I found Fright Night terribly underwhelming. Although it has many of the 80’s horror trappings I’ve come to appreciate in a movie, it just lacks a certain oomph that would keep me invested.

The trouble is, I really get what it’s doing. Fright Night transplants gothic horror into modern suburbia, as literally represented by vampire neighbor Jerry Dandridge’s spooky giant mansion nestled between all the cozy two-story homes. It’s attempting to resurrect a legendary monster for the youth of today. Well, back when “today” meant 1985. But the execution stakes that concept in the heart.

Everything about Fright Night is inconsistent, from the acting (Stephen Geoffrey’s Evil Ed is a shrill, cartoonishly broad abomination) to the pacing (the  film lulls about every 20 minutes – it’s like a built-in naptime) to the rules governing what exactly its monsters can do (nothing is more frustrating than Dandridge’s live-in, totally-not-gay handyman, who can run around in direct sunlight unmolested, but is later revealed to be impervious to bullet wounds and weak against stakes to the heart – is he halfway through a vampire correspondence course or what?). And every scene lasts about three minutes longer than it should. This must be one of Paul Feig’s favorite movies.

The only instance where the execution is actually stronger than the concept is the special effects. When they come into play (and they take astoundingly long for a movie of his vintage,), they’re undoubtedly terrific, thanks to the work of I, Madman’s Randall William Cook. But they arise inorganically from the story, rarely if ever making sense in context. Fright Night stops dead in its tracks for these elongated sequences without seeming to realize that they belong to some other, better film. Fright Night is enjoyable enough, but it’s too all-over-the-place to be coherent. I definitely don’t get the mass appeal of this one.

Vampyres (For our Scream 101 episode about this film, click here.) 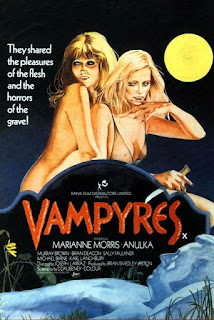 A pair of lesbian vampires lure men to their secluded castle, seduce them, and drink their blood.

One of the most influential subgenres in vampire cinema is the lesbian vampire movie, because horror films have almost always been made by men and men are almost always terrified of women. There was perhaps no better time for the genre than the 70’s, a time of women’s liberation and sexual awakening that was scaring buttoned-up menfolk out of their wits. Of course, when you’re dealing with a genre trafficking in softcore exploitation, the results are always one of two things: unintentionally hilarious or insufferably dull. Vampyres, the 1974 British entry in the genre, is emphatically the latter, British cinema being what it is.

What do you think of when you think of vampire films? Glistening fangs dripping in blood? Caped strangers turning into bats? Garlic and cross and silver, oh my? Well, you’re gonna get none of that in Vampyres, which I guess could be a refreshing take on the genre if it tried to tell any story whatsoever. Marianne Morris and Anulka, as our central couple seem to be acting according to their own private script. Perhaps it’s titled Real Housewives of Transylvania, because pretty much all they do is drink whine while they talk to or about men. And then they shower together sometimes. Y’know. Lesbian stuff.

Vampyres is trapped in an endless cycle of the two women walking to the road (every step is captured in hypnotic detail), flagging down men, having boring philosophical conversations, sleeping with them, and only occasionally killing them. While Vampyres utterly fails as a piece of erotica no thanks to its slipshod, handheld camerawork and acting flatter than the actresses’ resolutely fangless teeth), the centerpiece of its utter suckitude is its extreme lack of horror. The ladies barely exercise their vampiric nature (to the point that it could be argued that they merely think they’re vampires, á là George Romero’s Martin), and when they do the violence is all reactionary. There are no fangs piercing flesh, just two busty women licking blood off a previously injured man like he’s a Thriftee cone.

The tedium in Vampyres is scorching, and the lack of any decent sex or violence renders it literally and figuratively toothless. It fails to provide a single reason for it to exist, and it takes after its characters by completely lacking any semblance of inner life. In the film, vampires Fran’s life goal is to search for interesting people. I have a similar goal, to search for interesting movies. My advice? Look far, far away from Vampyres.