In which a weekend of classic film viewing is deconstructed with a set of mini reviews. 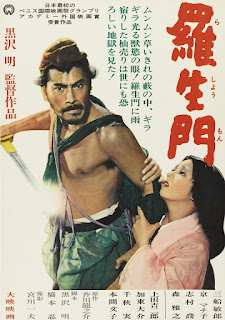 The murder of a samurai is depicted through the wildly varied perspectives of four witnesses.

I was very excited to watch Rashômon. As a film school graduate, I’m always happy to fill in the gaps of my classic cinema education, and this was an egregious one. Before Rashômon, I had ever seen a film by celebrated Japanese director Akira Kurosawa. Now that I have seen one… Either I made the wrong choice or I’m just not a fan of Kurosawa.

Now, I understand what Rashômon is doing. It’s a parable on the truth, and how we all experience reality from different perspectives that we may ever be able to synthesize into one coherent fact. As I digested the film, I began to develop an appreciation for how this idea was presented (in the trial during which the 3 perspectives on the story were told, we never see the judge The witnesses speak directly to the camera because we, the audience, are meant to be the ultimate judge). It is and will always be an interesting message, but that doesn’t mean it’s an interesting film.

It can’t help its profoundly boxy aspect ratio, but its capacity to be cinematic is severely stunted, warding off the delicate imagery that Kurosawa is reportedly known for. It also can’t help the tenets and morals of feudal Japan, the time period in which this story takes place. However, the systematic sexism with which the film treats its sole female character is deplorable, and the fact the she is either punished for being raped or submits wholeheartedly to her attacker makes me want to scrub my skin with steel wool.

I understand that, as a modern critic, these complaints lack the context of Japanese culture and film technology in 1950 and as such are somewhat invalid. But you know what isn’t invalid? Rashômon is kind of a snoozefest. We’re treated to a stroll through the woods that lasts what feels like a half hour, and the endlessly repeated stories might differ wildly in the details, but the follow the same, plodding, over-formal structure, endlessly repeating it into oblivion.

Again, I recognize the qualities that helped make Rashômon a respected classic. Some of the stylized imagery is dazzling (a half-destroyed temple and the clawed hands of a murdered man stand out particularly) and a scene of a medium channeling the victim’s spirit to get is testimony is certainly disconcerting. I also love Toshiro Mifune’s acting choice to five his criminal a tic of rubbing his neck to imply that he is flea-bitten and mangy. However, the presentation is stultifying, constantly shifting back and forth between three superfluous layers of storytelling and constantly recycling itself, unspooling more and more officious narrative rigidity as it goes along. 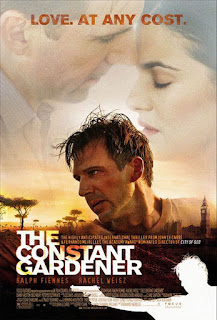 A timid diplomat uncovers a vast conspiracy that links the British government to illegal African drug testing while investigating his wife’s murder.

Good thing it’s chic to disapprove of Oscar nominations now, because otherwise I think this blog might get me lynched. Let’s throw more kindling on that rage fire, shall we? The Constant Gardener, sitting pretty at four nominations and one win, is a monumentally obnoxious motion picture. It doesn’t reflect well on film critics to toss around dismissive, subjective words like “pretentious,” but The Constant Gardener is a film that strains very hard to impress its audience with visual acrobatics rather than actually compelling content.

It’s an arid, emotionally vacant film that underplays each and every beat of an interesting if not action-packed storyline in favor of a wholly disingenuous third world misery porn scenario. Every single aching moment of this didactic white guilt extravaganza grinds your face into its Important Message, liberally slathering the frame with overexposed whites to remind you that this is Art. It’s so insecure that it feels the need to restate its themes in a mortifyingly on-the-nose wrap-up speech, actively defying its misguided impulse to tell its story in non-chronological order, filling in details only on a need to know basis.

Of course, by this point the film is already hopelessly muddled. I’d say The Constant Gardener loses track of its own storyline about once every twenty minutes, requiring it to send us through another kaleidoscopic barrage of weak metaphors before it gets back on tis feet. But enough complaining. There are enough annoying arthouse films out there to fill an encyclopedia, and this is hardly the worst of them.

There are several points where The Constant Gardener does actually succeed. It manages to pull the rug out from under you several times during Fiennes’ investigation, although it never manages to convince you these characters are worth caring about. And during the third act, there are some excellent visual representations of all-consuming paranoia, especially during a scene with a motorcycle in Germany. The Constant Gardener might be a haphazard affair, yet it does have at least a dollop of verve. But it’s not the sharp political thriller it thinks it is. It’s a self-consciously artsy film that strives for aesthetic greatness but mostly just ends up cutting off Ralph Fiennes at the hairline. 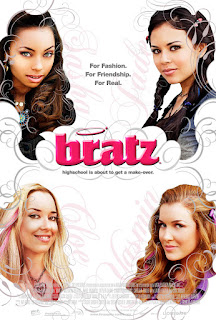 The Bratz must maintain their friendship despite a clique-obsessed class president’s attempts to separate them.

What makes any movie a masterpiece can vary wildly across cultures, mindsets, and time periods. Critics hated The Shining when it came out, but now it’s hailed as a classic film. Ditto Citizen Kane. Ditto John Carpenter’s The Thing. No film is set in stone. So, keeping that in mind, please allow me to submit Bratz: The Movie as a bona fide masterpiece of world cinema. A stakes-lite wish-fulfillment teen movie based on a popular line of skanky dolls, Bratz might not be an obvious candidate for this title, but let me assure you. In terms of pure, unintentionally comedic, hyper-earnest, mind-boggling insanity, no movie even comes close to Bratz. The film is a glittering absurdist prank against art that challenges everything we know about the craft of cinema.

You don’t watch Bratz. You experience it. It’s a pastiche of high school movies that tosses every established tenet of narrative filmmaking out the window, so there is literally no way to predict what may be coming around the corner. This makes Bratz a careening adventure through a vision of human life as interpreted by an outsider. I don’t know whether the film was made by Martians or just people who had never interacted with teens, Hispanics, principals, cheerleaders, nerds, or girls before, but it presents a fascinating, demented way to view the world.

This is a universe where Hispanic households have mariachi bands practicing in their living room. Where high school bears prison-like signs reading “OBEY,” “SUBMIT,” and “NO LITTERING.” Where that same high school has a principal who 1) receives a grotesquely enormous salary, and 2) is played by Jon Voight. I could go on and on, and in fact my notes on this movie last a good five pages, but I’ll be brief.

Bratz is obviously not a good movie. The four Bratz are defined only by their race, and the de facto protagonist – Hispanic Brat Yasmin – is by far the weakest performer. Also, Bratz strains to convince us she can sing despite clear evidence to the contrary. But the movie shifts gears as often as its soundtrack (which contains, by my count, 29 distinct songs, from sub-Simple Plan moperock to straight-up opera, and that’s a rate of one song at least every four minutes), lending the film a whirlwind pace to the effect that you never spend too much down time with the Bratz. It’s difficult to hate them, because they’re always sprinting on to the next cotton candy coated activity, whether it be an alarmingly violent food fight or a rundown of school cliques that includes – mysteriously – “disco dorks” and a set of mimes.

At every turn, Bratz so eagerly defies logic with random cutaways, inscrutable production design choices, and over-the-top teen mayhem that it overrides the system, something that only the very best bad movies can do. I’m forced by my formula to assign a numerical score to this film, but I urge you to ignore it and seek out Bratz, even if you must go to the ends of the Earth to find a copy.