This set of mini reviews will cover a multitude of films I’ve seen recently about women who are under the weather, whether it’s a contagious bug, a nervous breakdown, or a psychological corkscrew. 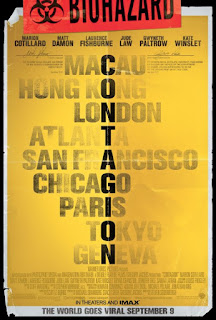 A lethal viral pathogen is quickly spreading across the world and authorities scramble to find its source, discover a cure, and decide who to save first.

There’s no single more effective moment in Contagion than its opening shot: A pale Gwyneth Paltrow coughs and sniffles in an airport lounge. The title card “Day 2” appears in ominous, blood red font. This is not the beginning of our story. We don’t know how or why, but it has already begun and there is no escape until it reaches its inevitable conclusion. Now that's how you open a movie!

I’m an easy lay for viral outbreak movies. As a card-carrying germophobe, I had a knot in my stomach for nearly the entire duration of the movie. It freaked me out more than every horror movie I’ve watched this movie, combined. And while I appreciate any film that can generate a physical reaction in its audience, I am NOT an easy lay for positive reviews. And as tense as Contagion may be, it’s an astoundingly messy movie.

It’s telling that the film’s best moment is its opening shot, because once Contagion’s innumerable characters and subplots kick in, they weigh the film down like so many anchors. The broad, multi-perspective view of an epidemic is certainly an intriguing and tense approach, but the film’s overall structure suffers, narrative logistics cracking under the weight of a metric ton of stars. Contagion’s desperate attempts to weld together storylines involving Matt Damon, Kate Winslet, Laurence Fishburne, Marion Cotillard, Jude law, John Hawkes, Brian Cranston, and Elliott Gould lead to a waterlogged conclusion that haphazardly drops subplots to bail out a slowly sinking narrative. It’s the Garry Marshall’s Valentine’s Day of viral outbreak movies.

Contagion is a roller coaster; a rip-roaring thrill ride that leaves you entirely unchanged upon its completion, if a little nauseous. Its shallowness isn’t necessarily a fault, even if its relentlessly purple dialogue is (“should I call someone?” “Call everyone!”). It does have some shaky thematic throughlines about the indignities of the class system and how fear and rumor spreads just as quickly as disease, but for the most part it’s just a slick, by-the-numbers thriller. When it finally ends with a pointless explanation of the virus’s origin, it’s hard to feel like the movie has accomplished anything, but it was definitely a wild ride.

Pro-Tip: Contagion is patently NOT a date movie. Potential suitors, avoid at all costs. 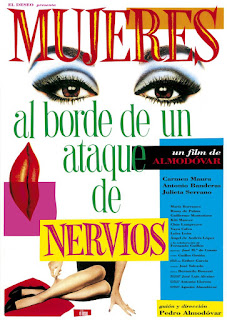 
An actress jilted by her co-star boyfriend tempts to deal with her break-up while a friend on the run from the law, her lover’s ex-wife, his son, and his son’s fiancée unexpectedly arrive at her apartment.

Sergio and I were so taken with Pedro Almodóvar’s Volver that we more or less instantly followed it up with Mujeres al Borde de un Ataque de Nervios/Women on the Verge of a Nervous Breakdown, a much earlier entry in his filmography that also stars the inimitable Carmen Maura (it was also the one that capsized their creative partnership, and in fact they wouldn’t work together at all until the 18-years-later Volver, but that’s neither here nor there, I suppose). Although it’s another female-led comedy with dark themes that allows its protagonist license to be venal and selfish, Mujeres could hardly be more different from Volver.

Where his 2006 effort is a confident, fantastical treatise on the beauty and wonder of life, Mujeres is an out-and-out farce of gran proportions, a wacky, door-slamming effort in the vein of classic stage works like Noises Off. There’s the obvious contributing factor that it mostly takes place in a single location once the second act kicks in, but it’s also a loony jaunt jam-packed with delightfully cartoonish characters. Once again, Almodóvar delivers an effervescent comedy that transcends language barriers with a solid undercurrent of emotion and artistry.

You see, the women in this film aren’t just on the verge of a nervous breakdown due to their over-the-top situations. They are real life women trying to get by in the face of life’s incalculable unfairness. Their struggles are palpable and their exaggerated reactions blameless. Essentially every problem they face is the result of men carelessly using them like playthings, and the entire arc of the film reflects main character Pepa’s growth into independent womanhood. Not only is it a passionate and exuberant feminist tract, it’s a god damn work of art.

There is perhaps no film scene of the entire year that matches the dreamy magnum opus of this film’s opening, played out through a retro film scene followed by Ivan – the man who caused all this trouble – providing dubbed Spanish dialogue for another movie. The eclectic collection of shots in the film within the film depict him declaring his undying love for a multitude of international women (including an American stereotype I can’t say I’ve ever come across – a baton-twirling cheerleader), followed by an outpouring of dubbed emotion over a muted film track, in which the woman silently flaps her lips in response to his declarations. It’s a genius setup that clearly implies how Ivan (and, by extent, the world) views and ignores women, as well as how trapped they find themselves by his words. It’s a powerful, beautiful piece, and it’s followed by 80 minutes of vivacious, neon farce.

It’s a stylized, wacky, sexy romp that turns a comic relief cabdriver (he’s a relief from the comedy because he’s marginally less funny than the other characters) into an exquisitely precise longform punchline. This film is women against the world, and they grab it by the horns, toss it through a plate glass window, and keep it laughing so hard it passes out. I’ve only seen two of his films so far, but Pedro Almodóvar is swiftly becoming one of my favorite directors. 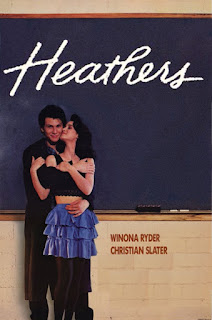 
A teen girl is seduced by a new boy in town, who convinces her to murder the popular kids at her high school.

I’ve always viewed Heathers as an alternative teen classic, a late period bit of counterprogramming to the overly earnest John Hughes cycle, but I personally hadn’t seen the film since the first time I watched it, at a very young age. Given distance and a new perspective, Heathers is much better and a hell of a lot worse than I thought. Its themes have only gotten more potent and many moments are unequivocally brilliant, bleeding-edge satire, but to get to them you have to sift through a heap of late 80’s detritus.

The first act is a gauntlet to prove that you’re worthy of the film’s brilliance; a cheap, stagey spectacle of overbaked dialogue that almost certainly made a young Diablo Cody swoon. It’s a vexing half hour of hip, snappy teens spouting avant garbage about spokes in their menstrual cycle, reigned over by a truly dreadful, soul-curdling non-performance from Kim Walker as the Queen Bee Heather Chandler. But once you’ve broken through that vexing permafrost, you hit pay dirt.

Heathers is a delicious dark comedy that could only have been made in 1989 – that sweet spot in the wake of the slasher boom but pre-Columbine – and its true core of pitch-black humor activates with Heather Chandler’s death, which also conveniently rids the cast of its weakest link. After this, the film snaps like a slingshot, launching into a wry satire detailing what happens when a vapid, venal student body that is used to violently lashing out more out of a sense of stir-craziness than righting actual wrongs comes into contact with a genuine, dyed-in-the-wool psychopath. This is a society where suicide (faked or otherwise) is the great equalizer, an alternapunk wasteland of superficial nihilists who will fake true emotion if it gets them on TV, where life only gains meaning once it’s extinguished.

It’s unspeakably grim, but also uproariously funny. Watching these teen movie archetypes marching through their stages of non-grief is a hilariously biting indictment of apathetic teen culture, balanced out by the earnest Winona Ryder resisting her seduction over to the Dark Side (represented by Christian Slater, copping Urkel’s nasal whine). She is the one point of light in this world of careless parents, thin-skinned teens, and inept cops, and her dance with the Devil has surprising emotional weight. Her turning point into genuine heroine for hope comes in the film’s most brilliantly twisted moment: a guilt-stricken Ryder burns her palm with the car’s cigarette lighter and Slater grabs her hand, not to comfort her, but to use it to light his cigarette.

This detachment fuels the entire film, giving it an edgy boost that overcomes its feeble first act and shoddy production design(although I do love the blue neon light used to denote nighttime and one shot of a chase scene through the misty woods is a warped, expressionistic marvel). Eventually this delves into a patently silly climax that I recognized as goofily inferior even when I was a kid, but for the bulk of its run time, Heathers is a sharp, dynamic, demented flick that’s totally worth ritual rewatching, a proto-Fight Club for the angsty teen set.