In this set of mini reviews, we explore the modern incarnation of the zombie genre that pumped adrenaline into a decade of horror.

28 Days Later (For our podcast episode about this film, click here.) 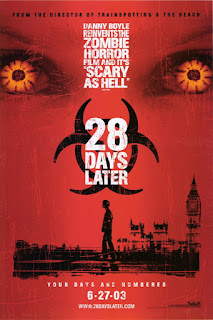 A bicycle courier wakes up from a coma, only to discover that London is completely deserted, devastated by a Rage Virus that turns humans into ravenous, bloodthirsty monsters.

Zombies as we know them have been around since Night of the Living Dead in 1968. They’ve been devouring humanity on the regular since that fateful day, but our current zombie boom (spearheaded by the ratings juggernaut The Walking Dead) can be traced back to one vicious epicenter: 28 Days Later. This massively influential flick changed the landscape of 2000’s filmmaking in an astonishing myriad of ways, introducing the world to Cillian Murphy, proving that theatrical films can be successful even when shot on digital video, and ushering in the slightly smaller but nerve-jangling subgenre of “fast zombie” movies that eventually spawned my favorite film, [REC].

We owe a lot to 28 Days Later, but the fervor it spawned shot off in a totally different direction, so it still stands alone as an idiosyncratic littler indie without too many copycats dragging it down. That’s something very unique, but then again 28 Days Later is a particularly special movie. With a budget approximately the allure of the Avengers 2 snack table, it crafts an elegantly simple, paralyzingly terrifying premise, which is a testament to the fact that it was shot by an actual film director (Danny Boyle would later helm Slumdog Millionaire and Steve Jobs, but even before 28 Days Later he had Trainspotting and A Life Less Ordinary) rather than an amateur thinking they can strike gold with a cheapo shocker.

Danny Boyle crafts his scares with great patience, allowing his audience time to breathe, giving the scope of the devastation time to sink in before he pounces, plunging his characters into hot water without a moment’s warning. In his world, you are never safe, and this structure invokes a constant paranoia, even (perhaps especially) during the film’s surprisingly frequent comic relief interludes. The fact that 28 Days Later’s fear is so fiercely politicized (included among the angry grab bag of subtext is an indictment of animal testing, blind activism, sexual aggression, human pettiness, and the military industrial complex – no wonder this flick is nearly two hours long) just makes its undercurrent of rage – the source of every danger in this film – that much more potent.

There’s just one thing that bothers me about 28 Days Later… The film is powerful ugly. It was shot on digital video, which opened up all sorts of avenues for easily obtaining iconic images, especially in the scenes taking place on deserted city streets. This is all fine and dandy, but the unfortunate side effect of the format is that everything looks like a 90’s grunge music video, all overblown colors and Vaseline-smeared lenses. A lot of the handheld, vérité aesthetic is intentional, but when compounded with the low quality camera (which is usually something I never mind much), it’s an immensely frustrating visual schema. However, I suppose that being brutalized by the aesthetic pitches you even further into the film’s deranged terror. Well played, 28 Days Later. 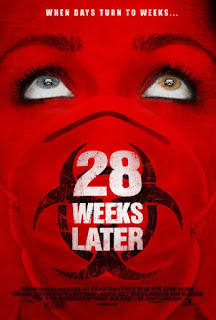 Virus-devastated England is being rebuilt by the American military, but when the rage virus outbreak begins once more, a defected doctor and sniper must protect two children who potentially hold the key to finding a cure.

28 Weeks Later is the Aliens to 28 Days Later’s Alien. Where the original was a methodical, chilling nightmare, the sequel gnaws the cap off a syringe of pure adrenaline and jams it right the hell into your eyes. And just like with Aliens, it’s a Sisyphean task to even attempt to decide which film is better, because they’re both great in almost totally opposite ways.

While there’s still an angry political element to the film, rotating the vices of the military system front and center, 28 Weeks Later is more of a rapid-fire family drama about a Bad Dad hall of famer who abandons his wife to the rage zombies, destroying his family from the inside out, and then pretty literally destroying them from the outside when he becomes the next Patient Zero. The last vestige of humanity within him converts his guilt into pure rage, sending him after his own children like a bloodhound. As if you couldn’t extrapolate from that, this is a remarkably dangerous movie, a wicked, brutal extravaganza of blood and pain.

This is elegantly reflected in a seemingly innocuous Act One scene where a group of snipers spy on the citizens of the safe zone through their scopes. They may be laughing and joking about what they see, but the message is disturbingly clear: Every single living person is in the crosshairs of 28 Weeks Later. Violence is coming and it has no mercy. This atmosphere makes it a spectacularly effective action-horror film, if not a universally palatable one.

The one area where 28 Weeks Later is a marked improvement on the original is its aesthetic, which isn’t so bodaciously ugly. The quick-cutting handheld aesthetic is resurrected for the zombie scenes, but when it has a confident, appealing aesthetic to juxtapose against, it makes it so much more effective. Director Juan Carlos Fresnadillo crafts his film impeccably, making moments like the stunning visual metaphor in the aforementioned sniper scene possible, and capturing the forlorn emptiness of London with a keen attention to detail that grinds the dreary mood into every fold and crevasse of your mind.

It helps that 28 Weeks Later had a significantly higher budget and more developed CGI technology to fill in the cracks, but a well-shot movie is a well-shot movie. Let’s not blame the dollar bills. Now to even things out, let’s broach 28 Weeks Later’s biggest flaw. The film spends much more time world building than its predecessor, allowing us to explore a zombie-free London for quite some time, all this occurring after a significantly long opening scene (a terrifying affair, to be certain, but one that also eats up a good chunk of the run time). As much as I appreciate both these sequences, 28 Weeks Later is already a full ten minutes shorter than Days, so when the main plot finally kicks in, it’s a rather truncated affair that feels like it ends before it can even begin.

It’s not often that you’ll hear me begging for a longer movie, but it’s not often that a horror sequel assembles a stellar cast (including future stars Rose Byrne, Jeremy Renner, Imogen Poots, and even Idris Elba) for a bloodthirsty, challenging, incredibly sharp horror affair. 28 Weeks Later earned those extra ten minutes, but even dismayingly abrupt as it is, it’s an indelible film and an eternal beacon to the cause of proving that sequels can be genuinely terrific.