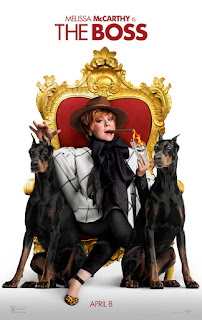 Melissa McCarthy is the most important force in modern cinema. OK, maybe that was a wee bit of “this review needs a hook” exaggeration, but she’s certainly in the Top 10. As a cultural figure, she is proving that a woman can lead and, more importantly, succeed in a vulgar film comedy. This might seem like a trivial thing to attach so much importance to, but it’s far from it. She’s opening up a dialogue about women in cinema, sexual agency, and body image, and the best thing is that she’s a genuinely  funny performer. 2015’s Spy may have been the first film to truly get her as a lead, but her continued success speaks volumes.

Of course, every major cinematic icon has their follies. Marlon Brando had The Island of Dr. Moreau. Al Pacino was in Gigli. Robert De Niro perpetrated Dirty Grandpa upon the world. Not to put too fine a point on it, but there’s a reason this discussion is cropping up at the beginning of a review for The Boss. I would scarcely say that the film is as egregious a misstep as the cinematic bile that is Dirty Grandpa, but – you know what? Let’s pick this up in a second. Time to hit the plot. 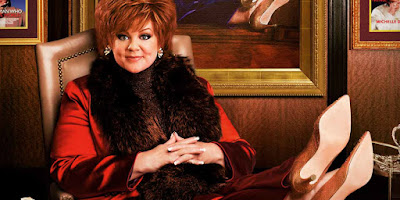 In The Boss, Michelle Darnell (Melissa McCarthy) is a grotesquely wealthy woman who doesn’t respect her hardworking assistant Claire (Kristen Bell). Her life gets a bit of the old switcheroo when her ex-lover/business rival Reynault (Peter Dinklage) exposes her for insider trading, sending her to jail and stripping her assets. She is reluctantly taken in by Claire and her daughter Rachel (Ella Anderson), but on a visit to Rachel’s to Totally Not Girl Scouts meeting she gets an idea. With Claire’s help she creates Darnell’s Darlings, a troupe of young women who sell brownies. And thus begins the epic journey of a rich lady gettin’ rich again. 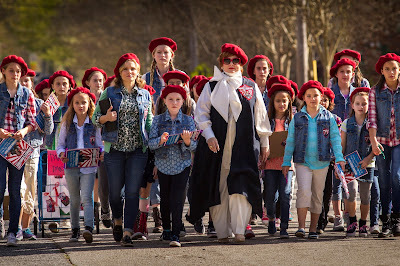 But will she be rich with money or… (drumroll) friendship?

The thing about The Boss is that it’s not terrible, especially not to the degree that critics have been implying. It’s merely generic, which can be just as damning. Here, your average Melissa McCarthy profanity is grafted onto the most sundry family comedy plot imaginable the point that it’s pretty much for no one. It’s too vulgar for the kids who can sit through this kind of plot on the regular and it’s too toothless and predictable for the over 17 crowd. Take out all the F-bombs and sex jokes and you’ve got yourself a Hilary Duff vehicle.

However, I do respect The Boss for being the second McCarthy film in a row that doesn’t mock her weight of integrate it into her character. In fact, she’s playing a highly successful and fashionable woman, which is light years ahead of her previous filmography. Although Michelle Darnell has a predilection for turtlenecks so awful they provide strong evidence for the necessity of capitol punishment, she is a character worthy of Melissa McCarthy, though she’s not in a film that can really support her. 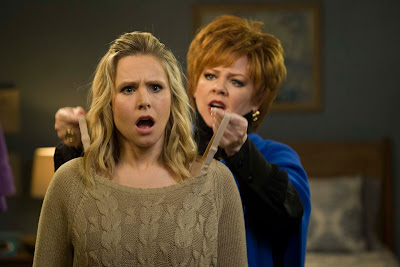 If Ghostbusters doesn’t prove to be the best McCarthy film this year, something will have gone terribly wrong.

For what it is, The Boss is totally fine. While the plot plods along the path everybody knew it would set on from the first frame, the comedy – always a subjective affair – does a decent job of keeping audiences occupied. We get a bit of the old fish out of water gambit, mocking the cluelessness of the rich (Occupy Hollywood!), and some classic “let’s dump the hot blonde in a chunky sweater and call her unattractive!” The best material comes from Tyler Labine, the James Corden-esque love interest for Kristen Bell who brings a much-needed dose of warm, earnest comedy in a register that is actually a little unexpected. For once.

The only comedic element that well and truly rankles is the physical comedy, which follows the recent trend of upsettingly punishing slapstick. Good physical comedy, like The Three Stooges, works well because it exists in a heightened cartoon reality here the characters aren’t actually in physical danger. The Boss is not a prime example of good physical comedy. A little girl fight scene almost gets there, because the filmmakers knew they needed to tiptoe around that one, but Ms. Darnell is run through the wringer, slammed into walls and down concrete stairs with deadly force, the sound design doubling down on sickening thuds and crunches. They’re more like UFC fights than gags, which totally undermines any potential laughs whatsoever.

So much of The Boss is a swing and a miss (an aborted Kathy Bates cameo literally has her abruptly exiting a scene on a galloping horse, there’s a full rap performance, and the climax is a hypercolor nightmare of violent nonsense), but the same genericness that keeps it from being truly great likewise prevents it from totally sucking. It’s a buffer of blandness.

While I should pan The Boss for a woeful misrepresentation of The Texas Chain Saw Massacre as a gory movie, cutting between two scenes 45 minutes apart like I wouldn’t f**king notice, there’s enough good here to earn a qualified positive score. Labine is excellent and hopefully this film allows him to reach a wider audience, Ella Anderson is one of the better child actors in recent memory, and the easy emotional beats are far from taxing. If you’re looking for an unstressful time at the movies, you’ve come to the right place. Otherwise, maybe don’t bother with this one.

TL;DR: The Boss is a defanged Melissa McCarthy vehicle that doesn’t really have a place with any audience.
Rating: 6/10
Word Count: 977
Also sprach Brennan at 8:44 AM