Disneython: Whistle While You Work 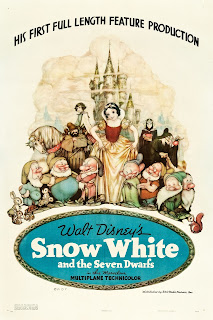 So, knowing my penchant for totally following through on marathons and finishing them 100% on time, Sergio and I have decided to embark on a chronological expedition through the Walt Disney animated feature films canon, which currently numbers 54 and will certainly have risen before we get even close to finishing. As you can imagine, this will probably be a typically sporadic and unevenly paced marathon, especially when we arrive in the black holes of the Disney filmography that include flicks like Saludos Amigos or Oliver & Company.

However, I am excited for Popcorn Culture to explore realms that aren’t full of blood and guts, though sometimes they’re no less terrifying. Now, I’ve already reviewed three films in the canon (Frozen, Big Hero 6, and Zootopia) so that lightens the load somewhat, though I may attempt to revisit them by the time we reach that end of the marathon. But that’s business for another time.

Today we’re visiting the film that started it all, and by “all” I mean “literally everything we know about feature animation today”: Snow White and the Seven Dwarfs. 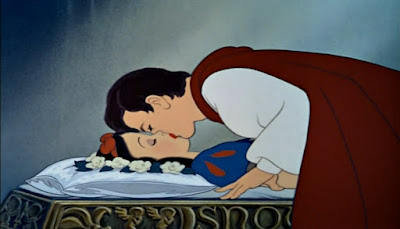 You’ve probably never heard of it.

On top of being the first American feature length animated film ever, being one of the most successful films in the Depression’s stunted economy, and altering the craft of animation forever, Snow White is a very important film for the Disney company itself. Not only was it their first film to be based on a well-known fairy tale, completely obliterating any popular knowledge of the original version, but it was also the first Disney film to center on a princess. There was no way to know how important this factor would be for the Disney filmography, and in fact it wouldn’t be known for over a decade, but the Princess would soon come to dominate Disney animation for better, for worse, and forever.

So what of that landmark princess? As if you didn’t know, Snow White (Adriana Caselotti) is the fairest maid in all the land, a fact which ignites the jealous fury of the Evil Queen (Lucille La Verne). The Queen hires a Hunstsman (Chris Hemsworth Stuart Buchanan) to murder Snow White, but he gets cold feet upon witnessing her purity and urges her to run away into the woods. There she finds a hut inhabited by seven dwarfs, where she is allowed to stay in exchange for cooking and cleaning and forehead kisses.

When the Queen discovers this, she disguises herself as an Old Hag (Disney was never a particularly progressive company, let’s get that out of the way right now) and feeds her a poison apple, sending Snow White into a sleep of death, from which what dreams may come must give us pause. The only cure is Love’s First Kiss, so it’s a good thing she didn’t ho it up with that charming Prince she met back in Act One. Incidentally, the phrase “True Love’s Kiss” is never uttered in Snow White, leaving at least one shred of Disney iconography for a later film. 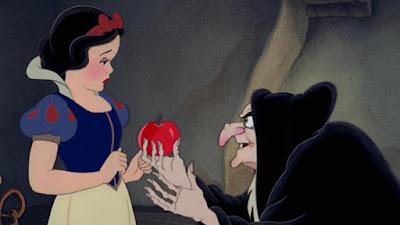 Although Snow White seemed to already have a grip on pretty much everything that defined Disney animation, it’s still the first of its kind and as such has its share of rough patches. First off, it has a child’s attention span, never spending more than a minute on any major plot point, yet taking obscenely long detours for such consequential scenes as “the Dwarves wash their hands” or “post-dinner hoedown.” The pacing is sloppy at best and the deus ex machina in the climax would make even J. K. Rowling blush.

Plus, although their costumes are iconic even to this day (for good reason), the designs of the two primary human characters are undeniably crude. While the company had a handle on anthropomorphic animals and fantasy creatures, creating something meant to resemble a human being posed a bit of a problem for them, giving us a slightly drunk-looking cherub of a princess and a drag queen monarch with a rictus grin. 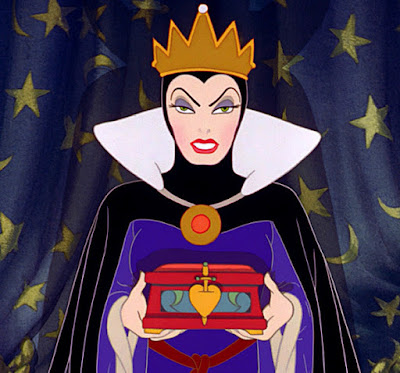 I half expect her to start lip syncing to “Dreamgirls.”

Nonetheless, despite its uncertain ground as a narrative piece, as a work of animation, it is utterly exquisite (with that one obvious exception). The Disney visual sensibility is acutely present here, with a relentless surge of playful, creative imagery that constantly prods the line between cartoon realism and Looney Tunes absurdist antics. Snow White stays firmly entrenched in a quasi-realistic fantasy mode, but the animated medium truly allows it to push the envelope to develop the tone of each scene, from the unmitigated spookiness of the vaguely humanoid dark forest to the subtle visual joking present in the interplay between the animals of the forest.

Snow White also pushed the envelope of exactly what could be achieved with hand-drawn animation, There is a constant array of shots of water, just to prove that they’re possible, whether it’s a splash, a bubble, or Snow White’s rippling reflection in a wishing well. The animators were constantly challenged to capture real-life physics and experiences, including a fluttering bed sheet that is downright gorgeous.

Overall, Snow White is slightly better as a trendsetter rather than an actual narrative film, but oh what a trendsetter it was. It’s a timeless, iconic piece of work that completely earns its massive, multi-generation defining legacy with a lighthearted, technical superb pizzazz.

Sergio's Corner: Well I assume that Brennan has clued you in on the sheer impact this one film had for the Walt Disney Company as well as the lives everyone born in western culture here thereafter. So without further ado I will include a brief synopsis of my thoughts on what was originally known as “Disney’s Folly”.

Snow White is Disney’s first princess and don’t let her lack of a chin in the original cartoons fool you, she is Disney royalty to be sure. With a voice of a Vargas girl and a body to match, Snow White really embodied the time period she was born out of. She was delicate, pristine, and willing to perform all household chores without the promise of matrimony--- now there’s a keeper. All joking aside, Disney’s first movie about his first princess isn’t really about Snow, no, it’s about the Dwarves… or little people. Though they don’t get top billing, Disney’s seven little men certainly get more screen time and (in the case of Grumpy) more character development than Snow ever did.

They make the movie come alive and help move it along more so than Snow ever could, seeing as how she only ever helps usher the plot by singing or cleaning. Though these seven little men are stunted by their descriptor, it makes them no less magical nor less memorable. They are proof that in Hollywood there are no small parts, only small actors, quite literally. They are also the reason that I rate this film as highly as I do because otherwise this film would dissipate into the vapidity that is Snow White’s character.

TL;DR: Snow White and the Seven Dwarfs is a masterful animated film that changed the game forever.
Rating: 7/10
Word Count: 1213
Also sprach Brennan at 9:24 AM