Is There A Word Yet For Old Friends Who've Just Met? 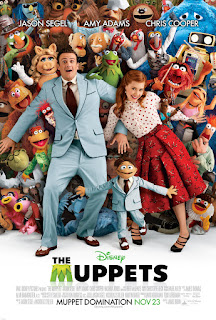 At last, it has come to this. Although the last film in the extant theatrical Muppet franchise is technically 2014’s Muppets Most Wanted, I reviewed that film when it first came out. So that leaves us with 2011’s The Muppets as the finale of this long-winded retrospective. Really, it couldn’t be more serendipitous. We’re finishing in the very place where my deep-seated love for the Muppets began.

The Muppets took such a hold on me that I saw it twice in the theater and even wrote a glowing review of it on an ancient, prehistoric blog that has long since washed away on the tides of the Internet. One boy who couldn’t care less about Jim Henson and his legacy walked into the theater, and out came a man with a heart made of felt. 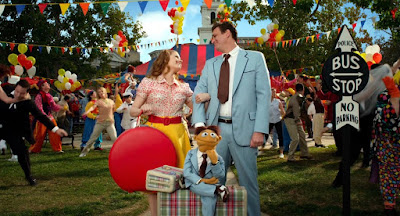 Thank you for taking this journey with me.

In The Muppets, Gary (Jason Segel) is happily dating Mary (Amy Adams), and they’re heading to the tropical paradise known as Los Angeles for their tenth anniversary. But there’s one small problem. One very small, ping-pong ball-eyed problem. His name is Walter (Peter Linz) and he’s Gary’s tagalong little brother/puppet. Mary is mildly perturbed that he will be joining them, but bears it with good, Amy Adams-esque grace. However, during a visit to the run-down Muppet Studios, thing get about as un-romantic as they could possibly be. Walter learns that wicked oil baron Tex Richman (Chris Cooper) is planning on razing the Muppet Studio and Theater to drill for oil unless the Muppets can raise enough money in one week to buy it back.

There’s only one way to do that, and it’s getting the gang back together. With the help of one Mr. The Frog (Steve Whitmire), they gather up the old crew, including Animal (Eric Jacobson, taking over for Frank Oz, who was finally broken by Muppets from Space), Gonzo (the steadfast Dave Goelz), Fozzie Bear (Eric Jacobson), and the reluctant Miss Piggy (Eric Jacobson , who seems to have made a pretty solid career move). The Muppets are unsure if they’re still relevant to modern audiences, but they give it the old college try (and they actually did go to college in Muppets Take Manhattan, so it works) and put on a show. 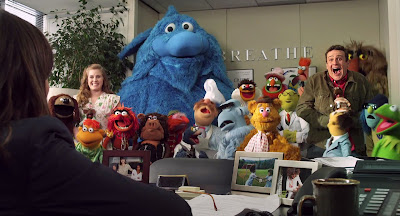 It’s time to get things started.

The Muppets operates primarily on nostalgia, much in the vein of the recent explosion of revival media: Arrested Development, The X-Files, Fuller House, Terminator: Genisys, Jurassic World… The list goes on and on, but The Muppets stands out for two reasons in particular. Primarily, it got here first. But it’s also one of the only films to use that nostalgia as more than a gimmick, weaving it into the very thematic structure of the film. The Muppets have always been particularly devoted to self-referentiality, so it’s no surprise that its structure is so well-integrated with its reason for being. But the only other recent film that even comes close to achieving that level of metatextual awareness is Star Wars: The Force Awakens, which is pretty explicitly about Star Wars fanboys/girls getting to have their own space adventure. And I think we can agree that, at least thematically speaking, it ain’t a patch on The Muppets.

Yes, there is a large part of The Muppets devoted to recreating and or fawning over classic moments from The Muppet Show and their previous theatrical features (Muppets from Space, tragically, does not get a shout-out), but it’s also about the act of nostalgia and whether or not the Good Ol’ Days can be resurrected in the cynical modern world. It takes a good hard look at the Muppet legacy, only using rose-colored glasses where Muppet Treasure Island is concerned. This oddly unfiltered scrutiny is married to a ludicrously cheery tone that should work but effortlessly, ineffably does. It’s just one more facet of the inestimable magic of the Muppets. 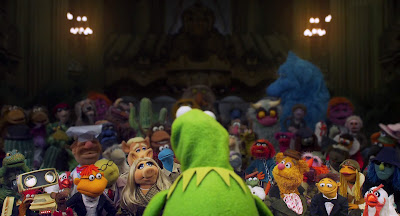 Even if The Muppets operates in large part as a nostalgia piece, it does have a charming, original story to tell. Gary, Mary, and Walter’s storyline is shoved roughly aside when the A-list Muppets are reunited, but their characters are painted in such broad strokes that they can withstand the hit. The blankness of their characters is not a liability because they act as the channel through which the audience gains exclusive front row seats to the “real live” Muppets. They perform a vital function, and they do it with grace and good cheer. Walter’s inherent blandness (and boy, is he ever the most boring Muppet ever cooked, all drab flesh tones with a limp flop of hair) would become an issue in Muppets Most Wanted, but in the context of this story, he’s an excellent bridge between the human and Muppet world, as this film more than any other seeks to explore that relationship.

By far the best original contribution to the film is its musical numbers, by Flight of the Conchords vet Bret McKenzie. Although Tex Richman’s rap is a little too 90’s for my taste, compositions like the deeply silly crooner “Man or Muppet” and the rousing opening number “Life’s a Happy Song” are tremendously satisfying. And Kermit’s solo number, the doleful, yearning “Pictures in My Head” is the single best Muppet performance since “I’m Going to Go Back There Someday” way back when in 1979. The music and its tone fit the Muppet ensemble perfectly – sprightly yet wistful; full of dreams, humanity, and list for life’s ups and downs.

Really, The Muppets is a perfectly imperfect evocation of the anarchist Muppet comedy credo. The pacing might be a smidge wonky, and the variety show performances have a tendency to lean toward the twee, but this is a welcome whirligig of meta movie humor, offbeat celebrity cameos, and a deep, abiding love for the world and the people in it, even the bad folks. It’s an excellent vehicle for the Muppet renaissance we’ve thankfully found ourselves in, a grand introduction for new fans, and a fond love letter to old ones. It’s the most consistent, wholly coherent and entertaining Muppet feature film ever released, and I thank it from the bottom of my heart for pulling our felt-covered friends smack dab into the middle of the pop culture conversation once more.