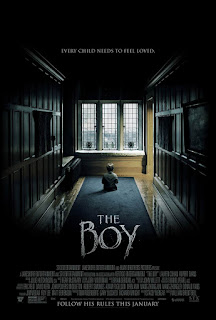 I was actually really excited to see The Boy, believe it or not. In hindsight, I should have been deterred by that January release date, but the trailer made the movie look too damn awesome to pass up. Trailers can be tricky that way. As it stands, The Boy can be added to the pile of killer doll movies that have some juice but don’t quite land. 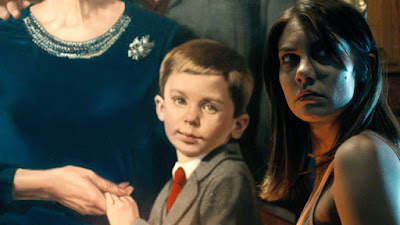 At least the stench of Annabelle is so overpowering that The Boy smells like primroses in comparison.

In The Boy, an American girl does what many American girls aspire to do and moves to Britain. This particular American girl is Greta Evans (played by British actress Lauren Cohan, because there’s nothing that directors love more than saddling performers with foreign accents on their home turf), a woman who is escaping a poisonous relationship by taking a job as a nanny for the Heelshires, a well-heeled couple who have a young son named Brahms. The only trouble is, Brahms is a porcelain doll. Following an unfortunate fire way back when in 1991 (man, we’re getting old), the grieving parents have kept this doll as a reminder of their lost son.

Greta takes the job, assuming that it’ll be a piece of cake because the couple seems to be a few apples short of a bushel. However, when the Heelshires leave her alone with Brahms for three months, she quickly realizes that their bushel is perhaps fuller than she anticipated. Sometimes the doll moves when she’s not looking, and a series of strange nocturnal events leave her rattled. Could the doll possibly be alive? Or is she just going crazy?

Is Mattel facing a hell of a recall?

First off, I must say that The Boy is extremely well photographed (and with The Texas Chain Saw Massacre’s Daniel Pearl behind the camera, it pretty much had to be). On its budget, it could hardly attempt any truly daring shots, but within the wheelhouse of standard supernatural horror, it has a palatably gothic atmosphere. Combined with the elegant severity of the production design, this makes for a very pretty package in which to present the film.

Unfortunately, the quality of the camerawork has very little to do with how good the script is, and The Boy’s script is by far its weakest element. Let us introduce into the discussion a certain doll. No, not our precious Brahms. I’m referring to a creepy clown doll nestled among his toys in his room, which receives a series of tender, loving close-ups throughout the film. There is absolutely no reason for this superfluous doll. We’ve already got one creepy doll on our hands, and unless we’ve got a Puppetmaster situation on our hands, we have very little reason to believe we should be concerned about this particular clown.

In fact, its very presence (an the fact that it’s actually introduced to the film first) undercuts the effectiveness of the main doll. I know creepy dolls are very common horror movie window dressing, but this inconsistency of vision is a real problem with The Boy.

Of course, most optometrists tend to flounder when your eyes are marbles, but that doesn’t mean you should never get your vision checked.

The Boy is inconsistent in plot, tone, and even pacing nearly every step of the way. A character revelation made halfway through provides an intriguing thematic well that is almost instantly ignored and the level to which Greta descends into madness varies wildly from scene to scene, and sometimes even from shot to shot.

In between these lurches and starts, The Boy’s thin screenplay is papered over with a nauseatingly endless litany of scenes in which characters hear something spooky and slowly turn around. With the sheer amount of low speed spinning that fills the screen, you’d think you were watching an amateur ballet rehearsal. Also, two scenes within twenty minutes of each other are fake-out dream sequences, a cinematic felony so egregious that I need to immediately change the subject so I don’t snap my keyboard in half in a fit of rage.

So, how about hat third act? It’s still nothing particularly special, but it presents an intriguing enough angle that it lifts the film partially out of its dreary doldrums. And I must say that the final shot is a particularly classy way to end a cheapozoid horror picture. Really, The Boy is nowhere near as abysmal as it could have been, though this could hardly be considered a recommendation.

Here’s what I’ll leave you with. The Boy is not an exceedingly egregious waste of your time if you want to take a horror-loving significant other/sibling/grandparent/pastor out for a treat. It’s much prettier than it needs to be, and it perks up after a generic but competent first hour. There should be enough there to slake your thirst for an entertaining diversion. Don’t expect derisive laughs, really don’t expect big screams, and just let it wash over you. If all else fails, imagine that it’s a harrowing documentary about a woman who’s in an abusive relationship with a doll. That’s what I did.

TL;DR: The Boy is an inconsistent blah that picks up during its last half hour.
Rating: 5/10
Word Count: 898
Also sprach Brennan at 1:13 PM