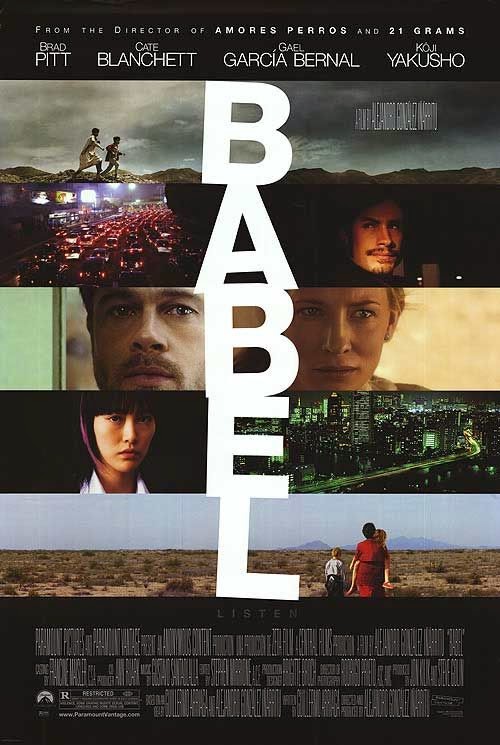 The story of the Tower of Babel goes as follows:


Once upon a time, everyone on Earth spoke the same language. Settlers in the land of Shinar sought to build a city with a tower reaching into the sky, so their people would never be separated. God looked out upon the construction and realized that there was nothing the people couldn't do if they worked together. He wasn't a big fan of that, so he cast a god spell on them, scattering the builders across the Earth and bestowing them with different languages so they couldn't understand one another or work together ever again. Google Translate having not been invented yet, the construction of the tower was halted and the city became known as Babel, which is now our word for an incomprehensible mash of language.

I have a theory that the production of the 2006 Best Picture-nominated film Babel went a little something like that story. It's a perplexing mash of loosely-connected storytelling, simultaneously thrumming with a conspicuously ham-fisted moral and a set of incomprehensible private musings of its own. Directed by Alejandro González Iñárritu (of this year's Best Picture, Birdman), Babel is a bewildering clutter, but it's not without its charms. 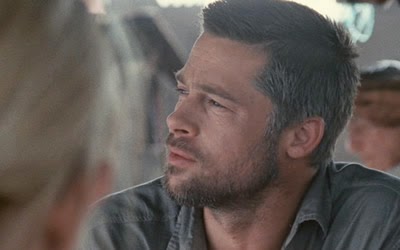 Sexy grey Brad Pitt is probably the least of its charms, so that's saying something.

The story of Babel goes as follows:


1) In Morocco, two young boys play with their father's gun, shooting it at passing cars. After they hit a tour bus an injure a woman inside, the corrupt local policemen pursue their family. And Brennan writes a strongly-worded letter to their parents.

2) In Morocco, unhappily married couple Richard (Brad Pitt) and Susan (Cate Blanchett) go on vacation in an attempt to move past the unfortunate death of their young son. After Susan is shot by a stray bullet through the window of their tour bus, they spend several days in a nearby town awaiting the arrival of the proper medical authorities. Susan spends pretty much the whole time lying on the floor unconscious. Surprisingly, Cate Blanchett does not win an Oscar for this role.

3) In America, Richard and Susan's kids are left to the care of their Mexican nanny Amelia (Adriana Barraza). When their trip is extended by an unfortunate bullet wound, she is forced to take them with her to her son's wedding down in Mexico. They spend a blissful day together, marred by a conflict with the immigration authorities on the way back home. George Bush is unharmed.

4) In Japan, deaf teen Chieko (Rinko Kikuchi of Pacific Rim) attempts a sexual awakening, but finds that very few older men are interested in her insatiable lust. This is before Instagram was invented, so you can understand her pain.

So what we get from all of this is... that Alejandro Iñárritu really likes Crash. In all seriousness though, Babel takes after its namesake: Each of the linked stories (The Japan story is dubiously connected to Morocco through Chieko's father) paints a larger picture, that of two different cultures combatting one another, causing issues through lack of compassion and understanding. Basically, it's the cinematic explanation for why we never built that damn tower. 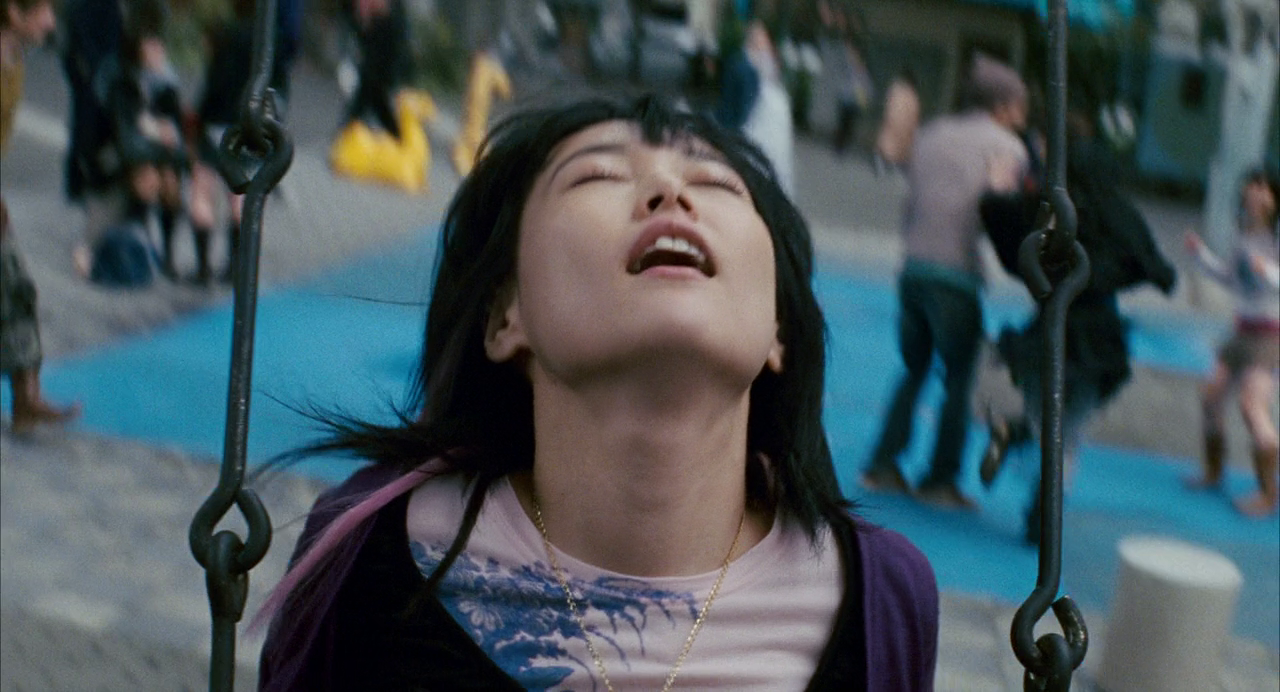 It's those teens with their swingsets and their premarital sex. Ruining it for us all.

The problem with the interconnected stories is that they intersect at such few and inconsistent points, it raises the question of why they felt the need to even try in the first place. Those first three stories go  together pretty strong, but the Japan angle is barely hanging on by a thread. In any other film, I'd say yank that plot out like a loose tooth, but unfortunately Chieko's story is one of the most interesting in the whole kaboodle.

Of all the culture clashes we see throughout the film, Chieko's is the only one that takes place within one umbrella culture. She and the people she struggles with are all Japanese, united under one language and set of traditions. However, her deafness creates a whole new subculture that bumps and grinds against her superculture. Chieko's story is by far the most intriguing to watch play out, second only to Amelia's, which has the most pathos thanks to the director's intimate understanding of the Mexican culture.

With the two strongest stories muscling for screentime in the wings, Babel keeps returning to damn Morocco, with poor Cate Blanchett lying wanly on her rug while Brad Pitt looks angsty and artily bedraggled. It's Oscarbait so pure and undiluted, it makes me a little sick to my stomach. 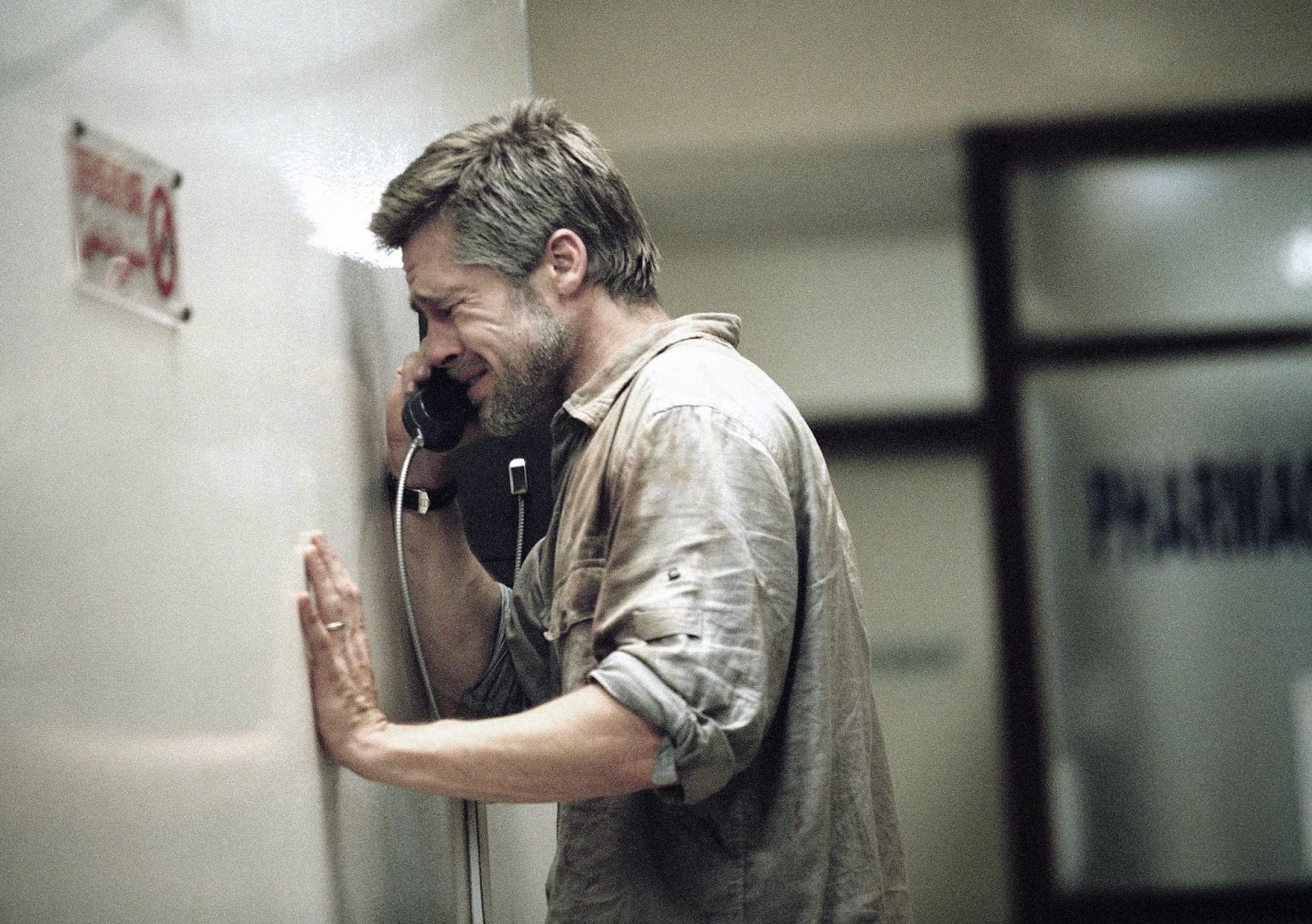 He's got the shakes. This must be his first time.

There are fantastic parts of Babel. Much of the sound design involved in painting Chieko's world, for instance, or the fleshed-out arc of Amelia's story that rips your heart to shreds. But the film as a whole is unfairly bogged down with an imbalanced focus on the least interesting facets of its narrative, its deliberate pacing, and its startlingly devoted propensity for handheld camerawork.

And don't even get me started on the plot twists that splatter out of the third act like the last of the whipped cream in the tube. They're almost amusingly banal, as if they had gotten M. Night Shyamalan's accountant brother to write them. I won't give anything away, but imagine that the ending of The Sixth Sense was "Bruce Willis was a doctor and his storyline took place five minutes before the other one." It's not a good look.

But really, Babel hits where it counts. I wish it were a little more focused, or maybe that Amelia and Chieko got films of their own instead of being forced to fight to the death with the hyperbolically duller storylines. But all in all, it's not a waste of time. If you're looking to watch an Important movie, Babel will certainly have you covered. And at least you can comfort yourself with Brad Pitt's face while you ignore everything coming out of his mouth.

TL;DR: Babel is a decent prestige drama, but has an unfortunate predilection for its least interesting storylines.
Rating: 6/10
Word Count: 1049
Also sprach Brennan at 8:53 AM