Census Bloodbath: The Rage Of Aquarius 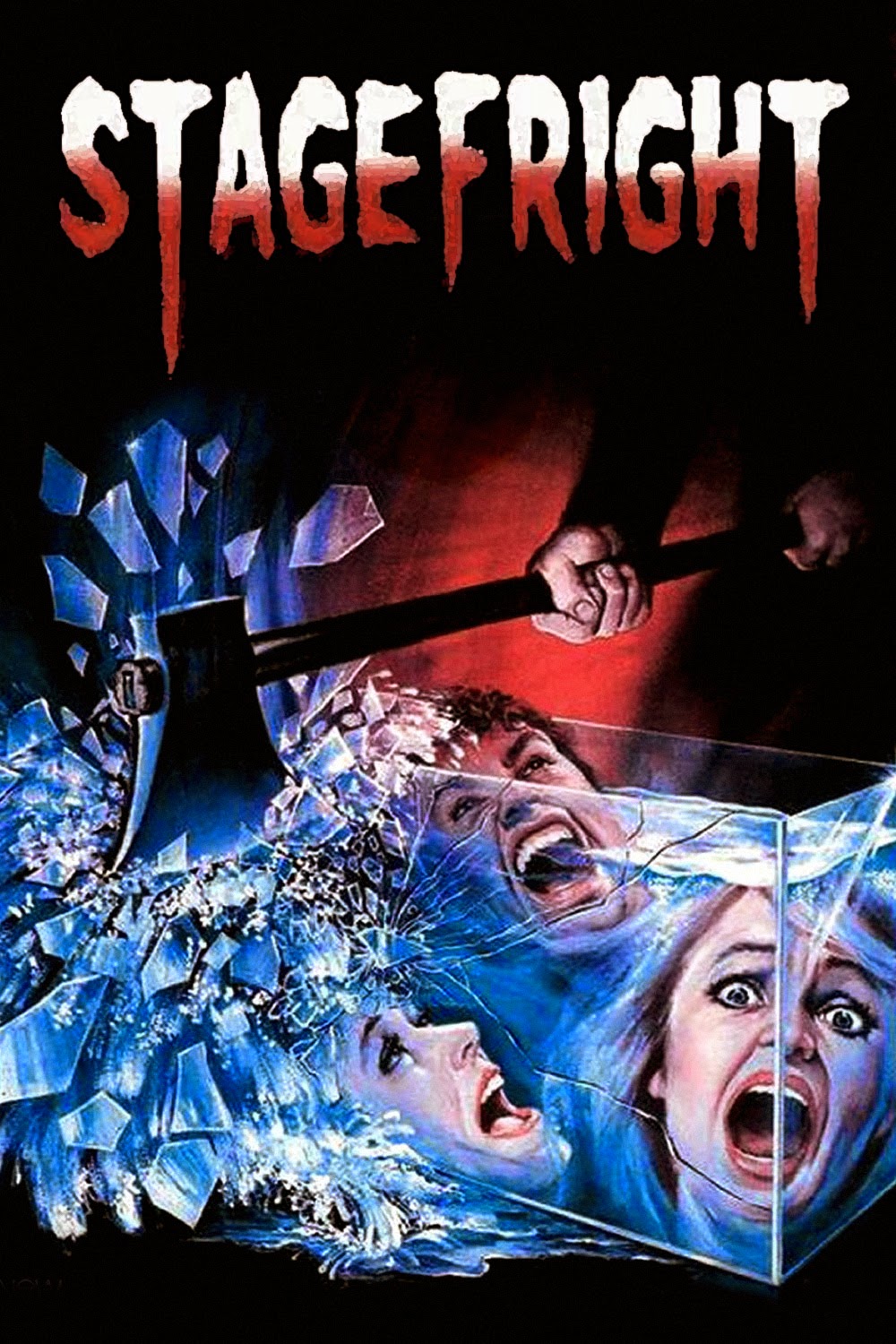 These are the tropes and traditions that come to mind when one thinks of a typical 80's horror flick. But in my unfortunately vast experience, the average slasher is nowhere near as fun, campy, sexy, or gory as the ones we picture in our heads. Many slashers are bland, tasteless affairs that are either gutted by the MPAA or left floundering by an inept filmmaker. Sure, there are plenty of tasteless, sleazy, gory masterpieces like Friday the 13th: The Final Chapter or The House on Sorority Row, but more often than not the micro-budget formula of slasher movies leads to a bunch of junky clunkers.

I do still tend to enjoy these lesser slasher films, but like a connoisseur of fine wines (or an overly devoted Katherine Heigl fan), I've developed a taste for them. So don't go thinking I'll abandon ship on Census Bloodbath. No way no how, this feature is my pride and joy. I'm just saying that this project involves a lot of long slogs through underlit, flavorless wafers to get to the good stuff. I want you to understand this. I want you to know the entire background of where I'm coming from so you'll listen good when I tell you that StageFright: Aquarius (aka Deliria) is one of the best damn slasher films I've ever seen.

It's a certainly flawed, utterly demented little beastie, but I'll be darned if I can find another late 80's slashfest that's such a dynamic, twisted joy to watch. 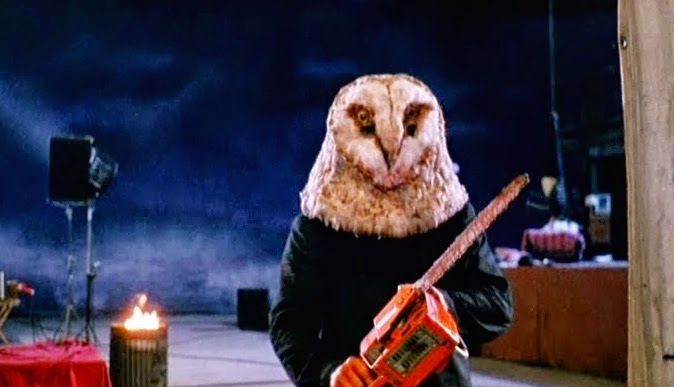 It's pretty much Birdman with a chainsaw, so it's technically the Best Best Picture.

StageFright hails from the hallowed grounds of Italy and is a product of some of the greatest horror minds of the era. First time director Michele Soavi had previously worked under giallo maestro Dario Argento for many years, producer Joe D'Amato was already notoriously prolific in the Italian horror/softcore business, and the script was even penned by George Eastman, who played the villainous cannibal in the astonishingly effective 1980 proto-slasher Anthropophagus.

But enough with that nerd garbage. Let's get to some slicin' and dicin'! StageFright: Aquarius takes place at a run-down American theater, where a troupe of out-of-work actors is putting together a terrible play described as an "intellectual musical" by its pompous director Peter (David Brandon). The play, which revolves around a series of murders perpetrated by a dancing man with an owl mask, comes to wicked life when an escaped lunatic named Irving Wallace (Clain Parker) sabotages their rehearsal and begins murdering the cast one by one while they're locked in for the night.

The play's cast forms some of the most interesting and varied Meat I've seen in my many years as a slasher historian. The characters are still painted in bloody broad brush strokes, but they capture the attention more than a generic slate of teen spam.

There's Alicia (Barbara Cupisti of Opera and The New York Ripper), a pleasant young woman with a sprained ankle who desperately needs the money this role can provide; Corinne (Loredana Parrella), the young ingenue who reads Stanislavsky, wildly overpreparing for a play where a ballet owl murders hookers; Laurel (Mary Sellers), the Designated Slut who will do anything for her own gain; Brett (Giovanni Lombardo Radice), the sassy gay friend that every theater kid remembers having in high school; Sybil (Jo Ann Smith), a feisty young woman who is encumbered with both an unwanted fetus and a feathered mullet - it's up to you to decide which is worse; and Danny (Robert Gligorov of Murder-Rock: Dancing Death, which is a real movie), Sybil's baby daddy and Sting's evil twin. 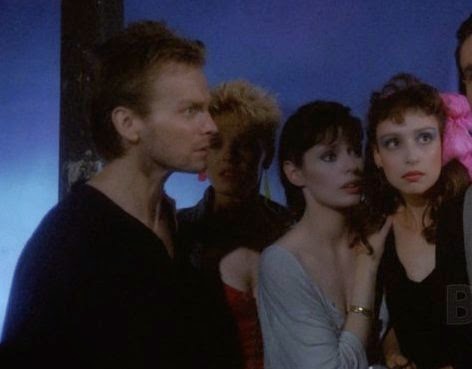 It's pretty easy to watch every breath Danny takes. He doesn't have many left.

As the quickly dwindling group makes their way around the darkened theater in an attempt to find either the key or an escape route, the film slowly reaches a boil, tossing out everything it's got in a rip-roaring climax of chaotic mayhem. The final act of this film is like a shot of pure adrenaline, propelling any fan of slasher panache or cinematic composition out of their seats with a rousing hurrah. OK, maybe I'm a little drunk on gore, this is my first slasher in a while. But it's great!

The best thing about StageFright is that it's full of surprises. Just when you think you have the film pegged, there's a new surrealistic shock around the corner. Whether it's an actress being stabbed to death in the middle of a scene after the killer is mistaken for her co-star, a high octane Die Hard-esque action sequence in the rafters, or an out-of-the-blue gore effect that matches nothing else that came before, the sense of "what the holy hell am I looking at?" rarely abates.

Although the actual construction of the special makeup effects are pretty standard fare, the filmmakers mix them up in creative and unique ways, manufacturing a lively and consistently engaging gorescape. 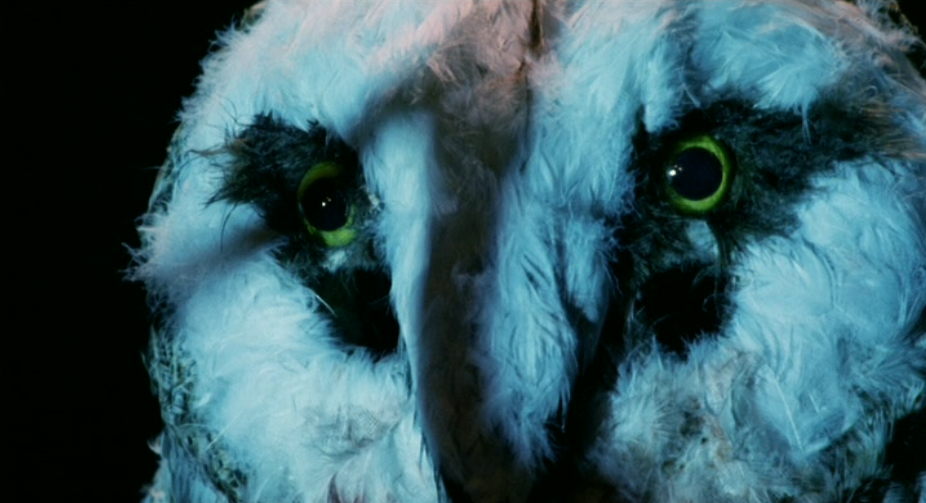 I bet when you clicked on this article, you were thinking "I hope he describes this film like he's on the Food Network." You're welcome.

On top of the thrills and spills, StageFright: Aquarius is imbued with the stylish brio that only the Italians could bring to the genre. Arranging a clash between stagebound theatrics and the gruesome reality intruding upon the players, scenes are arranged in messy tableaux of gore and pandemonium. Real blood drips onto spilled stage blood, merging with it beneath a burst of feathers that flit through the air like a blizzard. 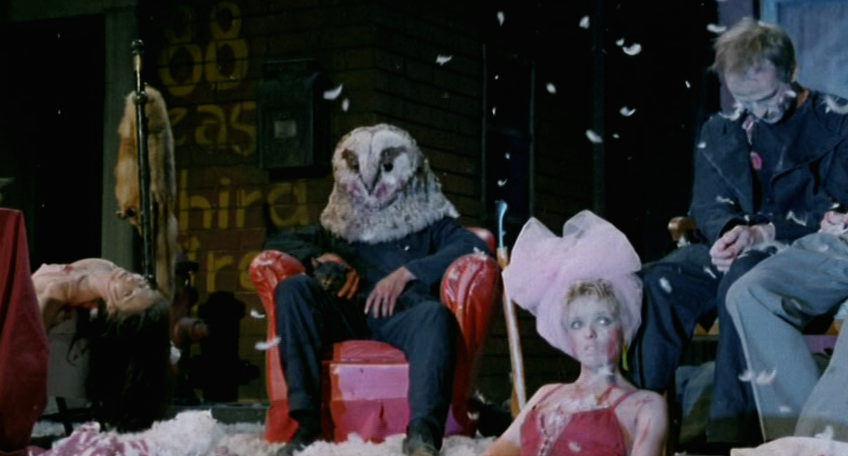 By the end, the set looks like the aftermath of a pillow fight at Andy Warhol's house.

The film slams the audience with jarring overhead shots, creepy mannequins, and extreme eyeball close-ups in a deliciously unpredictable rhythm. And all of this is interspersed with the lively banter of two cops who are obliviously standing watch outside. It's a real doozy.

It's been so long since I've sat through a film that's just so tremendously fun, so I highly recommend StageFright to any slasher fan, veteran or neophyte. Heck, I recommend it to any movie fan, as long as they can stomach some good 80's grue. 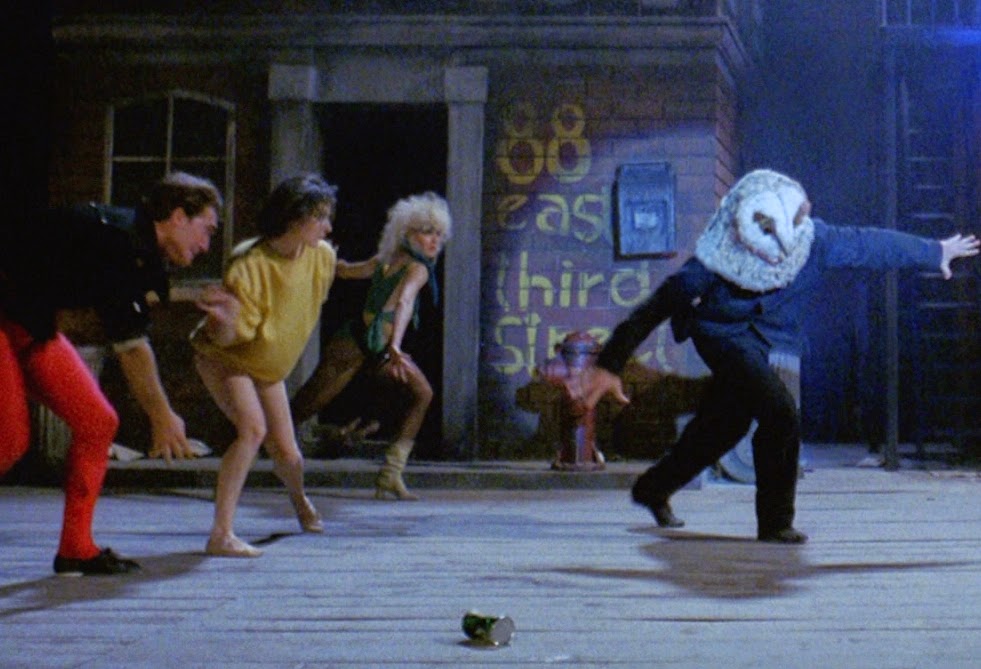 And some FANTASTIC dancing.

Now, a caveat. This film isn't perfect. Shocking, I know. But to fully appreciate the vivacity and color of StageFright: Aquarius, one must be subjected to its truly horrendous electric guitar score. Let me paint you a picture. The lead singer of Flock of Seagulls sits down in his dressing room and pops the needle onto his StageFright soundtrack record. After some thoughtful contemplation while he sips his New Coke, he blows his bleached tip out of his eyes and unplugs the machine. "Too much synth," he says.

The music ineffably lends almost exactly the wrong tone to every scene in which it lurks. Whether it's a tense search for a missing key or a POV shot zooming through backstage, the score lends operatic overture and shrill, Mockingjay-esque whistling in precisely the wrong amounts. At times, the zany energy of the music catches up to the presented visuals in a galvanizing way, but these moments are few and far between.

We're also saddled with a final scene that needlessly extends the run time and makes a half-baked stab at a "killer is still alive" scare that slightly deflates the power of the whole affair.

But while those flaws might be fatal to a lesser movie, StageFright: Aquarius is still more than worth your time. If you make a point to watch just one obscure 80's slasher movie from my frighteningly long list, do yourself a favor and let it be this one.

Killer: Irving Wallace (Clain Parker)
Final Girl: Alicia (Barbara Cupisti)
Best Kill: Peter's arm is cut off with a chainsaw which then runs out of gas, at which point the killer decapitates him with an axe. Deliciously brutal.
Sign of the Times: Oh sweet Debbie Harry, please spare me. 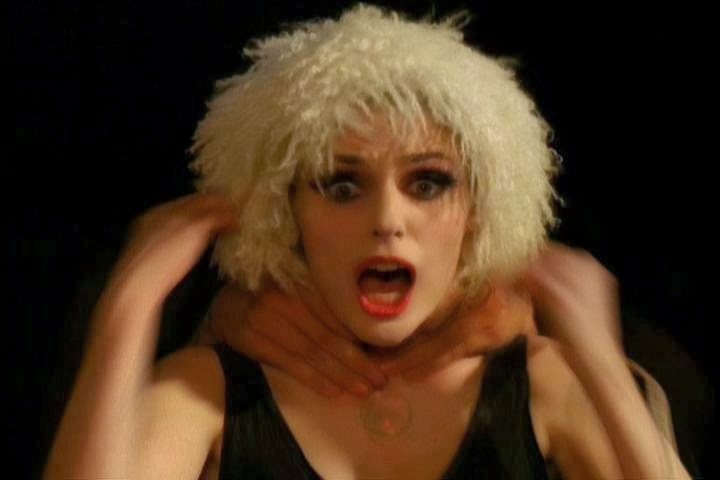 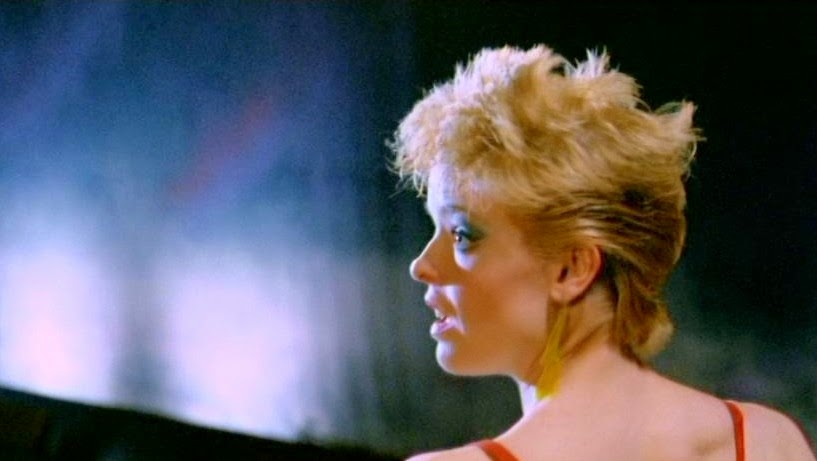 Scariest Moment: Alicia struggles to get a key out from between the floorboards while the killer sleeps.
Weirdest Moment: The film ends on a shot of a Marilyn Monroe lookalike playing the saxophone.
Champion Dialogue: "She's a perfect example of the method, she really feels her parts."
Body Count: 10
TL;DR: StageFright: Aquarius is bogged down by some truly dreadful musical decisions and an unnecessary ending, but it's one of the most electrifying and exciting entries in the late 80's slasher genre.
Rating: 8/10
Word Count: 1548
Also sprach Brennan at 10:04 AM