I am stupendously excited because tonight I am volunteering at the Fangoria booth at the Days of the Dead horror convention in Los Angeles. The magazine has been a centerpiece of the fright community since its inception in 1979, featuring top notch articles about hundreds and (I haven't counted but probably) thousands of horror films and filmmakers. I'm truly honored to be able to participate in even a small slice of this legacy so today's article is

Over the years, Fangoria has featured dozens of genre-changing films on its covers, but the beauty of the thing is that it is inextricably caught up in the time it was produced. Due to the nature of shifting trends, some films featured on the cover never achieved infamy outside of a certain year, while others have long-lasting legacies even today. It's nearly impossible to predict, especially with such left-fielder (at the time) hits like Friday the 13th or A Nightmare on Elm Street, neither of which graced the covers of the magazine during their initial runs.

But more often than not, this leading rag hit the nail right on the head and I've selected ten of my personal favorite films that have appeared on Fangoria covers through the ages. 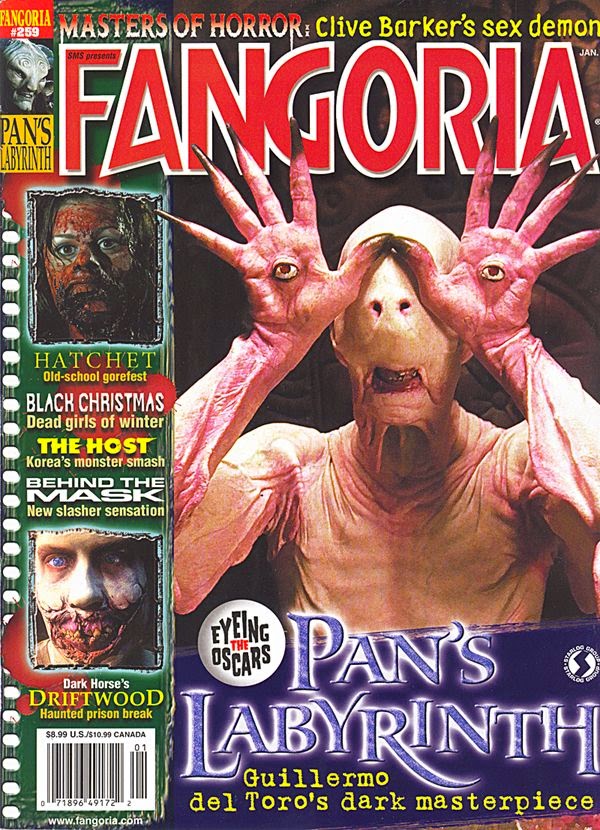 Struggling to find words that adequately imply the enormity and scope of Guillermo del Toro's violent fantasy masterpiece would challenge even the greatest of humanity's writers. Fitzgerald would head for the hills. Dickens would disguise himself as a beggar and escape out the chimney. Kafka would- Well, maybe Kafka would get it.

Pan's Labyrinth is set in the Spanish Civil War, detailing the journey of a girl trapped in circumstances beyond her control as she explores the dark supernatural world hiding in the corners of everyday life. The special effects are exquisite, the story is heartfelt and powerful, and the gore is nightmarishly visceral. Although it's not even explicitly a horror film, Pan's Labyrinth is more likely to give you nightmares than any film on this list.

Unfortunately, I have no full review of this film up on my blog yet, but I have reviewed one of the
Cover Articles: The terrific meta slasher Behind the Mask: The Rise of Leslie Vernon. 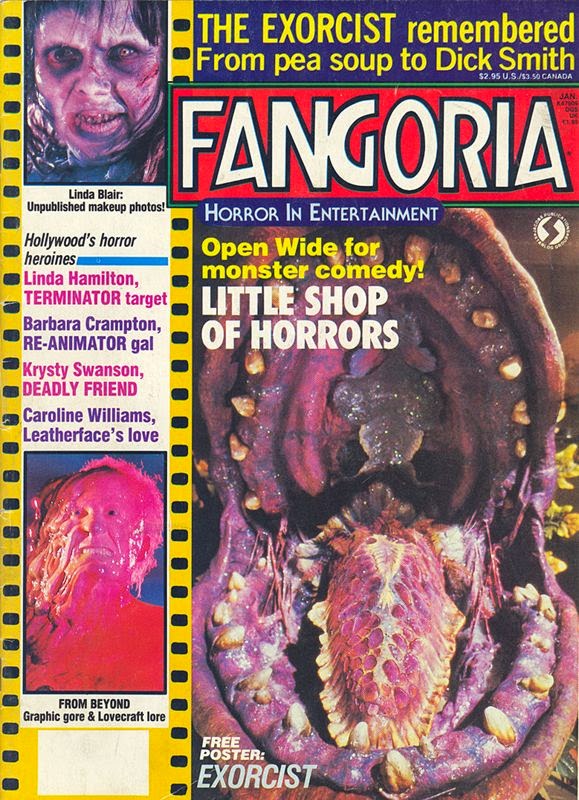 I've watched the original Corman picture, the movie musical, and even performed it onstage five nights a week, yet I will never tire of Little Shop of Horrors. For a movie with so little reason to exist (the movie is based on a musical based on another movie), it's just so terrific. With songs by the unstoppable duo of Alan Menken and Howard Ashman and a wall-shattering performance by original Broadway cast member Ellen Greene, Little Shop has a relentless doo-wop energy that can brighten even the darkest days.

Telling the story of a poor Rick Moranis who has to feed blood to a hungry talking plant in order to make his dreams come true, this film harnesses all the B-movie energy of the 50's and synthesizes it into something totally modern and compelling, featuring Steve Martin in one of his best roles as a sadistic dentist and a gut-splitting cameo from Bill Murray.

Cover Articles: Re-Animator; From Beyond; And although I don't have a review of The Terminator, I wrote this article on it long ago. 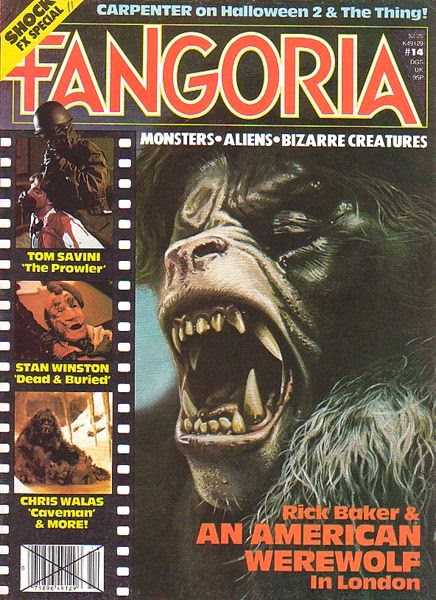 Hands down, An American Werewolf in London is my favorite lycanthropy movie of all time, although it's not like there's much competition in that department. John Landis' seminal horror film features state-of-the-art effects by make-up maestro Rick Baker that haven't aged a day (OK, maybe they've aged an hour, but they're still terrific) and a thorough sense of humor that The Howling briefly scrabbled at, but almost entirely failed to grasp. 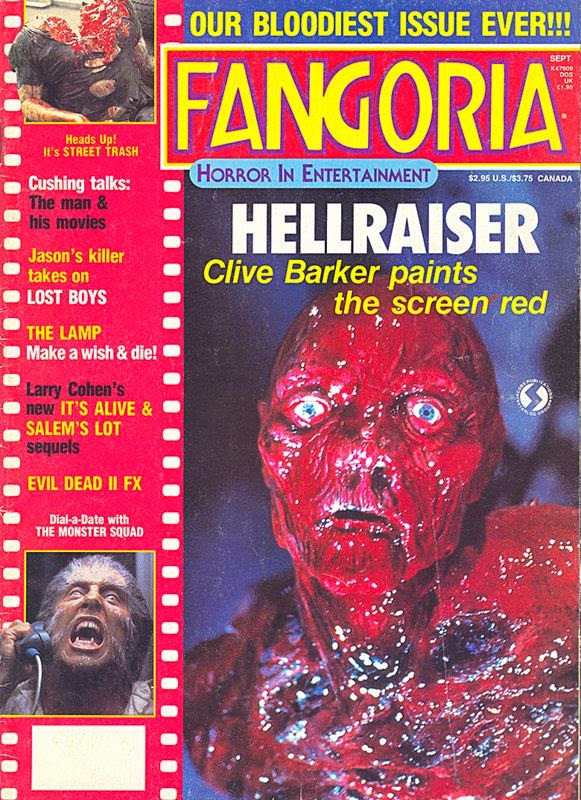 Clive Barker is one of the most important modern voices of the macabre, one of the greatest horror writers alive (now that we've lost Poe, Lovecraft, and - more recently - Matheson), and his directorial debut was sure to be a whammy one way or another (it's a real gamble, as evidenced by Stephen King's Maximum Overdrive). But luckily he erred on the side of the truly fantastic.

Hellraiser is an unstoppable work of glistening cerebral horror, replete with dark sexual imagery and a tense family drama to boot. Pinhead and his Cenobites would soon become overworked stock franchise villains, but here they are representatives of something even more sinister than pure evil - the dark, secret desires of humanity. 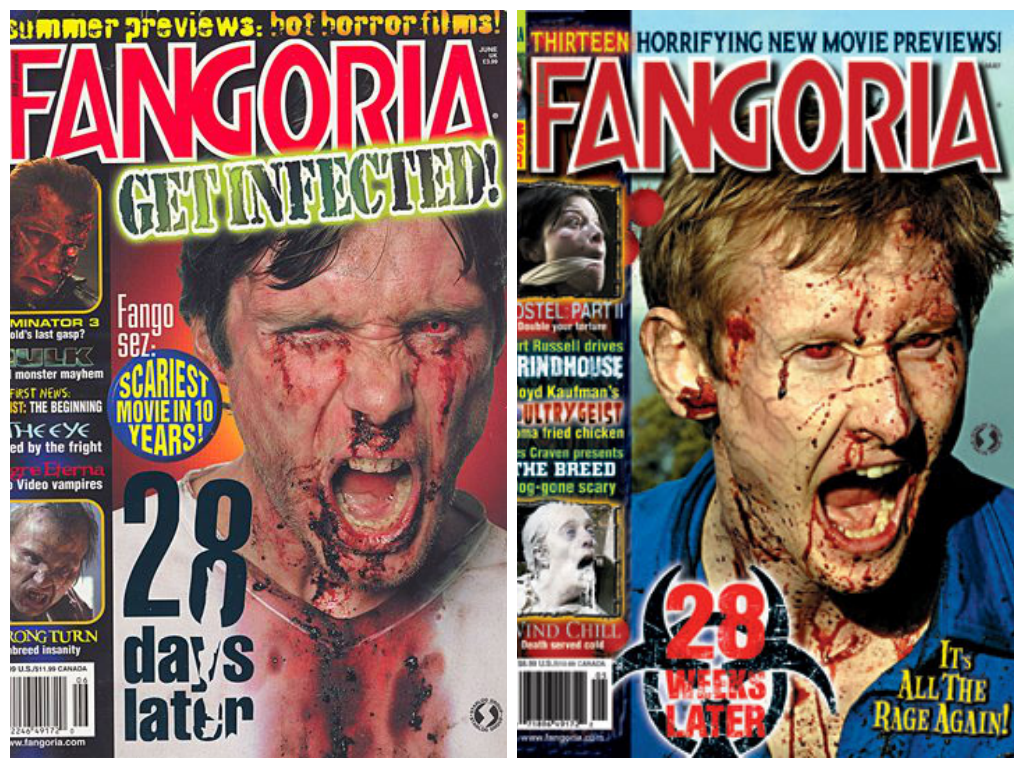 I really need to jump on reviewing these bad boys before I'm 28 months too late. But regardless of the fact that 28 Days Later and its sequel 28 Weeks Later do not appear on the pages of this blog, they are essential movies for any modern genre fan. They kick-started the zombie resurgence in the early 2000's, paving the way for my single favorite film of all time, [REC].

While 28 Days Later was an intense British political allegory, 28 Weeks Later was an expanded look at the aftermath of a large scale crisis. Both are fantastic in their own unique ways (the opening scene of 28 Weeks is among the scariest film moments of all time) and both have a sharp wit that keeps them fresh, but it's up to personal preference to pick a better of the two. I'd prefer not to, myself, letting them stand together as one of the most beautiful, brief horror franchises to ever grace cinema screens. 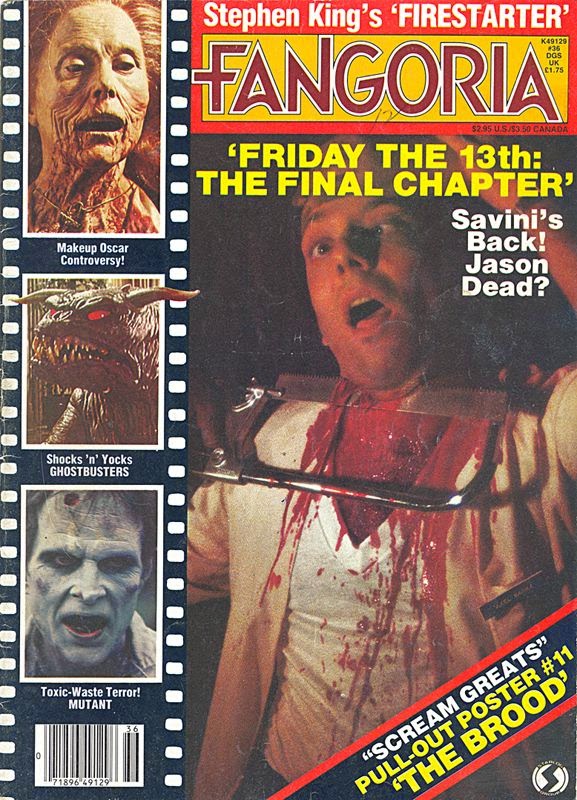 Although there are definitely Friday the 13th films that I've watched more often, Friday the 13th: The Final Chapter is almost inarguably the best in the franchise, at least in terms of what a slasher movie is supposed to be. Tom Savini is at his finest here, pulling out all the stops to destroy Jason, the monster he accidentally created. This entry has the most nudity in the entire franchise (a plus for fans of cheesy exploitation and fans of breasts - pulling in all the demographics here) and an all-star class including a pre-fame Crispin Glover and Corey Feldman.

Of course, we all know by now that this wasn't really the final chapter, but it did end an important era in Jason's career - the Crystal Lake Saga, as I named it just now. With its blood and guts and boobs and butts, as well as the John Hughes-esque slate of teen Meat, it's the perfect capper for this Golden Age of slasher cinema. 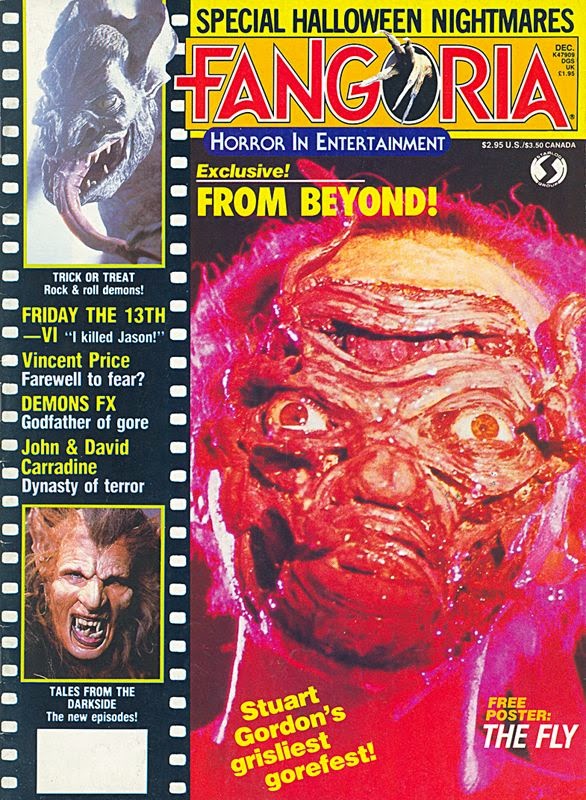 From Beyond is a very recent discovery of mine, and I am deeply ashamed that I wasted so much time watching any other movies besides this one. This film is Stuart Gordon's second H. P. Lovecraft adaptation following his smash hit Re-Animator and it pitches everything that cheery, gory, naughty film did all the way up to the rafters.

The film brings back genre superstars Jeffrey Combs and Barbara Crampton, adding a dash of Dawn of the Dead's Ken Foree, and tossing them into a pool of technicolor goo and Lovecraftian horror. Its stomach-turning charms (and high volume sexual overtones) aren't for everyone, but for fans of practical effects magic, colorful 80's horror, or lamprey basement monsters, this is a veritable Mecca. 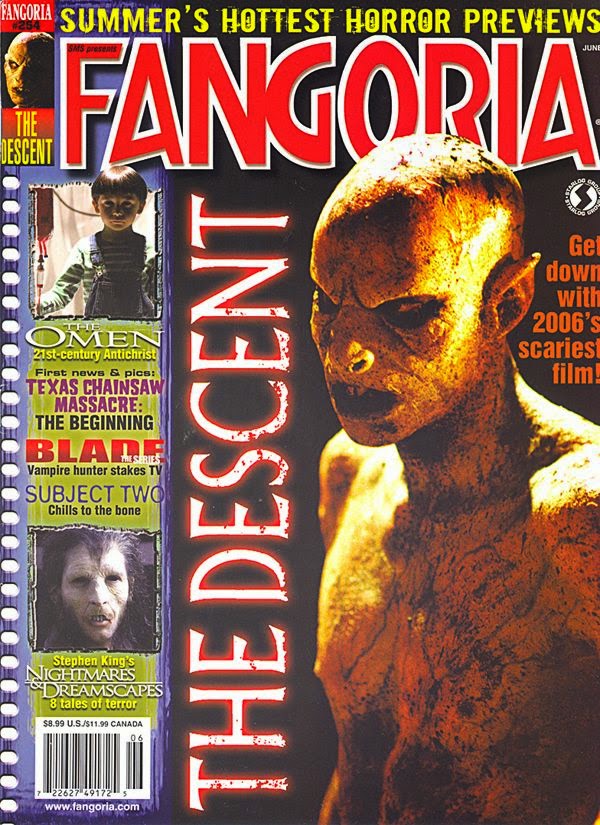 There are only two films from this century that have chilled me to my bones. The first is [REC] but you don't need to hear me babble about that same old crap again. The second is The Descent, which pulls off the incredible horror movie task of having a first act that is just as scary, if not even more terrifying than the rest of the movie, shoving its characters into dark, claustrophobic, utterly real cave environments.

All the bloodshed and monsters are just a delicious afterthought in a wall-to-wall petrifying film. Those who say that horror movies just aren't made like they used to be clearly have blocked The Descent from their memory to prevent nightmares. Although my heart will always lie with Jason Voorhees, it's impossible to deny the sheer volume of good sequels that A Nightmare on Elm Street got. In fact, Wes Craven's New Nightmare is just plain one of the best horror movies in the history of cinema. I don't throw my hat in the ring for a lot of movies, but I'm willing to put it to fisticuffs if anybody disagrees on that one.

Wes Craven's influence over the horror genre is incomprehensibly vast and the intelligence he brings to everything he does created one of horror's most enduring phenomena. The mystique and allure of Freddy Krueger survives far beyond his tawdry comedies and that crappy remake because in everything Freddy does, there remains that spark of inspiration that makes Craven one of the most important filmmakers in the genre. 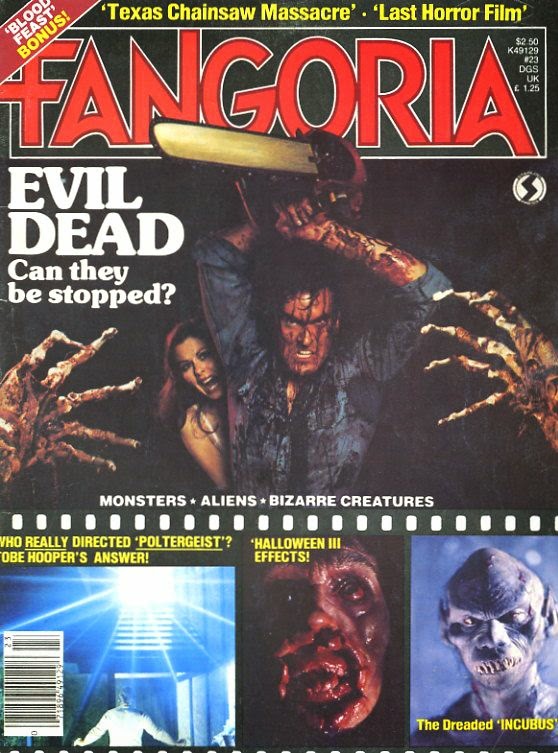 Evil Dead II gets all the credit because it's funnier and consolidates Sam Raimi's style of storytelling into a more mature entity, but I love the rough and ready DIY aesthetic of the original Evil Dead. It's one of the most original horror films ever made, all hung on the most tried and true framework story in the history of the known universe populated with one-dimensional characters.

The beauty of Evil Dead is the simplicity of the story - Cabin. Woods. Zombie things. This allows Raimi room to stretch his creativity in a way that sent the craft of cinema soaring years ahead of its time. I'm too dazzled by the film to make much sense at the moment, but I daresay I've been more coherent on the topic before.

Thanks for trucking along on this historical, fangorical tour. If you happen to be at the convention tonight, stop by and say hi!