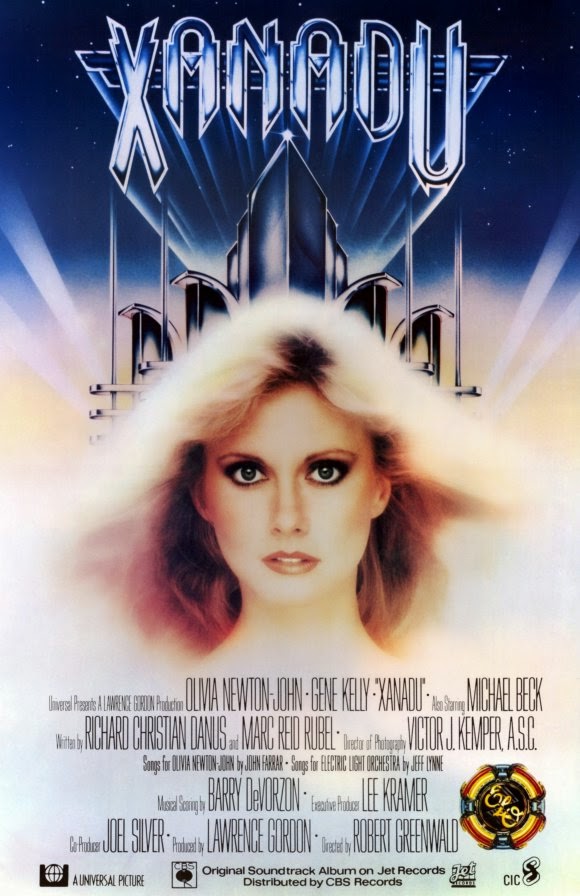 I love the 80's. I love Olivia Newton-John. I love Gene Kelly. I love ELO. I love glitter. I love camp. I love watching other people roller skate. I love bright colors. I love terrible outfits. I love terrible movies. But I also love reversals. I hate Xanadu.

It's just not fair. The 1980 Newton-John vehicle (for Kelly's career it was less a vehicle than a hearse) is the perfect synchronization of just about every element that makes me love a film. So I feel personally affronted when those ingredients synthesize into such a messily boring film as the roller disco flop Xanadu. 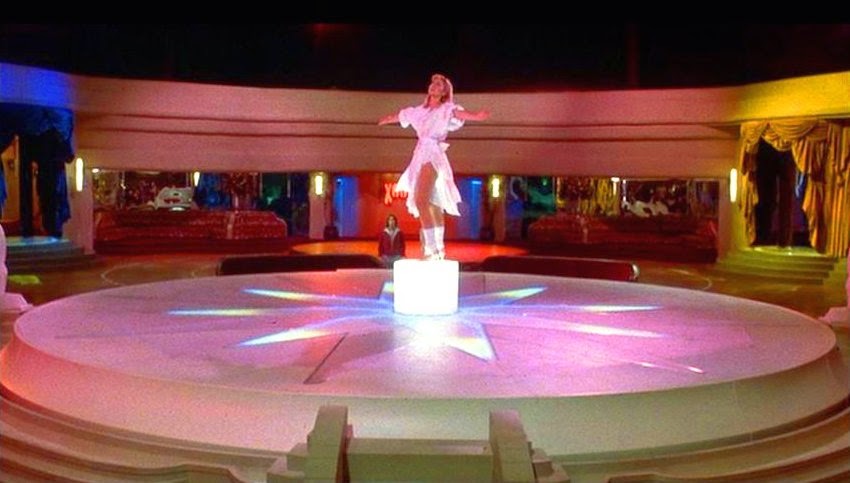 An accurate representation of the number of people who manage to stay awake by the end of Xanadu.

Let's get the story over with quick, so nobody falls under the impression that this is a bad-good movie worth seeing. Kira (Olivia Newton-John) is a muse, one of the nine daughters of Zeus whose duty is to provide inspiration for struggling artists. Sonny Malone (Michael Beck) is a man, a washed-up painter who has recently returned to his creativity-assassin of a job - recreating album covers in large scale prints. Danny McGuire (Gene Kelly) is another man, an ex-clarinetist who longs for the glory days of big band music and who pretends that he gels with the storyline in any meaningful way.

After meeting her several times over the course of a week and discovering her on his newest album cover, Sonny learns that Kira has been sent to inspire him and Danny to work together and create a new club in the heart of the city. I'll give you a nickel if you can guess the name of the club. But Kira falls in love with Sonny along the way, despite the fact that she is set to return to her neon-tinged home dimension upon the completion of the project and that he is a bland, irritating, moppet-headed cipher with no autonomy, no money, and no personality.

You know what? Screw Sonny. She should have ended up with Gene Kelly.

This simple story kicks in only at the beginning and the end of the film, much like bookends. But whereas bookends are used to house important compendiums of the world's knowledge and foremost literary minds, these plot nuggets are used to sandwich a whole bunch of roller skating to fitfully lip-synced ELO and/or Newton-John songs. It is up to you to determine the relative importance of these two tasks, but take it from me that your money would be better spent on the bookends. 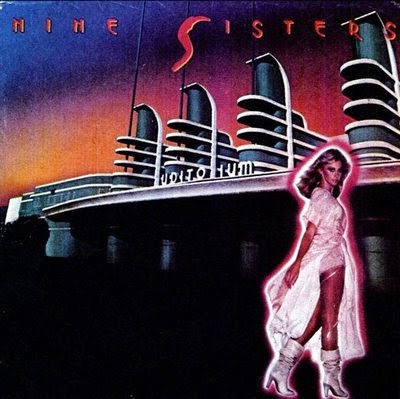 Or honing your irony skills to satisfactorily explain why this print is hanging on your wall.

Xanadu is an exercise in frustration, frequently setting up dominoes that would indicate a fun, glitzy romp, then encasing them in cement so they can never be properly knocked down. Allow me to take you on a macabre tour of some should-be camp classic scenes that are ruined for one godforsaken reason or another.
We are also saddled with an interminable and extraneous animated sequence and about 92 scenes of Sonny roller skating while unrelated ELO songs play in the background just to remind us that they worked on this movie. The fact that they seem to actively flaunt their involvement in Xanadu is a testament to the purity and overwhelming power of... the drug market in the late 70's.

There are only two good scenes in the entire film, and neither of them live up to the lofty expectations, given the film's status as a cult classic. One, in which Kira roller blades around an empty warehouse while flirting with Sonny and shifting in and out of corporeal reality is reliably strange and arresting, though it suffers from the film's budget. The other is the (almost) showstopping (almost) final number "Xanadu," which is the only good song to come out of the entire affair, though the performance of said number is just about as lackluster as everything else in the preceding 80-something minutes. 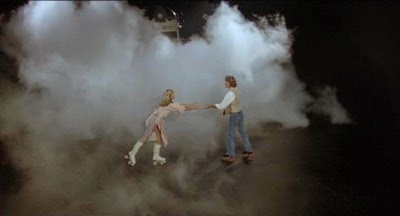 Is it too much to ask for a little pizzaz in my roller skating fantasy numbers?

It's too low budget to achieve anything more than a vaguely glitzy series of sets composed almost entirely of cheap lighting effects in dark rooms. The framing is frequently alienating, usually forcefully shifting focus from the central figure by accidentally obscuring them with something far more interesting, like a dancer being spun on a ring by her neck.

Even when the framing isn't ruining a shot, the composition and coverage work double time to pick up the slack, like a bleating ballad that is shot absolutely static for five minutes, only deigning to subtly zoom in on Newton-John's face on occasion as if to prove to themselves that the camera was still actually on. By the end of the film, even the dancers look bored - as if instead of using a metronome, director Robert Greenwald (whose career has taken a far less dismal and bleak turn - he now directs documentaries about the drone wars) sat there reading War and Peace aloud.

One of the only good things about the film is that they let Newton-John use her native Australian accent. Hearing a non-American accent in a Hollywood film is nothing to spit upon and that at least maintains auditory interest during the long, long, long wait for the closing number. But everywhere it can, Xanadu sucks the air out of itself like an auto-cannibalizing glittery vampire, reducing itself to a mewling, quivering wreck of a movie.

TL;DR: Xanadu is underbaked, boring drivel when it should be a high-fashion camp classic.
Rating: 2/10
Word Count: 1225
Also sprach Brennan at 2:40 PM