Year: 1953
Director: Phil Tucker
Cast: George Nader, Gregory Moffett, Claudia Barrett
Run Time: 1 hour 6 minutes
It's October, which means it's time for the 8th Annual Great Switcheroo with Hunter Allen of Kinemalogue. Holy shit, we're old! As you assuredly know, Hunter runs a series of reviews of 50's sci-fi B-movies, and every year in this spookiest of seasons, he shows me his and I show him mine. Mine being 80's slasher films. He has given me three shiny new sci-fi flicks to inspect. Keep an eye out on his page, because those three slasher reviews will be coming from Hunter a little later this month.
We're starting off the festivities with the reasonably infamous Robot Monster, an independent film from 1953. It doesn't have the cultural prominence of your Plan 9 from Outer Spaces or your Trolls 2, but for those maniacs who want to dig deeper, this film is right under the silt that you first brush off of bad-good cinema history. It's an entry I've always been curious to check out, and once again Hunter has given me an excuse to educate myself. 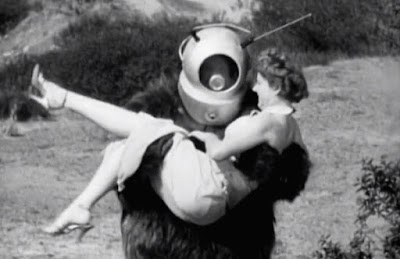 Say it with me now. Thank you, Hunter!
Predictably, the title is a huge lie. However, in a break from convention, the poster itself is actually pretty accurate. We're not dealing with a robot monster, but in fact an extraterrestrial gorilla with a space helmet (George Barrows). He is at the center of a story so incoherent it demands years of intense examination and study like a holy text. Although the timeline of events and the relationships at the core of the film are formed according to a brain-melting form of non-Euclidian geometry, I'll do my best to assemble some kind of plot synopsis.
In a rocky gorge that's different from the typical California scrub seen in sci-fi B-pictures because it has even fewer plants, young boy Johnny (Gregory Moffett) encounters what is either a stranger or his father (even though age-wise it makes way more sense for him to be a grandfather), a man known only as The Professor (John Mylong). Rather than trying to rob the Royal Mint of Spain, he's studying... archaeology? Chemistry? Space travel? Telecommunications? Let's just say Science. He has a hot assistant named Roy (George Nader), who has a strained relationship with the sexy scientist Alice (Claudia Barrett), who is so obviously Johnny's mother that of course the script makes it abundantly clear that they are siblings. The bulk of the confusing relationships in the film are somewhat cleared up by a stupid twist ending, and this is the only one the film stays constant on.
We learn that this film is set in a post-human apocalypse, where the space gorilla née robot monster has conquered the human race, destroying everyone but the aforementioned characters (plus an elderly mother and a little girl who have very little to do with the plot) with his cosmic ray. The family and Roy are immune to this ray because of an antibiotic (pronounce this word however you want, because the cast sure does) invented by the Professor to cure all diseases. With their resources dwindling, they realize they must either defeat or appease the space gorilla, who by the way is called Ro-Man (or "Roman," according to the Professor, who has an inexplicable German accent I neglected to mention earlier, because I was just too distracted by everything else). 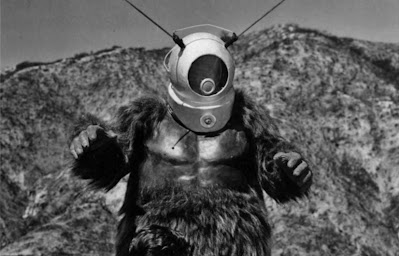 Also, it's hard to see what I'm typing through the TV antenna space diver helmet I'm wearing in an attempt to do as the Ro-Mans do.
Robot Monster is objectively bad. It just is. Exhibit A: It's a film that follows the grand B-movie tradition of shoehorning in footage from other movies, only this time around it's a loop of about six seconds of dinosaur fighting that might as well be proceeded by the Monty Python "And now for something completely different" tag. Exhibit B is everything else I've already said and am going to say about Robot Monster.
The acting, for one thing, is terrible. It's a fool's errand to expect quality from child actors ever, but it's "poke a sleeping tiger" inadvisable to expect it from a 50's B-movie. So it's perhaps not shocking that Moffett and Pamela Paulson as his little sister Carla shriek like ungreased wagon wheels for the entirety of the film. The rest of the adult cast acquits themselves poorly in the typical overacting 50's way, except for Mylong, who is on some Dr. Scott from Rocky Horror shit. Unfortunately, not even George Barrows can pull off a good performance as the titular monster. His absurdly over-exaggerated silent movie gestures bely the fact that they dubbed in his dialogue later because they match absolutely nothing the character is actually saying. When he's rampaging through the small sliver of gorge they were allowed to shoot in, he looks less like an intimidating apocalyptic threat than a petulant child throwing a tantrum.
I've hopefully already expressed how flawed the screenplay is, but wait! There's more! Every character knows that if they leave the bounds of the something something electricity field that's preventing the monster from learning their location, they keep just wandering over to Ro-Man's cave, rooting around for a satisfactory motivation and coming up empty every time. In fact, Roy and Alice have sex in the bushes about ten feet from the monster who they know is there and has a deep fundamental desire to destroy them. 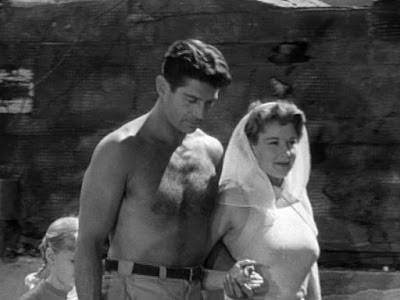 Get it where you can though, Alice. When the only human man in existence who isn't related to you looks like that and is so allergic to shirts that this is a shot from their WEDDING, repopulating the Earth suddenly doesn't feel like so much of a burden.
Robot Monster isn't a bad-good masterpiece in the way of something like The Room, but it's utterly endearing and enjoyable in the way of a cousin who's a total dipshit but you love them anyway. You can tell that it's trying, and you just want to give it a hug and tell it everything will be OK. Plus, it really does deliver on just acres of footage of a man wandering around in a gorilla suit with a ray gun, and if that doesn't appeal to at least some small part of you, I don't think we can be friends.
Also, while this movie being totally unrelated to any sort of Hollywood guidance is certainly to its detriment in some ways, it does take swings that most movies of this era would have been afraid to risk. For one thing, it's horny as hell. The raw sexual nature of George and Alice's relationship is as clear and legible as the opening credits. There's a cut to black right after Alice lies back on the dirt preparing to be raw-dogged. And then Alice literally lets Carla die because they're so eager to get railed on her wedding night. A train going into a tunnel, this ain't. Also, a dash of child murder is a thing you don't get in too many of these films either.
Robot Monster is a little too boring in the middle to be a romp all the way through, but it's barely over an hour long, and so much of it is so delightful to engage with. During the tedious bits you can focus on trying to piece together the Christopher Nolan-esque puzzle box of what the fuck is going on with this family, and then you're back to something truly wild about using wrenches to contact a space station or whatever. It's a movie that's truly impossible to rate, so feel free to ignore my score. If this sounds up your alley, go see it without hesitation. That's all I can say.
That which is indistinguishable from magic:
The morality of the past, in the future!:
Sensawunda:
TL;DR: Robot Monster is a charming epic disaster.
Rating: 3/10
Word Counter: 1510
Cardboard Science on Popcorn Culture
2014: Invaders from Mars (1953) The Day the Earth Stood Still (1951) Them! (1954)
2015: The Giant Claw (1957) It Came from Beneath the Sea (1955) The Brain from Planet Arous (1957)
2016: Invasion of the Body Snatchers (1956) Godzilla (1954) The Beginning of the End (1957)
2017: It Conquered the World (1958) I Married a Monster from Outer Space (1958) Forbidden Planet (1956)
2018: The Fly (1958) Attack of the 50 Ft. Woman (1958) Fiend without a Face (1958)
2019: Mysterious Island (1961) Robinson Crusoe on Mars (1964) Plan 9 from Outer Space (1959)
2020: The Colossus of New York (1958) It Came from Outer Space (1953) Rodan (1956)
2021: Robot Monster (1953) Queen of Outer Space (1958) The Cyclops (1957)