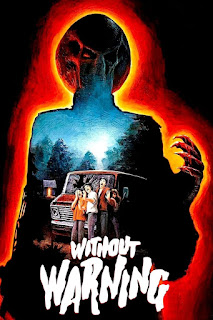 Year: 1980
Director: Greyson Clark
Cast: Jack Palance, Martin Landau, Tarah Nutter
Run Time: 1 hour 29 minutes
MPAA Rating: R
Part of the reason we're going back to 1980 to scoop up extra movies is that some films slipped through my net before I refined my criteria for what does or doesn't qualify as a slasher film. Without Warning, which is about an alien invasion (well, kinda), just didn't seem to fit the bill at first. But the more I looked at it, the more I realized how uncannily it does follow the slasher formula, even considering that this should be pretty well impossible for a film that came out just three months after Friday the 13th. 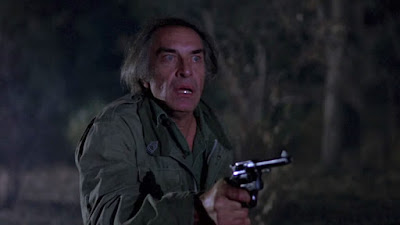 We've got a Crazy Ralph and everything!
Without Warning has a lot of slasher royalty behind it, as well. Generally the doddering, inbred kind of royalty, but it was shot by Dean Cundey, so that's nice. At the helm here is Greyson Clark, the director behind my fourth least favorite slasher of 1982, Wacko! There's also an Alone in the Dark pre-reunion going on here, teaming Jack Palance with Martin Landau because apparently they were just doing whatever script scribbled on a napkin was shoved in front of them in the early 80's. Anyway, I digress. Let's cover the plot, insofar as there is one (Another slasher trope! I've said this exact sentence dozens of times!).
A hunter (Cameron Mitchell of The Demon, Blood Link, Trapped Alive, Terror Night, Deadly Prey, and Memorial Valley Massacre) and his son Randy (Darby Hinton of Wacko) are killed out in the woods (as played by California dry brush) by what can only be described as extraterrestrial ninja stars. They're basically little frisbees that look like sand dollars with little fanged sucker mouths that attach themselves to your skin via little tubes and start sucking out your insides. They also take down a comic relief Scoutmaster (Larry Storch of Sweet 16) before four horny teens come careening in with their camper van. Now that's more like it!
These teens are the Horny Sex Couple Beth (Lynn The) and Tom (David Caruso, who I certainly didn't expect to see mucking about in the slasher trenches, and boy what a twink he was 41 years ago) and the Sweet Couple Sandy (Tarah Nutter) and Greg (Christopher S. Nelson). The horny teens are dispatched almost instantly and Greg and Sandy are sent running through the woods and into town, where they encounter the Man Who Cried Alien, Sarge (Landau) and reunite with their harbinger, creepy gas station attendant Joe Taylor (Palance). They do eventually discover that there is a humanoid alien  (Kevin Peter Hall, who would go on to greater glory playing an alien in a little film called Predator) throwing these sand dollars around to murder people for.... reasons, and he's hiding the bodies in... a shed. Spooky! 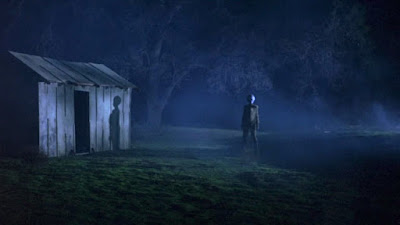 It really sends a shiver down the spine, dunnit?
If there's one thing I've learned from a long and intensive study of slasher movie posters, it's that if the cool-looking monster or alien is shown in detail, then you're only gonna get to see it onscreen for twenty seconds max. I'm looking at you, The Slayer and The Incubus. If a film has enough of the monster that it wants to keep it a secret to surprise the audience, then that's when you end up with a subtle poster like Alien. So at least I didn't come into Without Warning with any illusions about this alien menace.
Ultimately, the design of the alien once we see it (once in a flash under a swinging lamp, the remaining 1 and a half scenes largely in shadow) is a pretty good, if uninspired variation on the Greys. The sucker discs look a little shoddier (when they're sucking their victims dry they're covered in what is unmistakably ketchup and mustard), but they're at least fun B-movie images if you suspend your disbelief off a cliff. Unfortunately, this hot-dog-esque M.O. is the only way people are killed in the movie, so it wears thin long before the gags peter out. 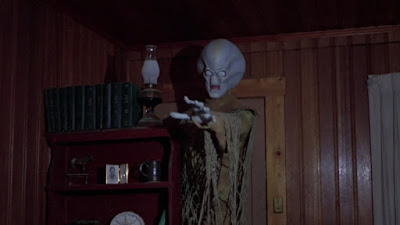 But isn't it nice that at one frame of the movie looks like this?
Although the effects bringing the sci-fi elements to life are very 80's, the rest is an extremely effective pastiche of an average 50's B-picture. In that nothing happens for 80 minutes. Greg and Sandy run through empty woods interminably, then sit in a bar during a power outage that I'm pretty sure was engineered because they didn't budget for that many lights. The filmmakers seem to have come to the conclusion that the cheapest special effect is human beings grousing at each other in the dark. And the pacing of the kills is terribly poor (another slasher trope executed with aplomb), with most of the kills happening in the first two reels to leave plenty of time for wandering past some scrub.
Palance and Landau don't liven up the proceedings, barely showing a shadow of even the screen presence they display in Alone in the Dark. But then again it's hard to breathe life into a character when you're asked to spout dialogue like "Alien! Alieeeeen! ALIEN!" The only performer who is doing anything remotely interesting is Larry Storch, in an unfathomable turn as a Scoutmaster who warns the boys against picking up rattlesnakes because they "carry germs" and tries to light his cigarette by holding it against a rock and striking it with flint. He is carted in from a completely different movie and carted back out more or less immediately.
All in all, despite its mild B-science fiction charms, Without Warning presents us with almost nothing to recommend itself. It's a dreadfully tedious motion picture experience that wastes every ounce of talent spent on it (and once you get past those two veteran actors and Dean Cundey, that well is already shallow as hell). This kind of film is why I'm glad to mostly be free of 1980. It doesn't have the vigorous excesses of the later 80's, but it's not sober or serious like the late 70's, so it's really just a waste of time all around.
Killer: Alien (Kevin Peter Hall)
Final Girl: Sandy (Tarah Nutter)
Best Kill: They're legitimately all the same, but the death of the Scoutmaster has the ooziest gooiest blood splatter, so I'll pick that one.
Sign of the Times: Greg has to use a dial to turn on his windshield wipers.
Scariest Moment: Martin Landau points his fun at Greg and starts yammering about how the aliens are all his fault.
Weirdest Moment: In the spooky gas station, the gang discovers an upside-down baseball cap in which a rat is snuggled with its litter of babies.
Champion Dialogue: "I saw something outside that bar I've never seen before, and I have no desire to see it again."
Body Count: 9
TL;DR: Without Warning is a dire sci-fi B-movie that wandered its way out of the 50's and got itself some decent special effects that are hardly used.
Rating: 3/10
Word Count: 1211
Also sprach Brennan at 7:43 AM