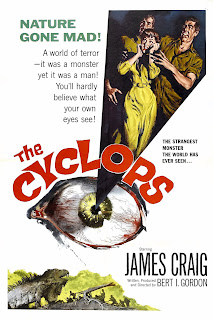 Year: 1957
Director: Bert I. Gordon
Cast: James Craig, Gloria Talbott, Lon Chaney Jr.
Run Time: 1 hour 6 minutes
The time has come to turn our eye to the final film in the 8th Annual Great Switcheroo with Hunter Allen of Kinemalogue. The final 50's sci-fi movie he assigned this year is 1957's The Cyclops, from B-movie maven Bert I. Gordon, who we've previously covered in the "giant locust" picture The Beginning of the End, which also came out in 1957. As did his film The Amazing Colossal Man. 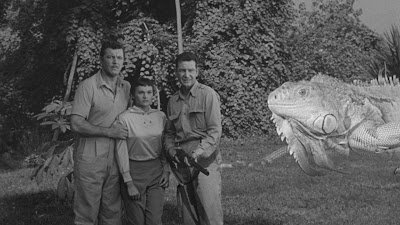 You can really taste how much care he took with his films, can't you?
The Cyclops is a film set in Mexico, which is a great idea for a white cast and crew who've seen a couple Spanish words and are pretty sure they've got it figured out, no need to check with anyone. Apropos of nothing, this film is set in the fictional town of Guayjorm.
G U A Y J O R M
If you know the first thing about Spanish, roll that one around in your mouth for a bit. Then spit it into the garbage where it belongs.
Anyway, the desert outside of *ahem* Guayjorm is the last known location of Bruce, the fiancé of Susan Winter (Gloria Talbott, who would go on to appear in I Married a Monster from Outer Space) who disappeared three years ago when his plane crashed. She has gathered a team of men to bankroll and execute her search mission, though everybody has their own motives for being there. Russ (James Craig) is Bruce's best friend and clearly wants to discover that Bruce is dead so he can have Susan for himself. Marty Melville (the Lon Chaney Jr.) is intent on finding a huge uranium deposit he suspects is located under the mountains. And Lee Brand (Tom Drake) is the pilot. Frankly, I can't remember what he wants. He's just another squarejaw to have on hand to gawp at things.
Pretty quickly, but not quickly enough for a 66 minute film, they discover that the desert is irradiated and all the creatures that one might find at one's local pet store have grown to enormous size. They also discover a save where a giant cyclops mutant resides, just a stone's throw away from the wreckage of Bruce's plane. The idea that the irradiated monster might be what has become of Bruce is floated exactly eight minutes before the end of the movie. 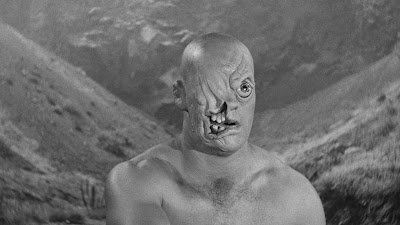 Y'all. Get with the program. I haven't even met Bruce, and I know this is him.
I think I'll start with what I like about this film. Don't worry, this won't take long. I do enjoy that this film has plenty of interpersonal conflict with which to fill its monster-less first act, even if it's fucking stupid (Marty knocks out the pilot in a frenzy of what can only be described as uranium horniness, nearly killing them all, and is forgiven within five seconds). And although the film is very much in the "nuclear monsters" vein that so many 50's films are, it takes on a more modern horror film structure where the conflict arises from the transgressions of the protagonists rather than humanity's hubris in pushing science forward. If the crew had simply not broken the explicit rules of the... Guayjormians(?), they wouldn't be in this mess at all.
Well, I hope you liked all that positivity!
Yikes, The Cyclops is pretty bad, innit? It's a taut film without any fat but it also doesn't have any meat to speak of. For one thing, Susan and Russ's incipient romance is wan and narratively broken, not helped by the fact that they are styled to look like the two least appealing people in the world. Craig just looks like one's worst nightmare of a boring white man, but Talbott has her hair dressed in this combination of a Goody Proctor bonnet and Handmaid's Tale bangs that is positively eye-blistering. And Lon Chaney seems to be competing in a private competition for the title of World's Sweatiest Man. All of these people have looked like totally normal human beings in other works, but somebody on the hair and makeup department needs a quick blast with a fire hose.
The way they look is bad enough, but the way they behave is befuddling at best, and downright sociopathic at worst. I would like you to practice the most bored monotone in which you could deliver the line "Now I know I wasn't imagining things when I saw that giant lizard yesterday," and know that Russ's delivery is still eight times worse than that. I'll take the studied flatness at least, considering that it's preferable for the callous disregard with which they treat other human beings. Russ' introductory scene is him mocking a shopkeeper for not speaking English in a village in Mexico that is her hometown, and the way they end up handling the monster once they realize it's Bruce is cruel beyond all measure. It's positively mind-boggling.
Luckily, there are other monsters in this movie, right? 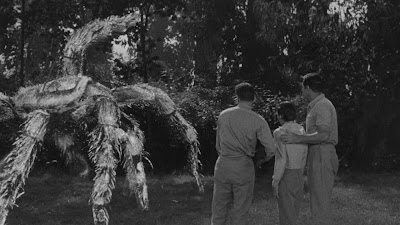 Right??
Typically all sins can be forgiven when the giant monsters are fun to behold, even if they're terrible-looking composites as they usually are. Unfortunately, the laziness of the effects here knows no bounds. They reek of "let me raid my nephew's terrarium" and only meaningfully seem to exist within the same plane as the actors in one single shot of a big lizard licking Russ's arm. Chilling stuff! But stuff like the Cyclops' grasping hand waving in front of Lon Chaney's face by a margin of about 8,000 miles isn't bad in a cute way. It's just insulting. At least the Cyclops looks decent. I dig the exposed teeth design around the mouth, and while the way its forehead wrinkles and pulsates is clearly just wrong, it does at least look uncanny. The closest the film gets to a spark of bad-good joy is the iguana that roars like a lion, which I must confess I enjoy very much.
I have seen and enjoyed a great many bad monster films with bad effects, but there's something just so putrid about this one. It's not like anyone needed me to warn them away from seeing The Cyclops, but in case you're curious how about you check out *checks notes* literally anything else instead.
That which is indistinguishable from magic:
The morality of the past, in the future!:
Sensawunda:
TL;DR: The Cyclops is a B-movie with bad effects that are so lazy they doesn't even rise to the level of charming.
Rating: 3/10
Word Count: 1290
Cardboard Science on Popcorn Culture
2014: Invaders from Mars (1953) The Day the Earth Stood Still (1951) Them! (1954)
2015: The Giant Claw (1957) It Came from Beneath the Sea (1955) The Brain from Planet Arous (1957)
2016: Invasion of the Body Snatchers (1956) Godzilla (1954) The Beginning of the End (1957)
2017: It Conquered the World (1958) I Married a Monster from Outer Space (1958) Forbidden Planet (1956)
2018: The Fly (1958) Attack of the 50 Ft. Woman (1958) Fiend without a Face (1958)
2019: Mysterious Island (1961) Robinson Crusoe on Mars (1964) Plan 9 from Outer Space (1959)
2020: The Colossus of New York (1958) It Came from Outer Space (1953) Rodan (1956)
2021: Robot Monster (1953) Queen of Outer Space (1958) The Cyclops (1957)