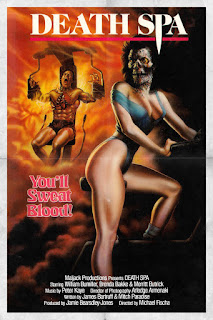 I have so many thoughts swirling around in my brain about Death Spa that I’m gonna cut to the chase in this introduction so I can get to unpacking what the hell it is I just watched. In short, I resuscitated Census Bloodbath with the adrenaline shot to the heart that was Killer Workout, and I thought it was only fitting that I follow it up with that other late 80’s slasher about murders at a health spa. Other than that link, Death Spa couldn’t possibly have been a more different experience, and I daresay it’s about time to dive into that twitchy mass I’m – for lack of a better word – going to have to call a plot.

There’s less aerobics stock footage at least, though I’m not really sure that’s a positive.

So, the Death Spa in question is Starbody Health Spa, owned by one Michael Evans (William Bumiller), a widower who has struck up an affair with his customer Laura Danvers (Brenda Bakke of Tales from the Crypt: Demon Knight). After Laura sustains a chemical burn from a malfunctioning sauna, mysterious accidents and deaths plague the spa, and as the crew prepares for its annual Mardi Gras party (unintentionally minting this a proper holiday slasher), bodies – and suspects – begin piling up. Investigators Sgt. Stone (Rosalind Cash of Tales from the Hood) and Lt. Fletcher (Francis X. McCarthy of Interstellar and a bunch of Steve Martin comedies) might suspect Michael at first, but almost everyone in this overpacked cast starts to smell a little fishy.

High on the list is David Avery (Merritt Butrick of Fright Night Part 2 and Star Trek II and III), the twin brother of Michael’s ex-wife Catherine (Shari Shattuck) and the computer programmer in charge of the spa’s preposterously high-tech control room. Not since Chopping Mall has an 80’s movie so vastly overestimated the amount of flashing buttons and dials that are required by the average local business. David also hates Michael’s guts, blaming him for his sister’s miscarriage and suicide.

Anyway, we’ve also got Michael’s lawyer Tom (Robert Lipton) who wants to keep the club open at all costs; the manager Priscilla Wayne (Alexa Hamilton), who was the first to find Laura despite supposedly having left the spa earlier that night; Marvin (Ken Foree of Dawn of the Dead, From Beyond, Leatherface: The Texas Chainsaw Massacre III, and just so many cult movies), the… I don’t know, janitor? Security guard?; and Dr. Lido Moray (Joseph Whipp, who played a sergeant in A Nightmare on Elm Street, a detective in Chiller, and the Sheriff in Scream, so apparently Wes Craven was pleased with his work), a parapsychologist investigating the scene.

And why exactly is a parapsychologist here? Well you see, Michael keeps having dreams of his dead wife demanding that he kill himself, and he’ been receiving creepy computer messages from her before that was a thing people could just do. Is there something paranormal going on, or is this just a plain and simple hack and slash routine with some gaslighting thrown in for flavor? 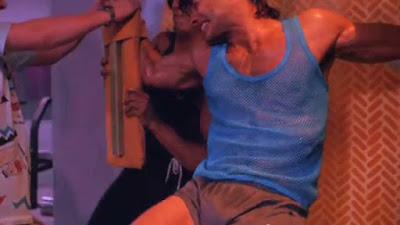 Spoiler alert: it’s very confusing, but it’s not neither and maybe both.

Death Spa is one of those bad movies where everyone introduces themselves with their full name, and I’m so glad the filmmakers assumed we were all idiots, because if this script wasn’t dumbed down a smidge, it would be absolutely impenetrable to anyone but the people who wrote it. The characters aren’t quite distinct enough in looks or personality to be able to tell who is doing what (except for the one recognizable face, Ken Foree, but his character is useless and onscreen for maybe five minutes), the unclear reveals are a series of bizarrely elliptical paranormal happenings, and the deaths are shot so poorly it’s almost impossible to tell who is being killed by what implement except for the fact that it’s happening and it’s gross.

But there’s the thing. As difficult as it was for me to put together a coherent body count list for this review, the murder sequences have an untamed power that is absent from most toothless 1989 slashers. The viscera is present and unrelenting, whether it’s an eyeball exploding out of a burning corpse, a man’s brains splashing onto a sauna bench, or a blender converting an arm into a bloody smoothie. The effects aren’t exactly stellar, but for a film of this vintage they’re both surprising and relatively innovative. One death in particular, in which a girl is sprayed with either boiling water or acid (if I haven’t made this point already, Death Spa has a clarity problem) is so nauseatingly rendered that it sent a chill up my spine and had me asking some hard questions about why I continue watching these movies. That might not sound like a compliment, but it is. 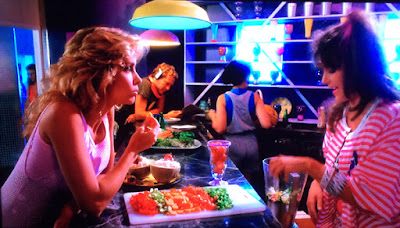 A slasher being physically affecting in any way is rarer than finding a four leaf clover made of leprechaun gold.

The confusion isn’t really helped by the sheer amount of noise this movie produces. Not enough people die to justify the alarming abundance of characters in this movie, including  comic relief schlub with an inexplicable British accent who gets two laugh lines, then promptly exits the movie. But all of this contributes to a sense of never really knowing what’s going to happen next, and this movie is packed to the gills with delightfully bizarre little moments and details around every corner that are satisfying for the lover of strange cinema. There’s even a scene of inappropriate football tossing (across a desk in an office, in the middle of a conversation), a hallmark of bad filmmaking as written in stone by The Room.

And boy does this movie make a habit of chucking in the most insipid good-bad false scares ever conceived (in a  scene where we’re emend to believe Laura is dead, it’s revealed that she’s merely taking a nap face down on the couch. You know, as humans do.) All of this is a little disappointing considering that when Death Spa is on it’s on, providing some truly macabre imagery that’s more than a little shocking from a horror flick of this vintage. Fortunately, the bad scenes are pretty amusing, but the good scenes almost get in the way of them and vice versa.

I’m almost at a loss for words to describe how I feel about this film. It’s utterly perplexing and frustrating, but that might just be the most delightful thing about it. I commend the filmmakers for going to the extra mile and not just turning this into some aerobics slashing boilerplate, but I just have no idea what it actually is. Death Spa is beyond description, and thus inherently worth giving it a look.

Killer: [Caroline Avery (Shari Shattuck), as channeled by her brother David (Merritt Butrick)]
Final Girl: Michael Evans (William Bumiller) feat. Laura Danvers (Brenda Bakke)
Best Kill: Priscilla is frightened by a violently wobbling mirror in the bathroom, which then explodes outward, sending shards of glass – along with her face – smashing to the floor.
Sign of the Times: When the douchey beefcake Robert rebuffs a girl who’s flirting with him, he smirks and says, “I’m Beta. You’re VHS.”
Scariest Moment: Possessed fish begin screaming at Lt. Fletcher in the gym’s walk-in freezer.
Weirdest Moment: suspicious of Tom, Michael barges into his apartment to confront him – but first he compliments his short shorts.
Champion Dialogue: “You’d resort to the only weapon in your system file: jock violence.”
Body Count: 9; not counting many trampled/burned alive partygoers, or whatever the hell happens to whoever the hell the villain was
TL;DR: Death Spa is confusing, gruesome nonsense, which means it's a pretty great late 80's slasher.
Rating: 6/10
Word Count: 1399
Also sprach Brennan at 9:19 AM