Merry Christmas, to all who celebrate it! In honor of the holiday, and the endless terrible movie options it provides, today I'm doling out some mini-reviews for two of Netflix's attempts to snatch the Hallmark Channel's weave. 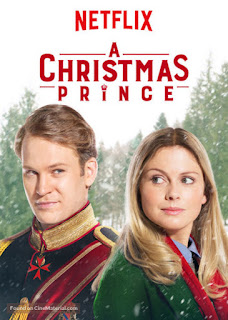 A plucky journalist masquerades as a tutor to gain access to the royal palace of Aldovia in the days leading to the coronation of its playboy prince. She wants a scoop, but she might just find a heaping helping of love.

There are certain films that inspire me to hop to it and start writing. My mixed-but-positive review of The Greatest Showman just poured out of me, because I had a lot to say as I parsed out what exactly my feelings were. It's even easier to write a negative review trashing a film like, say, any Saw movie. Then there's A Christmas Prince, which makes writing a review feel like squeezing molasses out of a pinhole.  It's so effortfully bland that it's no fun to talk about, and it's even less fun to watch.

Sure, there are some solid bad-good moments, like the poorly thought-out set design (a cover photo in the background of the magazine publishing office has a headline that just reads "Pop Singer") or the fact that this is set in the fictional land of Aldovia, which is presumably in Eastern Europe given its small size and disproportionate orphan population, but every character just has a British accent because we're not really pretending that this isn't Prince Harry fan fiction.

But otherwise, this is listlessly predictable drivel that even Jane Austen would judge as being too chaste for her liking. Does the girl get the Prince? I mean, yeah. Duh. Is the lead character clumsy in a way that's supposed to make her flawed enough to be believable, but also not enough that we will notice when it's totally dropped midway through act 2? Hell yes! Are there stakes present within a hundred mile radius? Unfortunately not. A Christmas Prince has been getting a lot of buzz due to this notorious Tweet from Netflix, but really those viral marketing geniuses should have turned their sights toward that other scrap of streaming holiday fare... 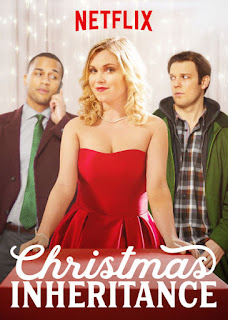 The heiress of a Christmas gift company (?) must fulfill her father's annual tradition with his business partner, delivering him a Christmas letter incognito in the small town of Snow Falls, in order to prove her worthiness at taking over the company. While she's trapped by a snowstorm, she learns the true meaning of Christmas giving from the small town hicks she is forced to spend time with.

Do you feel that spray? That's the water A Christmas Prince is being blown out of. Christmas Inheritance is everything I was looking for from a terrible Hallmark Christmas spectacular. For one thing, the cast is infinitely better, featuring a couple people I've actually heard of. Jake Lacy for one, who was engineered in a lab to be the perfect bland white love interest and has actually been in real movies (Obvious Child, How to Be Single, Miss Sloane, Carol). The other being Andie MacDowell, who was last seen being a deliciously campy cougar in Magic Mike XXL, and who delivers what would be called an extended cameo if she wasn't in so damn much of the movie.

Toss them into a Canadian tax shelter helmed by the writer of Cube 2: Hypercube, and you've got yourself a recipe for something pretty special. This is exactly what I was imagining when we sat down to watch A Christmas Prince: a workplace that's weirdly specific and Christmas related, a non-threatening small town love interest with an ice sculpting habit and an ex-wife (proving he's marriage material and giving him a wounded, sensitive heart in one fell swoop), and an infinitely contrived plot (there's no reason for the main character to be incognito except to add a wrinkle right when it seems impossibly obvious that they should end up together, and the importance the entire town places on this Christmas Letter tradition is frankly mystifying).

There is such a plethora of bad-good fun to be had here, the best example being the magically elastic size of this small town (Snow Falls is so small they have no cell service and only one taxi, but it's big enough to need a taxi, but also that taxi is run by the guy who manages the hotel, and there's only one diner that's the central spot in town, except there's also a huge bar and grill where an important leg of the love triangle takes place, and there's only one cop and one homeless person, but there's also a huge Apple store, and I'm just so confused). But I also had a great time with the Mickey Mouse saxophone score that follows every emotion like a curious little brother, the constant bizarre dialogue about the true meaning of Christmas, and just every contrived scrap of this plot, which doesn't feel overlong somehow even though it lasts a good ten minutes longer than any TV movie has any right to be.

There's just one thing that sinks the movie like a stone. The main character has a rude, businessman fiancé who we're not supposed to be too terribly cut up about her leaving. This is all par for the course, but that fiancé is one of only two black men in the movie, and the theme of a city woman finding joy in the fundamentals of life does involve her leaving an interracial relationship to return to a Pillsbury Doughboy of a man in a small town filled with almost exclusively white people. I'm going to optimistically assume that this was a hideously misguided attempt at showcasing diversity in casting instead of a conscious political move, but that's pretty disgusting in today's political climate. So... that happened. For me, it was just another element of its campy, clueless fundamentalism, but I'm not really the right person to dig into exactly how damaging this is. It just needed to be mentioned before we close out.

Anyway, I had a lot of fun with Christmas Inheritance. It provided me exactly what I wanted: a glimpse into the fantasies of the type of people who watch and make these movies, and as a psychological portrait of a world I have no part of, it was extremely delightful.

Now, just for fun, a list of things that both films have exactly in common:
Word Count: 1233
Reviews In This Series
A Christmas Prince (Zamm, 2017)
A Christmas Prince: The Royal Wedding (Schultz, 2018)
Also sprach Brennan at 7:14 AM